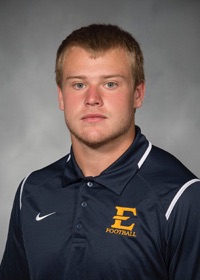 2021 (R-Sophomore): Named to the SoCon Fall All-Academic Team … Earned a spot on the Media All-SoCon First Team … Appeared in all 13 games for the Bucs … Served as the primary long snapper in each of ETSU’s 13 outings.

2020 (R-Sophomore)*: Named to both the SoCon Honor Roll and the SoCon All-Academic Team … Appeared in all six games for the Bucs, serving as the primary long snapper for the season … Made his collegiate debut in the season opener against Samford (Feb. 20).