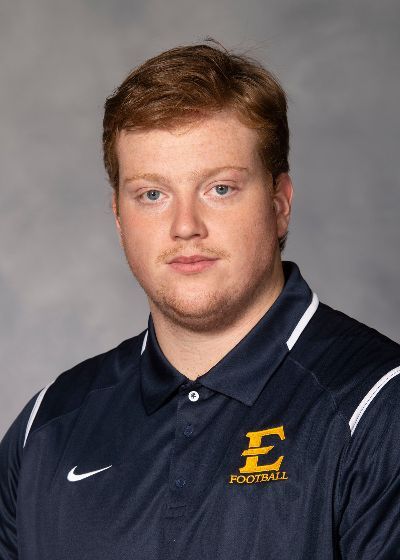 2021 (Junior): Was the key man at center for the Bucs, starting all 13 games for the Bucs during their SoCon Championship season … Named to the Phil Steele Magazine Fourth Team All-SoCon … Blocked for the most historic rushing performance in ETSU history with a pair of 1,000-yard rushers … ETSU rushed for 2,775 yards and 32 touchdowns on the season … In his 12 games played, he blocked for 10 100+ yard rushing games, including six over 200 yards on the ground.

2020 (Junior)*: Named to the SoCon Honor Roll … Appeared and started all six games at center for the Bucs, making his ETSU debut on Feb. 20 in the win over Samford … Played all 401 snaps on the season for the Blue & Gold … Finished third on the team in grade percentage, grading out at 94.8% in his 401 snaps played … Tied for the team lead in knockdowns with 13 … Had a season-high three knockdowns against Furman (March 13), VMI (April 3) and Mercer (April 10).

North Dakota State
2019 (R-Freshman): Member of the Bison football team through December before attending Iowa Western CC … Appeared in one game against Butler in the season opener at Target Field.

2018 (Freshman): Named to the MVFC Honor Roll … Redshirted as a true freshman.

Personal: Son of Mike and Jody Schreiber … Has two brothers, Michael and Will … Father, Mike, played collegiate basketball at Marist and then professionally in Lithuania.