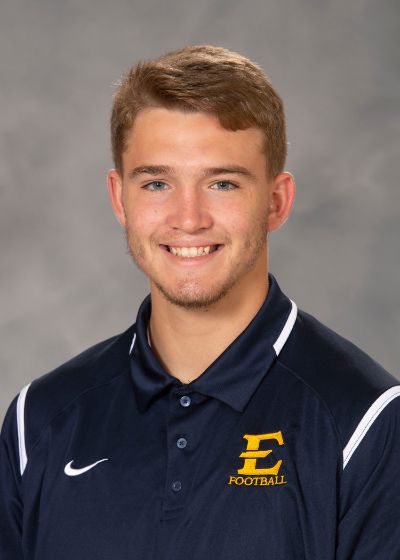 2021 (R-Freshman): Named to the SoCon All-Academic Team … Appeared in all 13 games for ETSU, primarily used on special teams … Finished the year with four tackles … Biggest play of the year was in the FCS Playoffs second round win over Kennesaw State (Dec. 4) with a recovery on ETSU’s onside kick, allowing the Bucs to pull off the game-winning drive.

2020 (R-Freshman)*: Named to both the SoCon Honor Roll and SoCon All-Academic Team … Awarded the SoCon Commissioner’s Medal … Appeared in all six games for the Bucs, primarily as a blocker or on the special teams unit … Made his collegiate debut in the season opener against Samford (Feb. 20).

High School: Football letterwinner at Nolensville High School … Two-time all-region selection and earned all-state honors in 2017 … Finished with 25 receptions for 412 yards and five touchdowns in 2018, while totaling 45 receptions for 547 yards in 2017 … Posted 30 tackles, three sacks, 7.5 tackles for loss, three forced fumbles and two interceptions as a linebacker in 2018 … Recorded 109 tackles, three sacks, 10 tackles for loss and four forced fumbles in 2017.