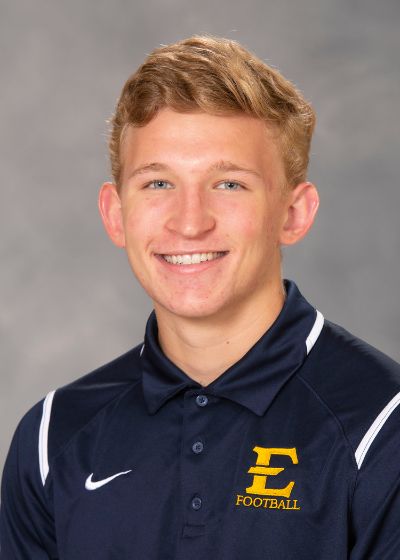 2021 (Sophomore): Named to the SoCon All-Academic Team … Earned a spot on the Coaches Second Team All-SoCon and the Media First Team … Has turned into one of the program’s most elite kickers … Appeared in all 13 games for the Bucs … Concluded the season 18-for-23 in field goal attempts and was a perfect 51-of-51 in extra points (setting a new program record for extra points in a single season) … His 18 field goals made is second in program history for a single season … Second on the team in scoring with 105 points, the most points by a kicker in program history and third-most points by any Buccaneer in a single season … Also concluded the year with 80 kickoffs for 4,665 yards (58.3 avg.) and 16 touchbacks … Twice named SoCon Special Team Player of the Week (Sept. 27 & Nov. 8) … Season-high three field goals made in the 23-3 season-opening win at Vanderbilt (Sept. 4) … Tied the program record for extra points made in a single game with eight at Western Carolina (Nov. 13) … Buried a 27-yard chip shot to send the game into overtime in the 55-48 win over Samford (Sept. 25) … Connected for a season-long 51-yard field goal at Chattanooga (Oct. 16) … Also, can get the job done defensively with two tackles on the year … Named Preseason First Team All-SoCon … Enters his junior season fifth all-time in scoring (210), third all-time in PATs (93) and second all-time in field goals made (39).

2020 (Sophomore)*: Named to both the SoCon Honor Roll and SoCon All-Academic Team … Named to the CoSIDA Academic All-District squad … Earned a spot on the Coaches & Media Second Team All-Socon … Named SoCon Player of the Week on March 29 after his record-setting performance in the win over Western Carolina (March 27) … Named Preseason All-SoCon Second Team … Appeared in all six games for the Bucs as the place kicker and kickoff specialist … Finished the season 7-of-10 in field goals, including 1-for-1 in field goals over 50 yards as he knocked in a program-record 54-yard field goal in the win over the Catamounts … Successfully buried all 15 extra-point attempts, finishing the season second on the squad in scoring with 36 points … Finished a perfect 2-for-2 twice on the season against Furman (March 13) and Mercer (April 10), including a 49-yard field goal against the Bears … Concluded the season with 27 kickoff attempts for 1,573 yards (58.3 avg.) … Recorded 10 touchbacks on the season … Best kickoff performance came against Western Carolina where he laced five kickoffs for 308 yards (61.6 avg.) and three touchbacks.

2019 (Freshman): Named to the SoCon Honor Roll … Named to the All-Freshman SoCon Team … Appeared in 12 games as a true freshman for the Bucs … Buried 14 field goals on the season, ranking third most in a single season in ETSU history … Finished a perfect 27-of-27 in PAT … Concluded the campaign with 69 points, ranking second-most in a single season by a kicker in program history, while leading the Bucs in total scoring … Knocked in 77.8% of his field goals for the season, finishing 14-of-18 … Buried a career-long 48-yard attempt against Austin Peay (Sept. 21) … Recorded two field goals on four different occasions during the season, with the final one being a two-field goal contest against Western Carolina on Nov. 9 … Made at least one field goal in 10 consecutive games from Shorter (Sept. 7) to Mercer (Nov. 16) … Put together a season-best of six consecutive field goals from Austin Peay (Sept. 21) to Chattanooga (Oct. 17).

High School: Multisport athlete from Chiles High School, lettering in both football and soccer … Made six field goals and 32 extra points in 2017 … Made a 32-yard field goal and all six extra-point attempts in 47-20 win over Deltona on Nov. 3, 2018 … Connected on a 46-yard field goal against Florida High … Set a school record with four made field goals – hitting from 40, 33, 27 and 22 yards as a junior at Chiles.