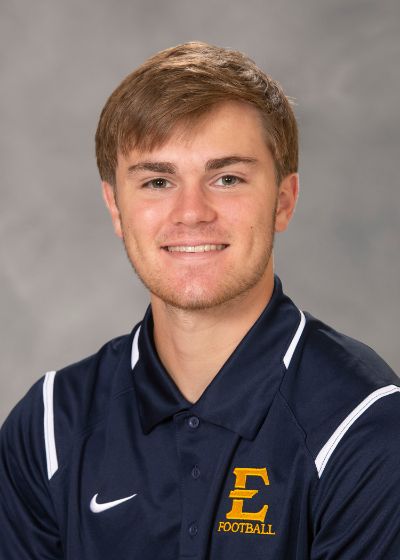 2021 (Sophomore): Appeared in five games for ETSU, missing significant time with an injury … Recorded 14 punts for 585 yards, averaging 41.8 yards per punt … Tallied the seventh-longest punt in program history when he boomed a 76-yard punt against The Citadel (Oct. 9), finishing the game with an average of 56.7 yards per attempt … Recorded three punts over 50 yards and downed the opponent inside their own 20-yard line five times on the year.

2020 (Sophomore)*: Finalist for FCS Punter of the Year ... Appeared in all six games for the Bucs, serving as the primary punter … Finished the year with 28 punts for 1,131 yards, averaging 40.4 yards per punt … Notched a career-long 61-yard punt in the win over VMI, finishing the game with three punts for 125 yards … Of his 28 punts, only one resulted in a touchback … Booted eight punts inside the opponent 20-yard line, while lacing five punts over 50 yards … Punted the ball for a season-high six times on three occasions, racking up a career-best 265 yards punting against Furman (March 13).

2019 (Freshman): Appeared in 12 games as a true freshman for the Bucs … Finished the season with 58 punts for 2,249 yards … Averaged 38.8 yards per punt … Career-long 60-yard punt against Samford (Oct. 26) … Recorded a season-best 263 yards punting in the season opener at Appalachian State (Aug. 31), including his first collegiate punt of 44 yards that pinned the Mountaineers inside their own five yard line … Punted seven times against VMI (Sept. 14), marking a career high in attempts for a single game.

High School: Multisport athlete from Oakland High School, lettered in football and soccer … Named Tennessee Titans Mr. Football Kicker of the Year … Made five field goals, including a long of 37 and made 55 extra points … Averaged 43 yards per punt … Registered 57 touchbacks on kickoffs … Oakland went 14-1 and won the TSSAA Division I Class 6A State Championship.