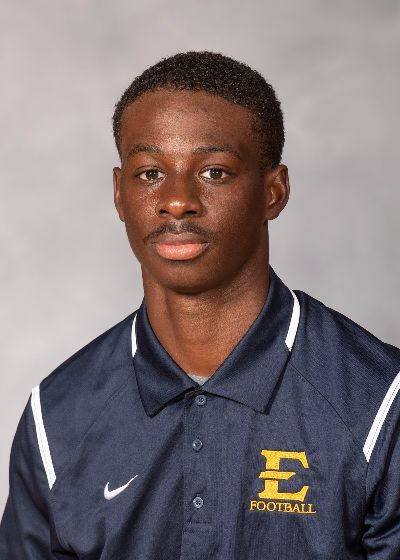 2021 (R-Senior): Impactful player in his one year with ETSU, appearing in 13 games with 11 starts on the campaign … Finished second on the team in receptions (38), while tying for the team lead in receiving touchdowns with five … Concluded the year with 381 receiving yards, averaging 10.0 per catch … Averaged 29.3 yards per game and hauled in a season-long reception of 43 yards three times: Vanderbilt (Sept. 4), UVA Wise (Sept. 11) and Mercer (Nov. 20) … Also rushed the ball three times for 32 yards … Recorded a season-best of 73 receiving yards in the win over Mercer on Nov. 20, doing so with five catches and two touchdowns … Season-high six receptions in the FCS Quarterfinals game at North Dakota State (Dec. 11), finishing with 40 yards … Recorded back-to-back touchdown performances in the win at Vanderbilt and home against UVA Wise … Arguably the biggest touchdown of his season came with nine seconds remaining to give ETSU the 17-13 win at Furman, defeating the Paladins in Greenville, S.C. for the first time since 1997.

Previous School(s)
Georgia Southern
2020 (R-Senior): Played in all 13 games, starting four … Saw action on 340 total snaps (302 on offense, 38 on special teams) … Led the team with 21 catches for 260 yards … Had one touchdown … Had two catches for 18 yards against Campbell in the opener … Caught four passes for 68 yards and a score against UMass … Started the scoring with a 47-yard touchdown on the opening drive … Caught two passes for 46 yards at Coastal Carolina … Had a 43-yard run on the opening drive against Louisiana Tech in the R+L Carriers New Orleans Bowl … Named to the Sun Belt Honor Roll.

2019 (R-Junior): Played in all 13 games, starting five … Saw action on 340 offensive plays … Led the squad with 20 receptions for 195 yards and two touchdowns … Also carried the ball seven times for 38 yards … Was on the field for 16 offensive snaps in the opener at No. 6 LSU … Had a 2-yard reception against the Tigers … Had four catches for 27 yards at South Alabama and 26 against Coastal Carolina … Caught three passes for 95 yards and two touchdowns against Troy … Both of his touchdown receptions came from beyond 30 yards … Had four catches for 19 yards against Liberty in the Cure Bowl … Made the Sun Belt Honor Roll in the fall and the President's List in the spring for a 4.00 GPA … Named to the 2019-20 Sun Belt Conference Commissioner’s List for maintaining a 3.50 GPA or higher.

2016 (Freshman): Joined the team as a walk-on … Used the year to redshirt as a true freshman.

Personal: Son of Monique and Rod Murray … Has an older brother, RJ, who played football at Georgia Southern … Also has three other siblings: Brittanee, David and Payton.