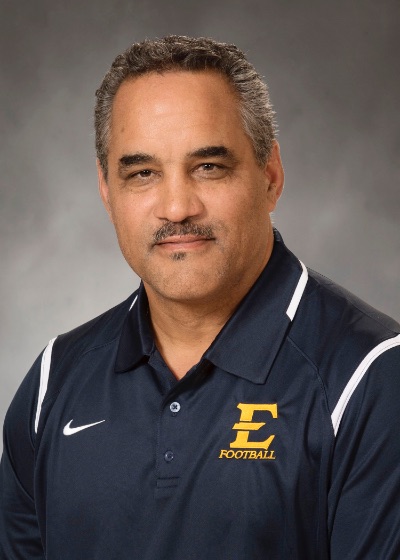 Steve Brown remains on staff for Coach Quarles heading into the 2022 season. Brown joined Randy Sanders’ staff as a defensive backs coach on Jan. 11, 2018 and finished his fourth season following the 2021 fall campaign.

In his four seasons with the Bucs’ secondary, Brown has turned the team into an elite force against opposing offenses. Brown’s secondary has totaled 34 of the team’s 42 interceptions the last four seasons and has accounted for 119 pass breakups, eight fumble recoveries and seven forced fumbles.

Under Brown’s tutelage, Alijah Huzzie continued his reign, leading all ETSU defensive backs in tackles with 76. Huzzie finished second on the team in interceptions with three, while leading the squad in pass breakups (9) and forced fumbles (2). The trio of Tyree Robinson, Karon Delince and Mike Price also wreaked havoc, combining for 184 tackles, six interceptions, two forced fumbles and one fumble recovery.

In his four seasons with the Bucs, Brown has coached nine All-SoCon honorees and nine All-Americans. In addition, Brown coached Robinson two a pair of All-American honors throughout his career, as well as an invite to the 2021 Hula Bowl.

Prior to his arrival in Johnson City, Brown served as the assistant secondary coach with the Tennessee Titans from 2012-15. In his first season in Nashville, the Titans ranked seventh in the NFL in interceptions – 13 of which came from the secondary. In 2013, Tennessee’s defense led the NFL in fewest passing touchdowns (15).

Before his stint with the Titans, Brown was coaching at Kentucky from 2003-2011. The final five seasons saw Brown transition from defensive backs coach (2003-06) to the defensive coordinator (2007-11) for the Wildcats. Brown had three Kentucky players selected in the NFL Draft, while numerous Wildcats spent time in the NFL during Brown’s watch.

Brown began his coaching career with the then St. Louis Rams where he was on staff when the Rams won Super Bowl XXXIV. Brown was a defensive assistant in 1995, before coaching the cornerbacks from 1996-97. Brown later became the secondary coach from 1998-2000.

Brown, a third-round selection by the Houston Oilers in 1983, spent eight seasons playing in the NFL with the Oilers where he played in 119 games, totaled 18 interceptions and earned Pro Football Weekly NFL All-Rookie honors in 1983.

Brown played collegiately at Oregon, where he was a defensive back and kick returner from 1979-82. Brown earned first team all-Pac-10 honors in 1982, second team honors in 1981 and was a two-time honorable mention in 1979-80.Steve Brown joined Randy Sanders' staff as a defensive backs coach on Jan. 11, 2018 and finished his fourth season following the 2021 fall campaign.