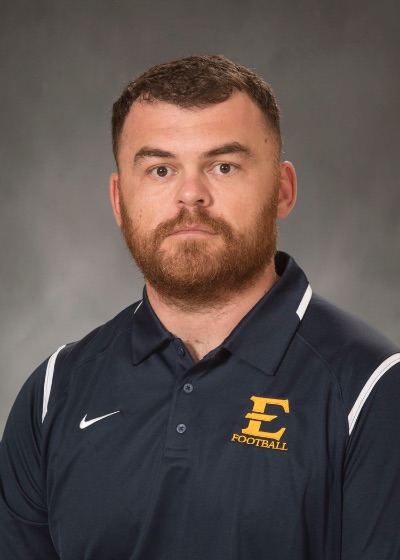 Matt McCutchan is entering his fourth season at the helm of the Buccaneer offensive line, having taken over prior to the 2018 season.

In three seasons, McCutchan has overseen a line that has enabled the Bucs in ranking fifth in the SoCon in rushing offense in 2018 and 2019, while finishing sixth in the 2021 spring season. In 2019, the Bucs averaged 171.8 yards on the ground per game, an 18-yard improvement from the 2018 campaign. McCutchan’s line blocked for Quay Holmes’ standout campaign in 2019, lifting the sophomore to 1,143 yards rushing, becoming just the sixth 1,000-yard rusher in program history and first since Gaven Varner in 2003.

In 2018, McCutchan coached Matt Pyke, arguably the most decorated player in program history. Pyke collected six All-American honors in 2018 alone and was named to both media and coaches SoCon All-Conference teams. Pyke was also awarded the Jacobs Blocking Award – given to the top lineman in the Southern Conference. Pyke also became the first offensive lineman to receive All-American honors for the Bucs since John Walton in 1969.

Tre’mond Shorts has officially etched his name into the SoCon record book under McCutchan’s guidance, earning the title of Jacobs Blocking Award winner in the 2021 spring season.

Prior to his arrival in Johnson City, McCutchan spent five seasons (2013-17) with Coach Sanders at Florida State as the offensive quality control coach, and was on staff when the Seminoles won the 2014 National Championship.

McCutchan got his first taste of coaching as a graduate assistant under Coach Sanders at his alma mater, Kentucky, from 2008-10.

McCutchan played offensive line at Kentucky from 2004-06, where he started 31 games. McCutchan was named the team’s Most Outstanding Lineman in 2005 and received the Southeastern Conference’s Lineman of the Week twice during his career. McCutchan was on the 2006 team that finished with eight wins, including a Music City Bowl victory over Clemson. McCutchan was an SEC Academic Honor Roll member and graduated with a bachelor’s degree in economics.