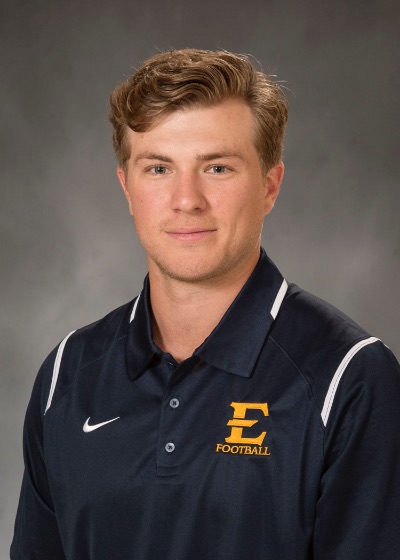 Price Partrick is entering his fifth season with the Bucs ahead of the 2022 fall season. Partrick was added to the staff in 2018 and has been in the role of Quarterbacks Coach and Director of Football Operations. Partrick is now transitioning to Tight Ends Coach for the 2022 season, while retaining his duty of operations.

The 2021 fall season saw great success from the quarterback role as Tyler Riddell orchestrated one of the better seasons in recent memory. With Partrick’s guidance, Riddell threw for the second-most touchdowns in a single season (19), third-most completions (211) and the fourth-most yards in a single season (2,464). Partrick aided Riddell in guiding the Bucs to an 11-2 overall record, a Top-10 FCS ranking, a SoCon title and reaching the FCS quarterfinals. Following the successful fall campaign, Riddell currently holds the program record for completion percentage at .614 (278-453).

In his four seasons as quarterbacks coach, Partrick’s quarterbacks accounted for 37 passing touchdowns, while completing 700-of-1,220 passes for 8,005 yards. The quarterbacks completed .574 percent of their passes under his guidance.

The 2018 season was one for the record books and would not have been possible without the captain, Austin Herink. Under the direction of Partrick, Herink finished the season with 1,825 passing yards and six touchdowns in 11 games played. Herink also rushed for four touchdowns. Herink has etched his name in the record books, finishing second all-time in pass attempts (1,048), completions (615), career completion percentage (.587), third in passing yards (6,994) and fifth in total touchdowns (33).

Prior to joining the Bucs, Partrick spent four seasons on staff at Tennessee Tech from (2014-17). During his time in Cookeville, Partrick spent the 2017 season coaching outside linebackers and nickelbacks, along with serving as the Director of Football Operations. Partrick saw numerous roles in his time with the Golden Eagles, including coaching the tight end crew in 2016 and wide receivers/offensive quality control coach in 2015. Partrick began his coaching career as a student assistant in the 2014 season, working with the wide receivers at Tennessee Tech.

The Chattanooga native has ties to the Southern Conference as he spent time on The Citadel roster in 2010. From there, he transferred to Chattanooga to rehab from shoulder surgeries. Coach Watson Brown gave him a chance to play wide receiver at Tennessee Tech the following season. After another shoulder surgery forced Partrick to miss the 2012 season, he then played in three games in 2013 before suffering a career-ending surgery, which allowed him the chance to begin his coaching career.

Partrick received his bachelor’s degree in fitness and wellness from Tennessee Tech in 2014. The Chattanooga native lettered in both football and golf at Baylor High School.