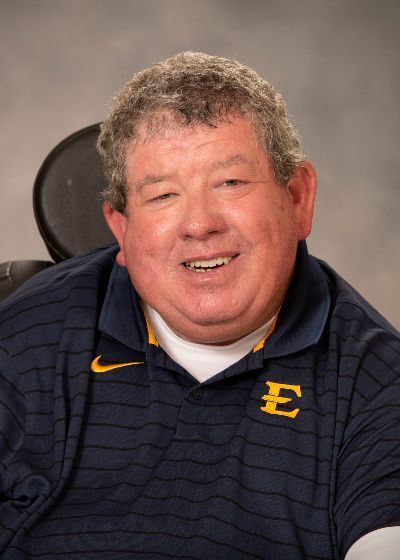 Doug Blevins is entering his second season with the Bucs, having joined the staff prior to the 2021 spring season.

In his first season with the Bucs, ETSU sophomore kicker Tyler Keltner set a program record with a 54-yard field goal in a win over Western Carolina. Keltner finished 7-of-10 in field goals under the direction of Blevins, while Garrett Taylor punted 28 times for 1,131 yards (averaging 40.4 yards per punt).

Blevins, born with cerebral palsy, has been involved with football since a very young age. Coach Blevins teaches all about the mental aspect as well as the mechanics of kicking and has been successful at the highest level that football has to offer.

Blevins became the NFL’s first handicapped coach when he joined the New York Jets in 1994 and then began a six-season career coaching with the Miami Dolphins in 1997. Blevins has mentored the likes of: Matt Turk, David Akers, Joe Nedney, Olindo Mare, Justin Tucker and Adam Vinatieri.

Blevins is a graduate of East Tennessee State with a degree in Criminal Science.