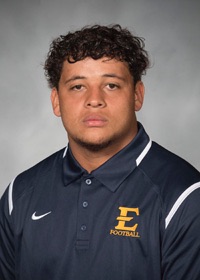 2021 (R-Junior): Appeared in all 13 games for ETSU with four starts on the campaign … Made back-to-back starts against UVA Wise (Sept. 11) and Delaware State (Sept. 18) … Continues to be a redzone threat for the Bucs, finishing the year with seven receptions for 81 yards and three touchdowns … Also rushed for 22 yards on four carries and one touchdown … Had a receiving touchdown in back-to-back games against VMI (Nov. 6) and at Western Carolina (Nov. 13) … Posted one catch in seven different games with a season-long reception of 28 yards against the Catamounts ... Also got the job done on special teams with 12 tackles.

2018 (Freshman): Redshirted as a true freshman.