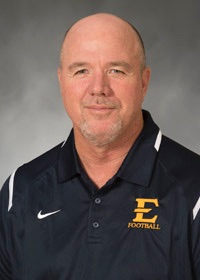 Daryl Daye spent three seasons on the Buccaneer football staff from 2017-19. After spending time as ETSU’s defensive line coach in 2017, head coach Randy Sanders promoted Daye to Special Teams Coordinator in May 2018 in addition to his defensive line role.

In his three seasons with the Bucs, Daye posted a top three SoCon defense in total defense, including leading the league in 2017 with 345.8 yards per game. The Bucs’ defensive line has registered 651 tackles, 95.5 tackles for loss and 40.5 sacks in three seasons. The 2018 season proved a dominating season on the defensive line and the special teams’ unit, leading the SoCon in defensive touchdowns (3), kick return defense (18.5) and tackles for loss per game (7.7). The Bucs also ranked second in rushing defense (132.3) and total defense (351.2). The 132.3 yards allowed rushing is the fourth-fewest yards allowed on the ground in a single season in ETSU history.

In 2017, ETSU’s defense was one of the tops in the Southern Conference as the Blue and Gold ranked third in total defense (345.8). The Bucs also ranked third in the league in pass defense (172.5) and fourth in pass defense efficiency (131.9). As a unit, the Bucs held the opposition to 10 points or less four times, while holding Robert Morris (three points) and VMI (six points) without a touchdown.

Daye coached the likes of Nasir Player who finished fifth in ETSU history in tackles for loss with 40. Player has been named to six all-conference teams throughout his career and six All-American teams, including three in 2019.

The special teams saw great success under the tenure of Daye as he oversaw the all-time leader in field goals, JJ Jerman. Jerman finished with 53 career field goals and 253 career points. Jerman also holds the record for the most field goals made in a single season in ETSU history with 19 and successfully knocked in 94-of-95 PATs. Most recently in 2019, Daye coached freshman kicker Tyler Keltner who buried 14 field goals on the season, the second-most in a single season in program history.

In his time with the Bucs, Daye has coached a total of 18 Southern Conference All-SoCon honorees and seven All-Americans.