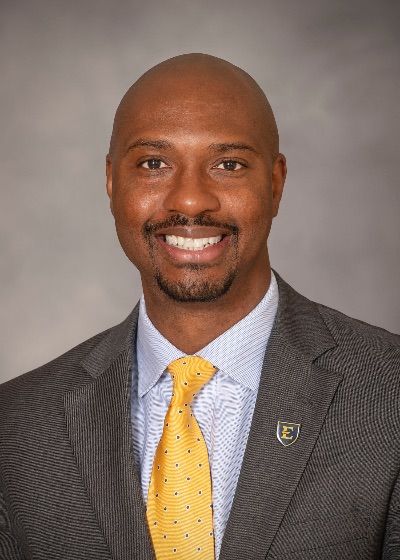 Mantoris Robinson was named to Coach Oliver's staff on April 19, 2021.

Robinson, a two-time Big South Conference Defensive Player of the Year, has nine years experience coaching at the collegiate level. Robinson spent the last three seasons with Earl Grant at College of Charleston, while having a four-year stint at Appalachian State and two years at Fairmont State University in West Virginia.

“Mantoris will be a great asset to our university, program and our coaching staff,” said Oliver. “His championship pedigree as a player and coach brings 17 years of college basketball experience to Johnson City. He has established himself as a strong recruiter, specifically in the southeast, and has a unique rapport with players to help fuel their development and experiences as student-athletes. He is not only a rising star in our profession but will bring a tireless work ethic, selfless attitude, and a team-first approach to our ETSU family.”

“My family and I are excited to join the Buccaneer family,” said Robinson. “I want to thank Coach Oliver for this opportunity and look forward to being on his staff. We share the same vision and values and are ready to help the student-athletes grow both on and off the court.”

During his time at College of Charleston, the Cougars were one of the top teams nationally in fewest turnovers, ranking in the top 20 all three years. In his first year in Charleston, Robinson helped guide the Cougars to a 24-9 record and a 12-6 mark in CAA play. The Cougars advanced to the semifinals of the 2018 CAA Tournament, while also knocking off Memphis in the Advocare Invitational and defeated VCU on the road during regular season play. Overall, five Cougars earned all-CAA honors under Robinson’s watch, while two players received Student-Athlete of the Year accolades.

Robinson played at Winthrop from 2006-10 where he helped guide the Eagles to three NCAA Tournament appearances, including a first-round win over Notre Dame in 2007. Robinson played in 126 career games, totaling 755 points, 593 rebounds, 138 steals and 137 assists. The 6-foot-5 forward, was named MVP of the 2010 Big South Tournament.

As a prep star at Butler, he was an all-state and all-conference performer and helped lead his team to a 28-3 mark as a senior. He also played for one season at Fork Union Military Academy before beginning his collegiate career at Winthrop.