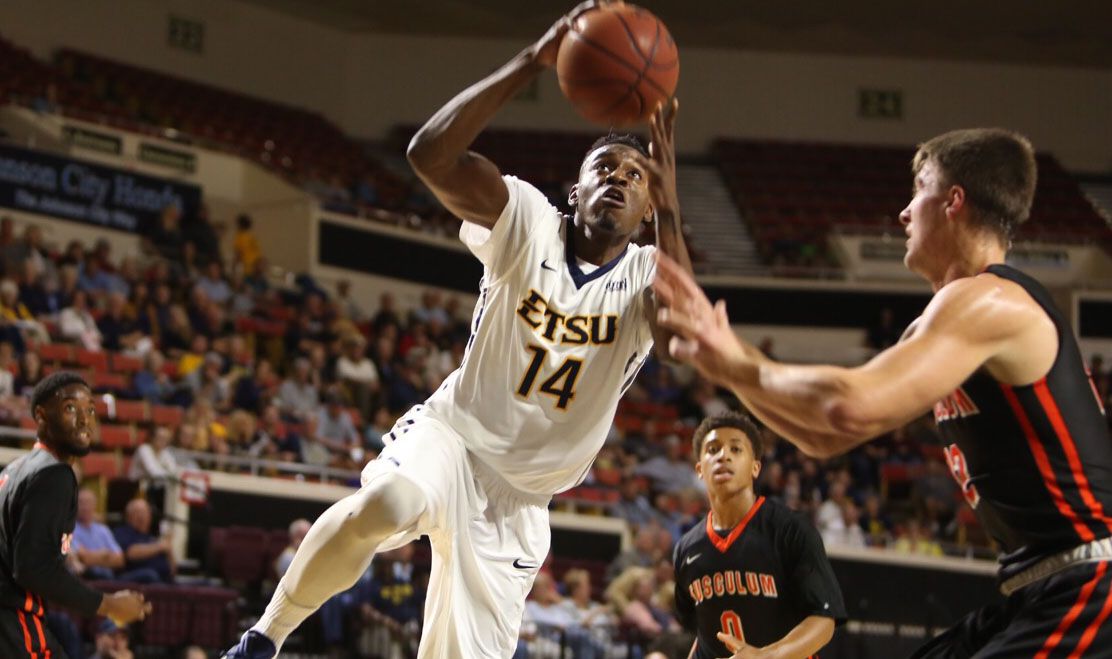 Led by a game-high 20 points from senior guard Deuce Bello (Greensboro, N.C.) and 19 points from fellow senior guard Ge’Lawn Guyn (Lexington, Ky.), the Buccaneers shot a sterling 57 percent from the field and 53 percent from 3-point range. With no one playing more than 22 minutes in the contest, Forbes said ETSU’s depth was on display.

“Our strength is in our numbers and I think everyone saw that tonight,” Forbes said. “We got a lot of players in the game and 11 to 12 played double-digit minutes, so that’s what we wanted. I thought Deuce did an unbelievable job and really sparked us tonight.”

Along with Bello and Guyn, junior guard A.J. Merriweather (Jackson) played a solid 15 minutes with 13 points, five rebounds and three steals, while junior guard T.J. Cromer (Albany, Ga.) pitched in 12 points. The Bucs outscored the Pioneers 54-18 in the paint and outrebounded Tusculum 43-28 on the evening.

Bello certainly lived up to the preseason hype during the first 20 minutes against the Pioneers, scoring nine straight points to power a 17-3 offensive run and staking the Bucs to a 21-9 lead midway through the half. During that stretch, Bellow sprang off the floor for an electric put-back dunk and also connected on back-to-back 3 pointers. He finished with 16 points in the first half.

While the offense ultimately shot 54.5 percent from the floor and 57 percent from 3-point range in the first half, the Bucs’ also deployed a full court man-to-man defense for the entire 20 minutes and held the Pioneers to just 38 percent shooting from the floor. ETSU also forced eight turnovers before the break.

Along with Bello, preseason All-Southern Conference selection A.J. Merriweather (Jackson) provided his usual energy on both ends of the floor, as the junior guard scored 10 points and grabbed four rebounds prior to the intermission.

After the break, the Bucs wasted little time expanding their lead, as a 17-8 run was highlighted by a pair of 3-pointers from senior transfer guard Ge’Lawn Guyn (Lexington, Ky.) and made the score 67-39 with 16 minutes left in regulation.

The ETSU advantage grew to as many as 38 points at 81-43 following another 14-2 burst, but at that point Tusculum enjoyed its best offensive stretch of the night thanks to four-straight 3-pointers to manufacture a 16-0 run of its own and cut the ETSU lead to 81-57 with just over eight minutes left in the game.

A quick timeout by Forbes did the trick to stop the Pioneers’ run, as ETSU responded with its own 10-3 spurt to reclaim a 31-point advantage at 91-60. From there, the Bucs ultimately eclipsed the 100-point mark and wrapped up the 32-point victory.

For the game, Tusculum had three players reach double figures, led by forward Zach Hartle’s 21 points. The Pioneers shot 44 percent from the floor and a strong 44 percent from 3-point range, hitting 12 shots from beyond the arc.

The Buccaneers will be back in action on Saturday, Nov. 14 at 4 p.m., taking on Averett in the regular season opener at Freedom Hall. For more on ETSU men’s basketball throughout the 2015-16 season, visit ETSUBucs.com and click on the men’s hoops link.