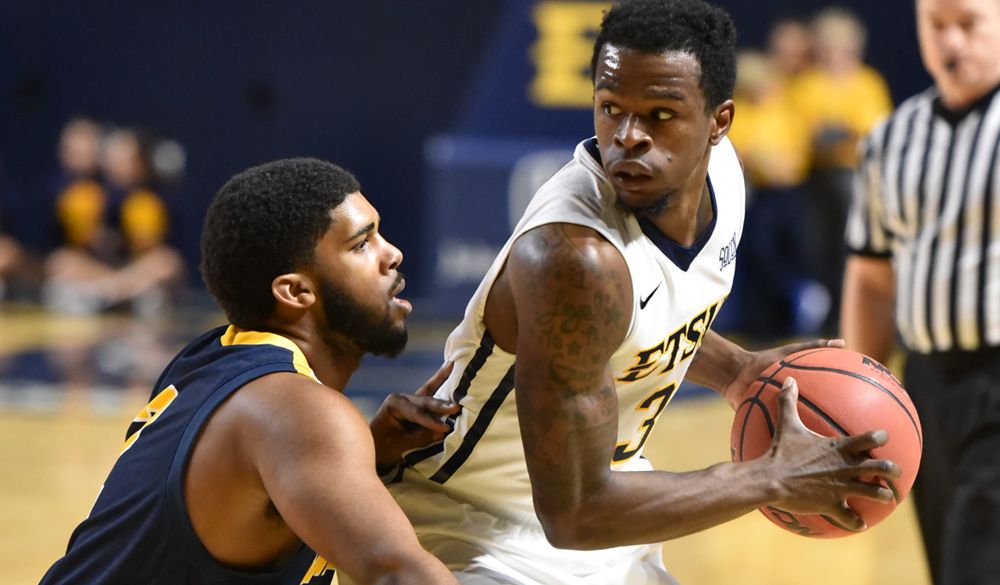 JOHNSON CITY, Tenn. (Nov. 14, 2015) – Thanks to a game-high 19 points each from senior guard Ge’Lawn Guyn (Lexington, Ky.) and junior guard T.J. Cromer (Albany, Ga.), Steve Forbes made a victorious debut as head coach of the ETSU men’s basketball with a 107-59 win over Averett University Saturday afternoon inside Freedom Hall.

The game was a nice warm-up for the Buccaneers, who will next face Green Bay in a nationally-televised matchup on ESPN2 at 6 a.m. next Tuesday morning. The game will be part of ESPN’s annual 24-hour college basketball marathon.

Green Bay is coming off a 93-89 loss at Stanford in overtime on Friday night.

“What I was looking for was improvement on defense and I think I saw that tonight – especially in the second half,” Forbes said. “We played a bit smaller tonight at times because of playing a non-traditional type of team, but I think we did a good job adjusting to that. I was really pleased overall with how we played.”

Along with Guyn and Cromer, the Bucs also got a double-double effort from A.J. Merriweather (Jackson), as the junior guard finished with 17 points and 10 rebounds. In addition, senior guard Deuce Bello (Greensboro, N.C.) posted a 16-point effort, while sophomore guard Desonta Bradford (Humboldt) was the fifth ETSU player to reach double figures with 11.

To Averett’s credit, the Cougars never led in the game yet managed to stay close in the early going. In fact, with 12:17 left in the first half, the score stood 16-14 in favor of ETSU, but at that point the Bucs went to a smaller lineup and outscored the Cougars 31-12 the rest of the way to take a 21-point lead into the break at 47-26.

In the first half, ETSU shot a strong 50 percent from the field and 92 percent from the foul line. The Bucs were led by Bello with 12 points. Meanwhile, the ETSU defense held the Cougars to just 36 percent shooting from the floor and an 18 percent clip from 3-point range.

After the break, Guyn asserted himself offensively, scoring 12 points over the next 10 minutes of play and helping extend the ETSU lead to 78-45 with 8:43 left in the contest. The ETSU lead ultimately grew to as many as 48 points in the second half.

For the game, ETSU shot 54 percent from the field and 82 percent at the foul line, holding the Averett shooting percentage to just 32 percent from the floor and 21 percent from beyond the arc. The Bucs also held a 49-33 advantage on the boards, outscored the Cougars 48-22 in the paint, and also posted a 29-7 edge in points off turnovers.

The Bucs will return to action bright and early on Tuesday, taking on Green Bay at 6 a.m. on ESPN2.