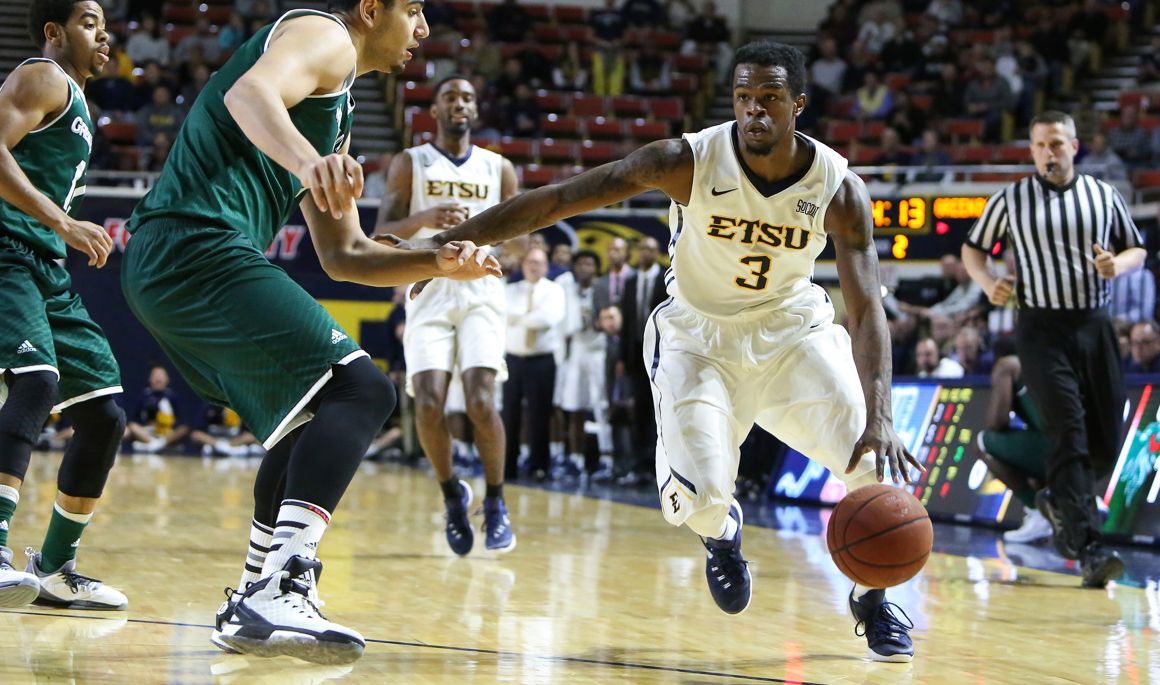 With a 6 a.m. tip time as part of ESPN’s annual 24-hour college basketball marathon, a raucous crowd of 3,992 looked on as the Buccaneers overcame an early 15-4 deficit to improve to 2-0 on the season. Senior guard Ge’Lawn Guyn (Lexington, Ky.) led the way with a game-high 26 points and four other ETSU players reached double figures in the victory.

While Green Bay dropped to 0-2 on the year after falling in overtime to Stanford in its season opener on Friday night, the Bucs eclipsed the 100-point mark in back-to-back games for the first time since the 2005-06 season.

“What a great win for our program,” said ETSU’s first-year head coach Steve Forbes. “Playing on ESPN is such a showcase for our school and our city, and I think our fans did a great job of showing up. They helped us because the atmosphere was great.

“I think our depth wore them down. I’ve said it all along that we are a deep team and I think that was a difference today. They have a really nice team, so this is a big win for us.”

The Bucs certainly displayed their depth in this one, as 11 players saw action and ETSU’s bench players outscored the Phoenix, 36-16. One of those that stood out off the bench was junior forward Benny Lufile (Burlington, Ontario, Canada), who provided a first-half spark and finished the game with 10 points and seven rebounds.

For Green Bay, the trio of guard Carrington Love, along with posts Kenneth Lowe and Jordan Fouse proved challenging for the Bucs. Lowe finished with 23 points and nine rebounds, Love pitched in 22 points, and Fouse ended the game with a double-double effort courtesy of 15 points and 13 rebounds.

The Bucs looked a bit sluggish in the early going, as the Phoenix jumped out to a 15-4 lead four minutes into the game and forced Forbes to call timeout. After the break, ETSU responded behind the play of Lufile, as the Bucs outscored Green Bay 31-11 over the next 10 minutes to take a 35-26 advantage.

ETSU’s lead grew to as many as 11 late in the first half, but the Phoenix scored four points over the final minute of play to make it 48-41 at the break. In the first half, Lufile finished with a team-high 10 points and six rebounds, as the Bucs shot 48 percent from the floor and out-rebounded Green Bay 27-22.

For the second straight game, Guyn asserted himself in the second half. After Green Bay got to within four at 58-54, Guyn scored the Bucs’ next 11 points to hold the Phoenix at bay.

Leading by six with 10 minutes left, a 3-pointer by senior forward Lester Wilson (Knoxville) helped ignite the Bucs’ offense and increased the lead to double digits, where it remained the rest of the game.

For the game, ETSU shot 51 percent from the floor and 91 percent at the foul line. The Bucs also held Green Bay to just 41 percent shooting and a 26.7 percent clip from 3-point range. ETSU also dished out 17 assists on the night.

After a pair of home games, the Bucs will now hit the road for three straight road contests beginning Friday evening at Villanova. Game time against the Wildcats is set for 7 p.m. in Philadelphia, Pa.