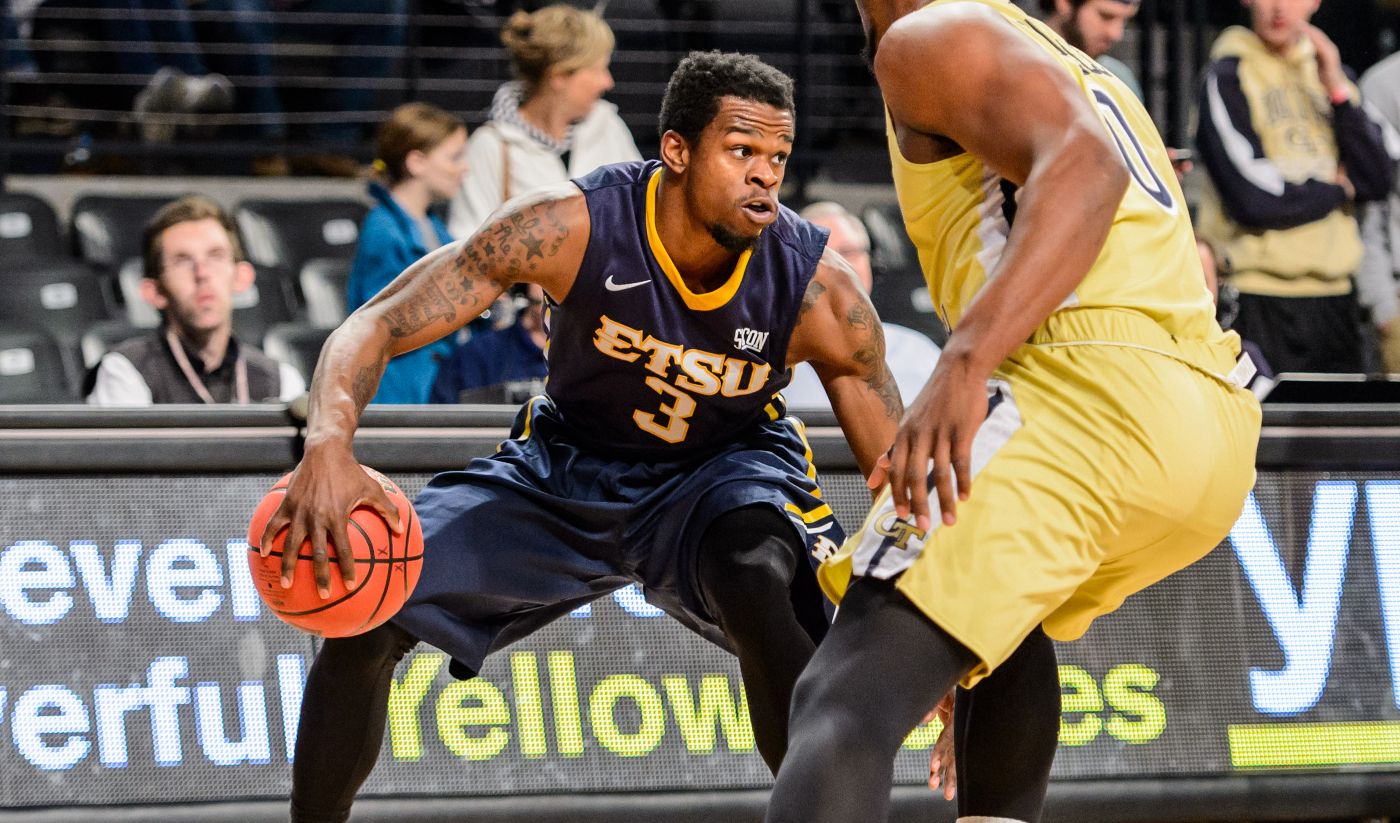 ATLANTA (Nov. 22, 2015) – It may be his first season with the ETSU men’s basketball team, but Ge’Lawn Guyn (Lexington, Ky.) did not wait long to make some history.

The senior transfer guard took over in the final minutes of Sunday’s game at Georgia Tech, ultimately hitting the game-winning 3-pointer with one second left on the clock to give the Buccaneers’ a dramatic 69-68 come-from-behind victory over the Yellow Jackets inside McCamish Pavilion.

It was the first win for the Buccaneers over an Atlantic Coast Conference opponent since besting N.C. State in 1991, and is the program’s first win over Georgia Tech since the 1978-79 season. With the victory, ETSU improves to 3-1 on the season, while the Jackets drop to 3-1 on the year.

“I wrote one word on the board in the locker room today and that was ‘compete’, and I thought we did that by competing for a full 20 minutes and giving ourselves a chance at the end,” said ETSU head coach Steve Forbes. “We needed someone to make a big play and Ge’Lawn made a big shot. We haven’t run that play all year long or even practiced it. Coach (Jason) Shay drew it up in the timeout, and it was a play we ran at Tennessee one time to get a good shot against Arkansas. The guys did a great job of executing something that haven’t really practiced. You like to see that. It’s a nice win for us.”

Guyn finished with a game-high 24 points, but his play in the final minutes was exceptional. With Georgia Tech trying to maintain a precarious single-digit lead, Guyn scored eight straight points during one stretch to make it 63-62 in favor of the Tech. At that point, he blocked a shot, picked up the loose ball and found a streaking Deuce Bello (Greensboro, N.C.) for a go-ahead layup to make it 64-63 in favor of ETSU.

Tech later led 67-66 and had guard Marcus Georges-Hunt at the line for two free throws. Georges-Hunt missed the front end of the two-shot opportunity with eight seconds left, giving the Bucs a shot at the end. After a timeout, senior forward Lester Wilson (Knoxville) in-bounded the ball to Guyn, who came off a ball screen from junior Isaac Banks (New Orleans, La.) before taking the game-winning shot from the top of the key.

Along with Guyn, the Bucs got double-figure scoring from junior guards T.J. Cromer (Albany, Ga.) and A.J. Merriweather (Jackson), both of whom finished with 12 points apiece. As a team, the Bucs played aggressively in the paint against the larger Yellow Jackets, finishing with a 36-22 advantage on points in the paint and a 14-6 edge on second chance points.

For GT, Georges-Hunt had a team-high 20 points, while Nick Jacobs pitched in 13.

In the first half, ETSU held its own against the highly-touted Yellow Jackets’ inside game, outscoring Georgia Tech 18-12 in the paint. That ability to drive the lane and score inside helped the Bucs build a lead of as many as seven points at 19-12 midway through the half.

Unfortunately, the Jackets responded at that point by outscoring ETSU 20-4 over the next seven minutes of game play to take a 32-23 lead. A layup by Guyn and a pair of free throws by Merriweather closed out the half for ETSU, and the Bucs trailed 32-27 at the break.

After the intermission, Tech again pulled away by eight points at 40-32, but the Bucs would not relent on the Jackets’ home floor, slowly working their way back into it and setting up Guyn’s heroics.

ETSU finished the game shooting 47 percent from the field and committed just seven turnovers on the night. Meanwhile, the Bucs defense held Tech to 41 percent shooting from the floor and 29 percent from 3-point range.

The Bucs will now move on to the final game of this current three-game road trip, traveling to Charleston, S.C. to take on Charleston Southern on Tuesday, Nov. 22. Tip in the Buc Dome is set for 7:30 p.m.