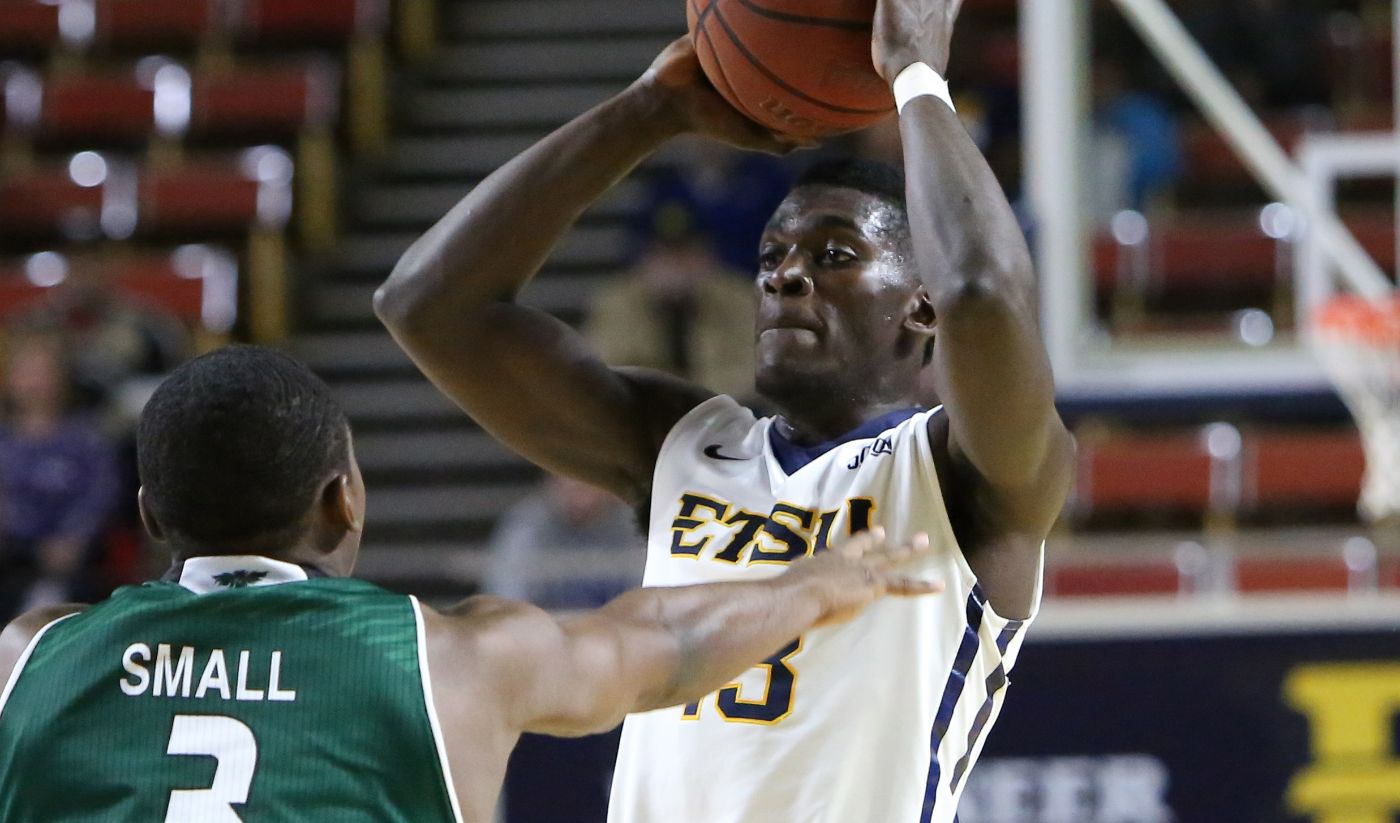 NORTH CHARLESTON, S.C. (Nov. 24, 2015) – Falling behind by 16 points in the first half, the ETSU men’s basketball team manufactured a valiant rally in the second half Tuesday night, but the comeback ultimately fell one-point short in a 77-76 loss to Charleston Southern inside the Buc Dome.

Having not led at any point in the game, ETSU junior guard A.J. Merriweather (Jackson) was fouled and went to the line with 3.6 seconds left on the clock with a chance to give his team its first lead of the night. Unfortunately, Merriweather missed both opportunities and allowed CSU to escape with the victory.

With the loss, ETSU drops to 3-2 overall on the season and wrapped up its current three-game, six-day road with a 1-2 record. Meanwhile, Charleston Southern improved to 2-3 on the young season.

CSU hurt ETSU from beyond the arc and under the basket on the offensive end. For the game, Charleston Southern was 11-of-19 from 3-point range (57.9 percent) and out-rebounded the Bucs 34-31. That edge in the post also helped CSU outscore the Bucs 34-28 in the paint and 19-14 on second chance points.

ETSU battled back behind the play of Merriweather, who finished with 17 points and 10 rebounds, while senior guard Ge’Lawn Guyn (Lexington, Ky.) scored a game-high 23 points. Adding to the offensive output were junior guard T.J. Cromer (Albany, Ga.) and senior guard Deuce Bello (Greensboro, N.C.), both of whom finished with 13 points each.

For Charleston Southern, Armel Potter had a team-high 18 points, while Raemond Robinson and Javis Howard added 14 and 13 points, respectively.

The first half was not pretty for the Bucs from Johnson City, as Charleston Southern shot 60 percent from 3-point range (6-of-10) and out-rebounded ETSU 21-15 in the opening 20 minutes. Those numbers helped CSU build a lead of as many as 16 points at 30-14 with seven minutes left before the intermission.

At that point, Bello, Guyn and Merriweather all connected from 3-point range on three-straight possessions and helped fuel a 17-6 run that pulled ETSU to within five at 36-31. However, CSU answered the ETSU run by closing out the half with an 8-0 burst of its own to make it 44-31 at the break.

After the intermission, ETSU seemed to gain some energy and life, especially behind the play of Guyn. The senior guard scored 11 straight points during one stretch, powering a 21-9 run to open the half and make it 53-52 in favor of CSU with 10 minutes left in regulation.

Charleston Southern then answered with an 8-2 run of its own and ultimately held a 68-61 lead with six minutes left in the game. ETSU again battled back to within two points multiple times over the next five minutes, and still trailed by only three at 77-74 with 33 seconds remaining in regulation.

At that point, CSU’s Danny Upchurch missed the front end of a one-and-one opportunity, and Guyn raced to the other end for a layup that made it 77-76. ETSU fouled again and this time Armel Potter missed the free throw setting up ETSU’s offense with 10 seconds left.

Merriweather ended up with the ball on ETSU’s final possession and drove to the basket, where he was fouled and went to the line. He missed the first of two free throws and CSU called timeout. After the break, Merriweather missed his second opportunity which would have tied the game.

ETSU will now return home for a post-Thanksgiving matchup with non-conference foe UNC Wilmington at 4 p.m. Saturday afternoon inside Freedom Hall. For more on ETSU men’s basketball throughout the 2015-16 season, visit ETSUBucs.com and click on the men’s hoops link.