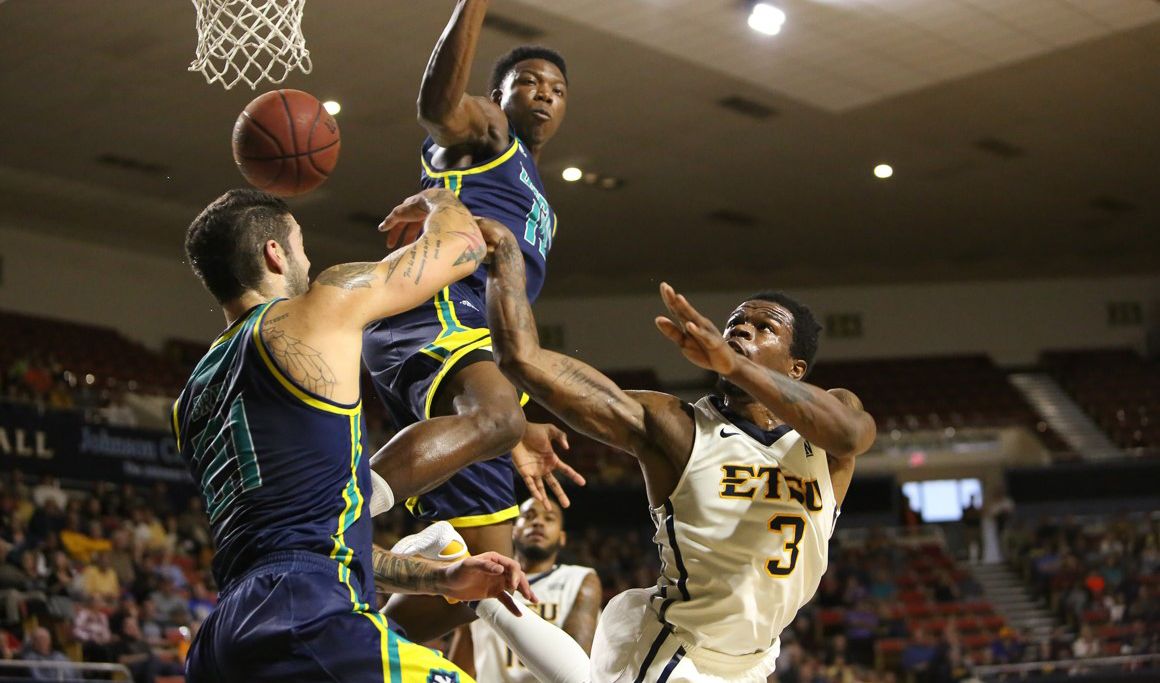 JOHNSON CITY, Tenn. (Nov. 28, 2015) – Committing a season-high 21 turnovers and being out-rebounded 39-24 for the game, the ETSU men’s basketball team had no answers for an undefeated UNC Wilmington squad in a 94-73 loss to the Seahawks Saturday afternoon inside Freedom Hall.

A crowd of 2,557 looked on as the Buccaneers, who dropped to 3-3 on the year, tried to make a game of it early in the second half when junior guard T.J. Cromer (Albany, Ga.) connected on a 3-pointer to pull ETSU to within eight points at 48-40. However, UNCW responded to that threat with a lightning quick 13-0 offensive run to make it 61-40 and the Seahawks never looked back. With the win, UNC Wilmington improves to a perfect 4-0 on the year.

“I thought today we thoroughly got whipped in every aspect of the game,” said ETSU first-year head coach Steve Forbes. “Coming into the game we knew they were a really good team defensively with their pressure defense and we couldn’t turn the ball over. I thought our preparation was good, but we had 21 turnovers and you just can’t win any games turning the ball over 21 times. Then we got manhandled on the glass by 15 rebounds and we didn’t have an offensive rebound until the last media timeout of the second half. I don’t think I’ve ever seen that in my entire coaching career.

“So, we have to be accountable across the board, both coaches and players. We have to go back and try to fix this thing.”

Along with the turnover and rebounding numbers, the Seahawks also shot an impressive 58.6 percent from the field and 37 percent from 3-point range. UNCW was led by Chris Flemmings 18 points, while four other teammates reached double figures.

The Seahawks lived up to their reputation in the first half, utilizing an aggressive full court defense and a torrid offensive pace to force 12 ETSU turnovers and shoot 53 percent from the field. UNCW also held a decisive advantage on the glass before the break, out-rebounding the Bucs 21-13. Those numbers helped the Seahawks build a lead of as many as 18 points at 48-30 with 1:54 left before the intermission.

At that point, ETSU answered with a 7-0 run and finished the half within striking distance at 48-37. ETSU managed to keep the Seahawks within range by shooting 67 percent from 3-point range (6-of-9) in the first half.

After the break, Cromer’s 3-pointer made it 48-40 with less than a minute gone in the half, but from there the Bucs were outscored 46-33 the rest of the way.

For the game, the Bucs got a game-high 20 points from Cromer, who went 4-of-5 from 3-point range, while senior guard Ge’Lawn Guyn (Lexington, Ky.) netted 18 in the losing effort.

The Bucs will return to action on the road Dec. 2 when they travel to Cookeville to take on Tennessee Tech. Tip is set for 7 p.m. (EST). For more on ETSU men’s basketball throughout the 2015-16 season, visit ETSUBucs.com and click on the men’s hoops link.