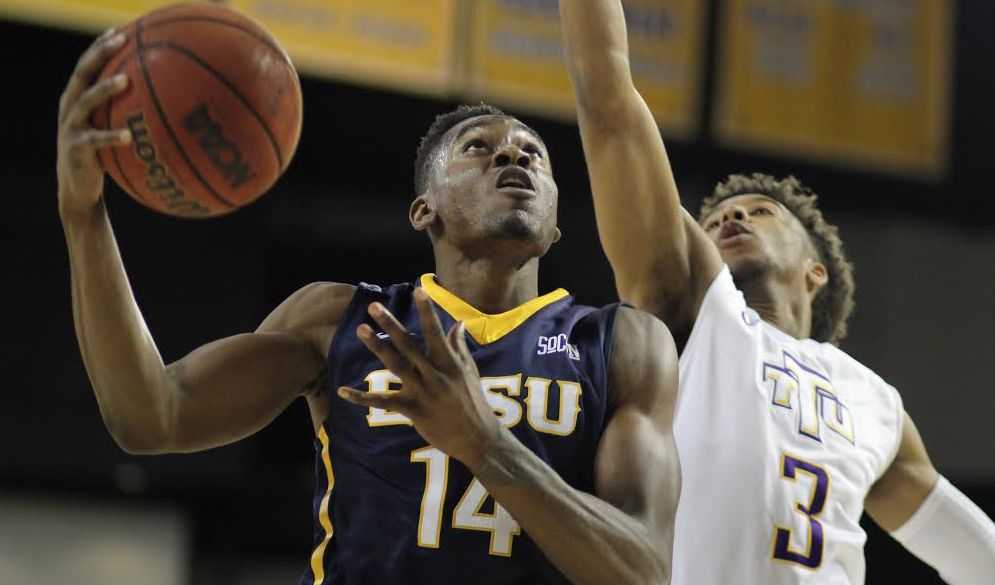 COOKEVILLE, Tenn. (Dec. 2, 2015) – It may be the season of giving, but the charity stripe was certainly not kind to the ETSU men’s basketball team on Wednesday evening inside Tennessee Tech’s Eblen Center.

Despite holding Tennessee Tech to just three made field goals in the second half, the Buccaneers watched the Golden Eagles go 23-of-26 from the free throw line in the second half to overcome a 15-point ETSU lead and win at home, 63-61. ETSU, which drops to 3-4 on the season, had a shot to win in the final seconds, but three attempts missed the mark on the final possession, including a potential game-tying jumper by senior guard Ge’Lawn Guyn (Lexington, Ky.) at the buzzer.

In total, TTU – which improved to 6-2 and has won five straight games – shot 38 free throws in the game compared to just nine for ETSU. The Golden Eagles also enjoyed a 51-34 rebounding advantage.

“When they go to the line 38 times and we foul 29 times that’s a problem. I guess we foul too much,” said ETSU head coach Steve Forbes. “I thought our guys played hard tonight. I challenged them to play with intensity and fight for the whole game and I thought we did that. When you get up by 15 with 10 minutes left in the game the only way for them come back is to shoot with the clock stopped, and that’s what happened.”

Tech shot just 29 percent from the floor for the game, but was 31-of-38 (82 percent) at the foul line. The Golden Eagles got a game-high 18 points and 14 rebounds in a double-double effort from forward Ryan Martin, while guard Torrance Rowe added 11.

Having struggled on the boards in recent games, ETSU once again watched Tennessee Tech exploit that weakness to out-rebound the Bucs 24-16 in the first half. Combined with ETSU’s issues on the offensive end of the floor – the Bucs shot just 35 percent from the field and 13 percent from 3-point range in the first 20 minutes – the Golden Eagles built a lead of as many as five points and ultimately held at 31-28 advantage at the intermission. A bright spot for the Bucs in the first half was the play of Jurkin, who led ETSU with eight points and six rebounds prior to the break.

While ETSU was unable to manufacture a significant offensive run in the first half, the Bucs wasted little time scoring points in the second half. Clamping down on the defensive end and holding Tennessee Tech to just one made field goal over the first 10 minutes of play, ETSU went on a 22-4 run to build a 50-35 lead.

Unfortunately for the Bucs, one by-product of the increased defensive effort was more foul calls on the Blue and Gold, allowing Tennessee Tech to reach the bonus with a full 11 minutes left in regulation. TTU used that advantage to full effect, going 9-of-9 from the free throw line to power an 11-2 run and make it 52-46 in favor of ETSU with eight minutes left on the clock.

At that point, Tech continued to go to the line time after time, hitting another 12-of-15 shots at the charity stripe and ultimately taking the decisive 63-61 lead.

Even with all the foul shots for Tennessee Tech, ETSU still had a chance for the win with a final possession and 22 seconds left on the clock. The Bucs had three shots at a score, but Cromer’s runner in the lane rimmed out, a tap at the rim missed, and a final desperation jumper by Guyn came up short, allowing TTU to escape with the win.

The Bucs will now take an eight day break for fall semester finals before returning to action at home on Thursday, Dec. 10 against Milligan. Tip inside Freedom Hall is set for 7 p.m. For more on ETSU men’s basketball throughout the 2015-16 season, visit ETSUBucs.com and click on the men’s hoops link.