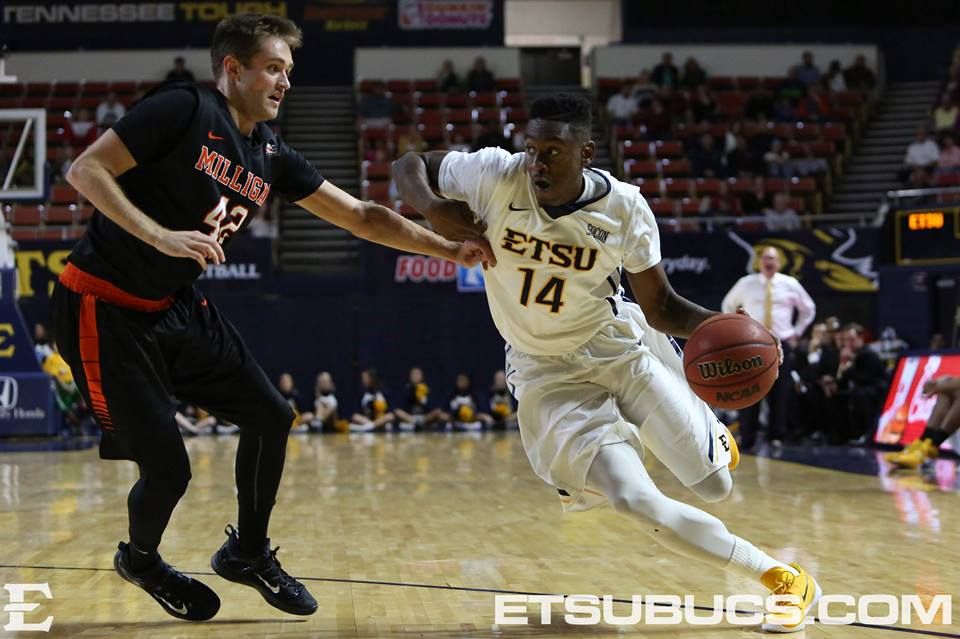 ASHEVILLE, N.C. (Dec. 15, 2015) – With final exams now completed, the ETSU men’s basketball team returns to the court and begins its stretch of holiday games with a trip to UNC Asheville Tuesday night. Tip inside Kimmel Arena is set for 7 p.m.

The game will air locally on WAPK-TV (check local listings), and will also be available via bigsouthsports.com. The Buccaneer Sports Network will also provide live play-by-play coverage via its radio and web streaming affiliates.

The Buccaneers, who improved to 4-4 and snapped a three-game losing streak last week with a 51-point trouncing of Milligan College, will be looking to win for the first time on the road since defeating ACC opponent Georgia Tech back on Nov. 20.

JOHNSON CITY, Tenn. (Dec. 10, 2015) – Senior guard Petey McClain (Mobile, Ala.) scored a career-high 12 points and four other Buccaneers reached double-figure scoring, as the ETSU men’s basketball team out-rebounded Milligan Collge 55-33 and forced 21 turnovers in a 98-47 win over the Buffaloes inside Freedom Hall. ... With the win, ETSU improves to 4-4 on the season. Meanwhile, Milligan stands at 8-3 on the year. ... The Bucs also outscored Milligan 42-18 in the paint, 31-8 off turnovers, and held a 52-17 advantage in bench points. Along with McClain’s 12-point effort, the Bucs got a game-high 18 points from senior guard Ge’Lawn Guyn (Lexington, Ky.) and 13 from fellow senior guard Deuce Bello (Greensboro, N.C.). Meanwhile, junior posts Isaac Banks (New Orleans, La.) and Benny Lufile (Burlington, Ontario, Canada) both posted double-doubles, with Banks finishing with 11 points and 10 rebounds, while Lufile collected 11 points and 11 boards. ... Both teams struggled offensively early in the game, as the score stood 6-2 in favor of ETSU seven minutes into the contest. Following the second media timeout, however, the Bucs came out with a renewed intensity on the defensive end of the floor, which helped ETSU power to a 28-9 offensive run to make it 34-11 with six minutes left before the intermission. ... McClain helped stir the ETSU offensive out of the early funk by scoring seven straight points during one stretch and finished with nine in the first half. Meanwhile, Bello netted a game-high 11 points in the first half, as ETSU out-rebounded Milligan 30-18 and forced 14 turnovers en route to a 49-22 halftime lead. ... After the break, the Bucs kept the pressure on and never let up, progressively adding to their advantage and ultimately finishing with their largest lead of the game at 51 points.

The series vs. UNC Asheville

The Buccaneers and Bulldogs have had 21 previous meetings, with ETSU holding a 15-6 advantage in the all-time series ... The Bucs have won six straight in the series, including a victory in the last game back on Nov. 22, 2014.

Last time out against UNC Asheville

JOHNSON CITY (Nov. 22, 2014) – Tying a school record with 15 made 3-pointers as a team and powered by a game-high 31 points from senior guard Rashawn Rembert (Tampa, Fla.), the ETSU men’s basketball won an offensive showcase 98-87 over non-conference opponent UNC Asheville inside Freedom Hall. ... With ETSU shooting 53 percent from the field and the Bulldogs connecting on a 52 percent clip for the night, a total of eight players scored in double figures with four on each team. While Rembert finished with 31, teammates such as senior guard Jalen Riley (Racine, Wis.) netted 16, guard Devin Harris (Tampa, Fla.) collected 12, and senior post Ron Giplaye (Lowell, Mass.) pitched in an important 10 points. ... Giplaye also just missed on a double-double, collecting nine rebounds and three steals in his best performance as a Buccaneer. Harris’ points and three made 3-pointers were also career bests for the sophomore. ... While the offense was impressive, the defensive numbers were critical to the Bucs’ success. ETSU forced Asheville into 23 turnovers and swiped 13 steals, while the Bucs gave up the basketball just 11 times on the night. ... With two talented offensive teams on the floor, the first half was a shootout. Both squads shot over 50 percent from the field before the intermission, with ETSU ultimately using a 22-10 run over the final six minutes to lead 53-42 at the break. The Bucs ended up connecting on nine 3-pointers in the first half, led by three each from Rembert and Harris. ... Asheville’s Andrew Rowsey was equally impressive, hitting four threes of his own before half and netting 17 points in all. The key for the Bucs was creating 13 Asheville turnovers. ... After the break, ETSU continued to bomb away from outside and built a lead of as many as 15 at 69-54 with just over 12 minutes left in the game. However, Asheville slowly worked its way back into the contest and got to within four at 88-84 with four minutes left on the clock. ... At that point though, a free throw by sophomore guard A.J. Merriweather (Jackson), a layup by junior guard Petey McClain (Mobile, Ala.), followed by a steal and a score by Riley helped the Bucs back out to a nine-point advantage and basically iced the game.

Senior guard Ge’Lawn Guyn’s game-winning shot at Georgia Tech (11/22) is just the most recent indictation of the play he has displayed so far at ETSU ... Heading into the Milligan matchup, Guyn leads the Bucs in scoring (18.3 ppg), assists (2.6 apg), blocks (1.3 bpg), and is tied for third on the team in rebounding (4.1 rpg) ... The rebound and block numbers are most impressive considering Guyn plays the point guard position.

When transfer junior guard T.J. Cromer (Albany, Ga.) joined the Buccaneers, he was touted as a scoring threat and a player that would provide some offensive bunch ... Cromer has lived up to that billing, and is currently second on the team with 14.1 points per game.

Already a 1,000-point scorer, senior forward Lester Wilson (Knoxville) has an opportunity to put his name in the ETSU basketball record books again this season as the most prolific 3-point shooter in school history ... Currently ranking 5th on the career list with 218 makes from beyond the arc, Wilson finds himself 58 makes behind the program leader Courtney Pigram (Memphis), who made 276 3-pointers during his career from 2005-09 ... Wilson has averaged 70 makes a year during his previous three seasons at ETSU, meaning if he can replicate his “average” this year he should have a shot to take the top spot.