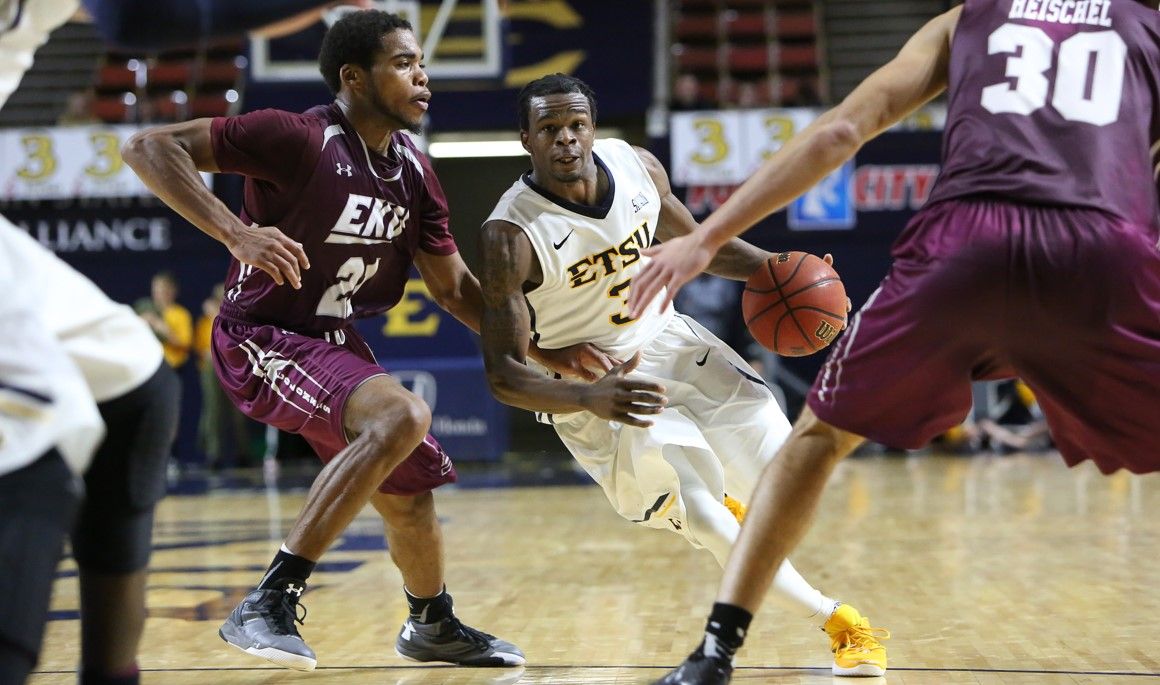 Along with Guyn’s big night, the Bucs also enjoyed a 22-point effort from junior guard T.J. Cromer (Albany, Ga.), as the Buccaneers shot an impressive 55 percent from the floor and 53 percent from 3-point range on their way to improving to 5-5 on the season. Meanwhile, the Colonels dropped to 8-5 on the year.

“I was really pleased with the way our kids responded tonight, especially coming off the loss at Asheville,” said ETSU head coach Steve Forbes, whose team will now prepare for a meeting with in-state foe Tennessee on Dec. 22. “We had good energy tonight and that’s the team we know we have. That’s the way we are capable of playing. It was great to see it all come together, and our ability to hang in there late when they made their run.”

Along with the strong shooting numbers, the Bucs also out-rebounded the Colonels 29-26 and forced EKU into 21 turnovers. The depth of the ETSU bench also played a major role in the game, as the Bucs’ reserves outscored the Colonels’ bench, 25-8.

Having struggled to start well offensively in recent games, that same issue stung the Bucs again against the Colonels, as they fell behind by 14 points at 21-7 with just over 12 minutes left before the break.

At that point, however, ETSU found its scoring rhythm thanks primarily to the efforts of Cromer, who scored 10 of the Bucs’ next 28 points to help ETSU outscore EKU 28-15 for the remainder of the half and finish one point back of the Colonels at 36-35 heading into the intermission.

Cromer ended the half with a game-high 11 points, as the Bucs shot 52 percent from the field and 50 percent from 3-point range in the opening 20 minutes.

After the break, the Bucs continued to play well on the offensive end of the floor. After falling behind 46-44, ETSU embarked on an impressive 14-2 run that gave the Bucs a 58-48 lead. In the end, ETSU led by as many as 12 in the second half, but looked on as EKU slowly chipped away at that advantage and ultimately tied the game at 71-71 with 4:24 left on the clock.

A thunderous dunk by senior guard Deuce Bello (Greensboro, N.C.) off a missed shot then seemed to give the momentum back to ETSU, as the Bucs outscored EKU 8-3 over the next two minutes to go back up five at 79-74. While the Colonels again tied the game at 79, Guyn’s sixth 3-pointer of the night with 1:28 left in regulation gave ETSU the lead back and the Bucs never relinquished their advantage the rest of the game.

Other solid efforts for the Bucs included a nine-point, three-rebound performance in just 11 minutes of floor time from junior post Peter Jurkin (Juba, South Sudan), while Cromer also finished with seven rebounds and five assists to go with his 22 points.

For Eastern Kentucky, Jarelle Reischel scored a game-high 29 points and teammate Javonte Hawkins netted 23 points. Both players shot an impressive 8-of-13 from the field and the two combined to go 6-of-10 from 3-point range.

The Bucs will be back in action on the road next Tuesday, Dec. 22, traveling to Knoxville to take on Tennessee at 7 p.m. inside Thompson-Boling Arena.