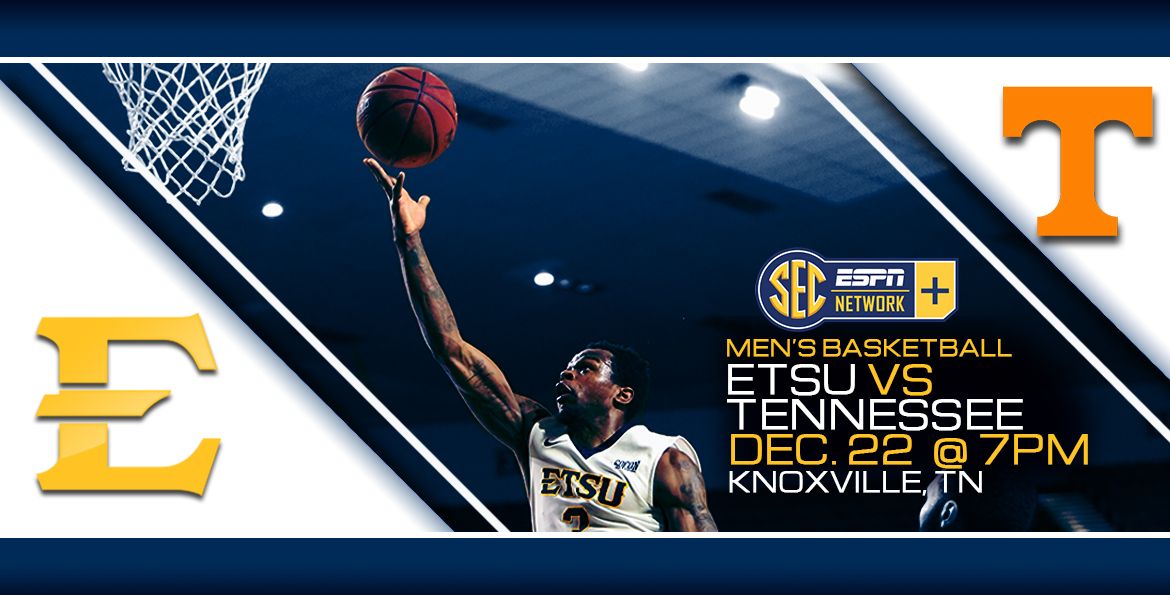 This will be the 16th meeting all-time between the Bucs and Vols.
Forbes returns to UT Tuesday night, but this time on ETSU bench
ETSU at Tennessee | December 22, 2015
Related Links

KNOXVILLE, Tenn. (Dec. 22, 2015) – There will be an air of nostalgia in the building for ETSU head coach Steve Forbes when his Buccaneers take the floor Tuesday night against Southeastern Conference foe Tennessee at Thompson-Boling Arena.

The Bucs and Volunteers will tip at 7 p.m. in the 16th meeting all-time between the in-state rivals.

Forbes, who was an assistant coach under then Tennessee head coach Bruce Pearl from 2006 to 2011, was part of a Tennessee coaching staff that brought unprecedented success to the Volunteers in the “modern” era. This time, however, Forbes will be directing the Buccaneers (5-5) against the Volunteers (5-5), and will be looking for the team’s second win this season over a “Power 5 Conference” opponent – the Bucs defeated Georgia Tech 69-68 back on Nov. 22.

The game will air on the SEC Network Plus outlets and through the Watch ESPN App, while the Buccaneer Sports Network will provide the live radio and web streaming broadcast via ETSUBucs.com.

Along with Guyn’s big night, the Bucs also enjoyed a 22-point effort from junior guard T.J. Cromer (Albany, Ga.), as the Buccaneers shot an impressive 55 percent from the floor and 53 percent from 3-point range on their way to improving to 5-5 on the season. Meanwhile, the Colonels dropped to 8-5 on the year. ... Having struggled to start well offensively in recent games, that same issue stung the Bucs again against the Colonels, as they fell behind by 14 points at 21-7 with just over 12 minutes left before the break. ... At that point, however, ETSU found its scoring rhythm thanks primarily to the efforts of Cromer, who scored 10 of the Bucs’ next 28 points to help ETSU outscore EKU 28-15 for the remainder of the half and finish one point back of the Colonels at 36-35 heading into the intermission. ... After the break, the Bucs continued to play well on the offensive end of the floor. After falling behind 46-44, ETSU embarked on an impressive 14-2 run that gave the Bucs a 58-48 lead. In the end, ETSU led by as many as 12 in the second half, but looked on as EKU slowly chipped away at that advantage and ultimately tied the game at 71-71 with 4:24 left on the clock. ... A thunderous dunk by senior guard Deuce Bello (Greensboro, N.C.) off a missed shot then seemed to give the momentum back to ETSU, as the Bucs outscored EKU 8-3 over the next two minutes to go back up five at 79-74. While the Colonels again tied the game at 79, Guyn’s sixth 3-pointer of the night with 1:28 left in regulation gave ETSU the lead back and the Bucs never relinquished their advantage the rest of the game.

The series vs. Tennessee

Last time out against Tennessee

KNOXVILLE (Dec. 31, 2014) – Leading by four points midway through the second half, the ETSU men’s basketball team suffered through an eight-minute scoring drought, allowing SEC opponent Tennessee to regain the lead and escape with a 71-61 non-conference victory over the Buccaneers inside Thompson-Boling Arena. ... The Bucs (6-4) led 56-52 with 9:39 left, but did not hit another field goal until 1:07 left in regulation. During that time, Tennessee – which finished with a 38-20 rebounding advantage for the game – used its size advantage to go on a 19-5 run and close out the game. ETSU did hit an impressive 13 3-pointers in the contest, but it was not enough to upend the Volunteers. ... Senior guard Rashawn Rembert (Tampa, Fla.) had seven of the Bucs’ 13 made 3-pointers, scoring a game-high 21 points, while junior forward Lester Wilson (Knoxville) hit four threes and finished with 16. ... The Bucs got off to a great start, as Rembert hit three straight 3-pointers and a thunderous dunk by A.J. Merriweather (Jackson) helped ETSU build an early 13-0 lead. Tennessee responded though, putting together a 22-7 run over the next 10 minutes to take the advantage 22-20 with seven minutes left before the half. ... Tennessee’s lead grew to as many as seven at 32-25 before Rembert closed the half with another pair of 3-pointers to make it 32-31 at the break. In the first half, the Bucs shot 41 percent from 3-point range and Rembert led the way with a game-high 18 points. ... ETSU’s 3-point attack caught fire again early in the second half, as Rembert connected for his seventh three of the game and Wilson hit a pair, pushing the Bucs back out to a 44-40 lead with 14:57 remaining in regulation. ... The Bucs continued to answer Tennessee’s offensive punches over the next six minutes, but with 7:17 left on the clock, the Vols did manage to finally take a 57-56 lead and never looked back.

Senior guard Ge’Lawn Guyn’s game-winning shot at Georgia Tech (11/22) is just the most obvious indictation of the play and leadership he has displayed so far at ETSU ... Heading into the Tennessee matchup, Guyn leads the Bucs in scoring (18.0 ppg) and blocks (1.0 bpg), is second in steals (1.2 spg), third in assists (2.2 apg), and fourth in rebounding (3.6 rpg) ... The rebound and block numbers are most impressive considering Guyn plays primarily the point guard position.

When transfer junior guard T.J. Cromer (Albany, Ga.) joined the Buccaneers, he was touted as a scoring threat and a player that would provide some offensive bunch ... Cromer has lived up to that billing, and is currently second on the team with 14.8 points per game. ... In the Bucs’ last game against Eastern Kentucky, Cromer showed a balanced offensive attack, setting or matching career highs for points (22), assists (5), rebounds (7) and free throws (8).

Already a 1,000-point scorer, senior forward Lester Wilson (Knoxville) has an opportunity to put his name in the ETSU basketball record books again this season as the most prolific 3-point shooter in school history ... Currently ranking 5th on the career list with 218 makes from beyond the arc, Wilson finds himself 58 makes behind the program leader Courtney Pigram (Memphis), who made 276 3-pointers during his career from 2005-09 ... Wilson has averaged 70 makes a year during his previous three seasons at ETSU, meaning if he can replicate his “average” this year he should have a shot to take the top spot.