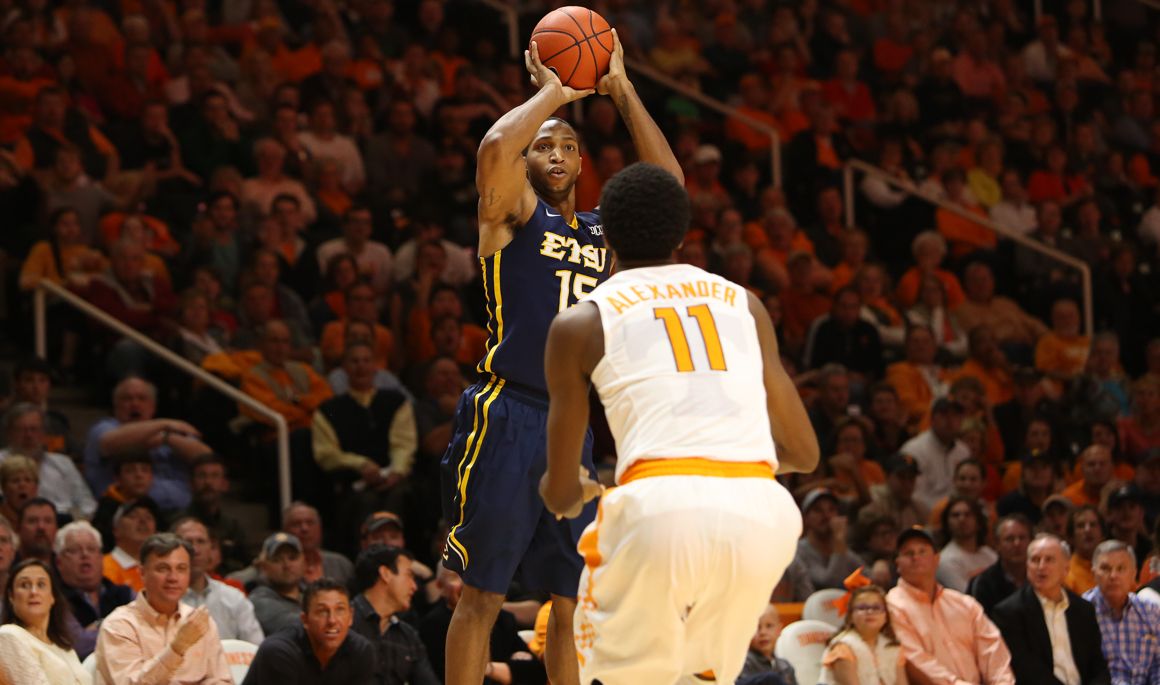 KNOXVILLE, Tenn. (Dec. 22, 2015) – For 36 minutes, the ETSU men’s basketball team put itself in position to enjoy a holiday victory over the Tennessee Volunteers. Unfortunately for the Buccaneers, the final four minutes of the game did not go as planned.

Leading the Vols 65-61 with 4:35 left in regulation, the Bucs looked on as Tennessee closed the game with a 15-2 offensive run to take a 76-67 win over ETSU Tuesday evening inside Thompson-Boling Arena. With the victory, UT improves to 6-5 on the season, while the Bucs dropped to 5-6.

“I was proud of the way we played and fought tonight, but I hate it for our players and fans that we couldn’t get it done,” said ETSU head coach Steve Forbes. “We were in really good position late in the game and just didn’t make plays. That’s my fault and we can correct those mistakes. This team is coming together and showing a lot of improvement. We know what we need to do.”

The Bucs got a game-high 22 points from senior guard Ge’Lawn Guyn (Lexington, Ky.), while junior guard A.J. Merriweather (Jackson) pitched in 11. In addition, senior forward Lester Wilson (Knoxville) had his best game of the year so far with nine points and five rebounds in just nine minutes of action.

The Bucs kept the deficit in single digits the rest of the first half, but still trailed 42-33 at the break. However, before leaving the floor, Forbes was called for a technical foul following a brief conversation with an official. That technical would provide inspiration for the Bucs in the second half.

After Tennessee made one of two free throws on the technical foul, the Bucs found a renewed energy and opened the second half by outscoring the Vols 14-4 to take the lead 47-46 on a thunderous dunk by Deuce Bello (Greensboro, N.C.) with 14 minutes to go in the game.

Both teams went back-and-forth from there, but with four minutes left back-to-back jumpers by T.J. Cromer (Albany, Ga.) lifted the Bucs to a 65-61 lead. From there, the Vols regained the advantage with a 6-0 run, but a layup by Bello made it 67-67 with two minutes remaining. After trading possessions, UT had the ball with 1:11 left and got guard Detrick Mostella open for a made 3-pointer on the right wing.

Down 70-67, the Bucs designed a play to try and tie the game with a 3-pointer, but a turnover by Guyn led to a dunk by Punter with 39 seconds left. Down five, the Bucs were unable to muster a comeback at that point.

Tennessee had four players in double figures, led by a team-high 17 points from Mostella and 14 from senior forward Armani Moore.

The Bucs will now enjoy an eight-day break for the holidays, and will return to action Wednesday, Dec. 30 at home against Morehead State. Tip at Freedom Hall is set for 7 p.m.