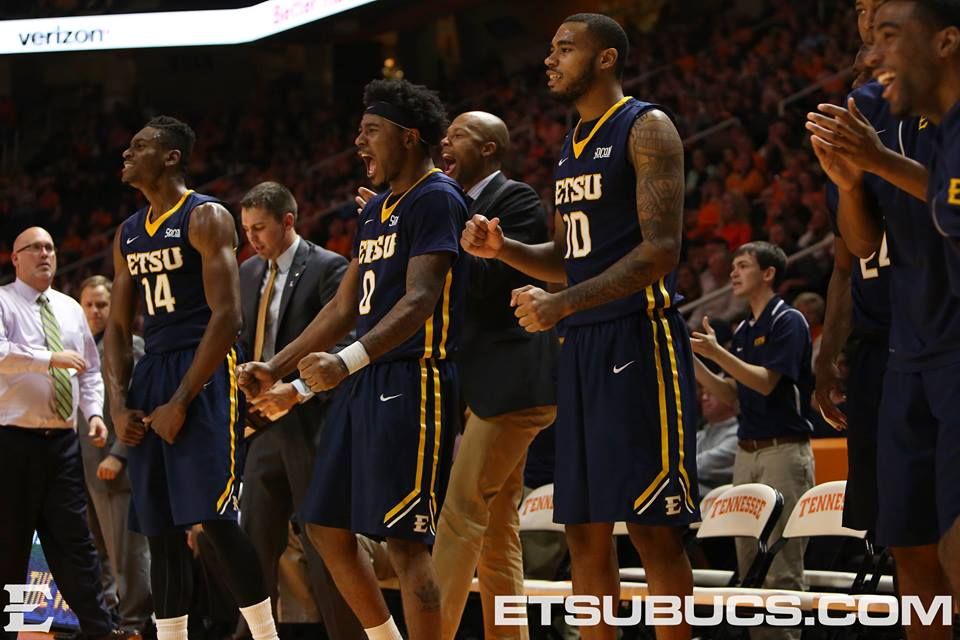 ETSU enters the game at 5-6 on the season with a 4-1 record in home games, while Morehead State – a former rival of the Bucs during their time in the Ohio Valley Conference back in the 1960s and 1970s – will bring a 6-5 mark into the contest. The two teams have one common opponent on the season, with the Bucs beating Green Bay at home 103-90 back on Nov. 17, while Morehead State dropped a home contest to the same team 78-72 on Monday night.

This will be the last non-conference home game for the Bucs before beginning Southern Conference play on the road Saturday at Western Carolina.

JOHNSON CITY, Tenn. (Dec. 22, 2015) – For 36 minutes, the ETSU men’s basketball team put itself in position to enjoy a holiday victory over the Tennessee Volunteers. Unfortunately for the Buccaneers, the final four minutes of the game did not go as planned. ... Leading the Vols 65-61 with 4:35 left in regulation, the Bucs looked on as Tennessee closed the game with a 15-2 offensive run to take a 76-67 win over ETSU Tuesday evening inside Thompson-Boling Arena. ... The Bucs got a game-high 22 points from senior guard Ge’Lawn Guyn (Lexington, Ky.), while junior guard A.J. Merriweather (Jackson) pitched in 11. In addition, senior forward Lester Wilson (Knoxville) had his best game of the year so far with nine points and five rebounds in just nine minutes of action. ... Early in the game, Guyn provided the Bucs with their offense, scoring the Bucs’ first 11 points of the contest and helping ETSU stay close at 14-11 with 14 minutes left before the break. ... The Bucs kept the deficit in single digits the rest of the first half, but still trailed 42-33 at the break. However, before leaving the floor, Forbes was called for a technical foul following a brief conversation with an official. That technical would provide inspiration for the Bucs in the second half. ... After Tennessee made one of two free throws on the technical foul, the Bucs found a renewed energy and opened the second half by outscoring the Vols 14-4 to take the lead 47-46 on a thunderous dunk by Deuce Bello (Greensboro, N.C.) with 14 minutes to go in the game. ... Both teams went back-and-forth from there, but with four minutes left back-to-back jumpers by T.J. Cromer (Albany, Ga.) lifted the Bucs to a 65-61 lead. From there, the Vols regained the advantage with a 6-0 run, but a layup by Bello made it 67-67 with two minutes remaining. After trading possessions, UT had the ball with 1:11 left and got guard Detrick Mostella open for a made 3-pointer on the right wing.

Down 70-67, the Bucs designed a play to try and tie the game with a 3-pointer, but a turnover by Guyn led to a dunk by Punter with 39 seconds left. Down five, the Bucs were unable to muster a comeback at that point.

The series vs. Morehead State

The Bucs and Eagles have met 53 times, with most of those games being played during ETSU’s time in the OVC ... The Eagles leads the series 28-25 but the Bucs won the last meeting 63-59 last season in Morehead, Ky.

Last time out against Morehead State

MOREHEAD, Ky. (Dec. 1, 2014) – Despite losing its starting point guard to an injury early in the game, having its back-up point guard in foul trouble throughout the second half, and shooting just 35.7 percent from the field for the game, the ETSU men’s basketball team still found a way to drop Morehead State 63-59 inside Johnson Arena. ... The Buccaneers can thank junior forward Lester Wilson (Knoxville) and senior guard Jalen Riley (Racine, Wis.) for overcoming all those odds. Wilson made multiple defensive plays down the stretch and hit three straight 3-pointers over the final four minutes to finish with 18 points, while Riley scored a team-high 21 despite playing much of the second half with four fouls. ... Junior guard Petey McClain (Mobile, Ala.) departed the game early in the first half after apparently injuring his left ankle. But fortunately for the Bucs, it was a struggle for both teams offensively before the break. ... ETSU did not have a made field goal until a 3-pointer by Riley with 10:48 left before the intermission, but the Eagles were equally ineffective and allowed the Bucs to stay in the game. ... ETSU’s scoring attack finally found some rhythm midway through the half and managed a 7-0 run to take a 20-14 lead with 5:30 left before the break. However, Morehead State regained the advantage at 21-20 before the Bucs got a layup from sophomore guard Devin Harris (Tampa, Fla.) with 54 seconds left that made it 22-21 at halftime. ... After the break, the Bucs continued to have a hard time scoring the basketball and fell behind by four at 47-43, but after a pair of free throws from Riley, Wilson blocked a shot on one end of the floor and then sprinted to the other end to sink a corner 3-pointer that gave the Bucs a 48-47 lead with 3:20 left in the game. Wilson followed with two more long range bombs, including one that came with 42 seconds on the clock and made it 59-54 and the Bucs never looked back.

Senior guard Ge’Lawn Guyn’s game-winning shot at Georgia Tech (11/22) is just the most obvious indictation of the play and leadership he has displayed so far at ETSU ... Heading into the Morehead State matchup, Guyn leads the Bucs in scoring (18.4 ppg), blocks (0.9 bpg), and steals (1.2 spg), is tied for second in assists (2.2 apg), and tied for third in rebounding (3.8 rpg) ... The rebound and block numbers are most impressive considering Guyn plays primarily the point guard position.

When transfer junior guard T.J. Cromer (Albany, Ga.) joined the Buccaneers, he was touted as a scoring threat and a player that would provide some offensive bunch ... Cromer has lived up to that billing, and is currently second on the team with 14.3 points per game. ... In the Bucs’ win over Eastern Kentucky, Cromer showed a balanced offensive attack, setting or matching career highs for points (22), assists (5), rebounds (7) and free throws (8).

Already a 1,000-point scorer, senior forward Lester Wilson (Knoxville) has an opportunity to put his name in the ETSU basketball record books again this season as the most prolific 3-point shooter in school history ... Currently tied for fourth on the career list with 221 makes from beyond the arc, Wilson finds himself 55 makes behind the program leader Courtney Pigram (Memphis), who made 276 3-pointers during his career from 2005-09 ... Wilson has averaged 70 makes a year during his previous three seasons at ETSU, meaning if he can replicate his “average” this year he should have a shot to take the top spot. ... Unfortunately for Wilson, at this point of the season he is averaging just one 3-pointer a game.