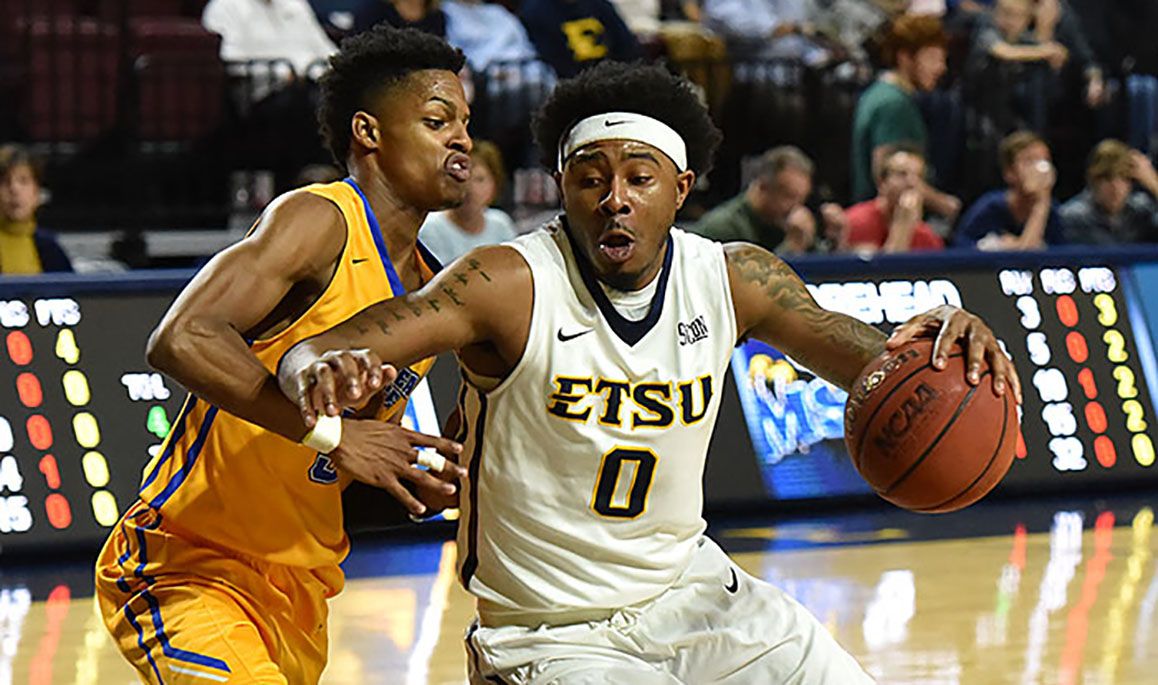 JOHNSON CITY, Tenn. (Dec. 30, 2015) – With senior point guard and leading scorer Ge’Lawn Guyn (Lexington, Ky.) nursing an injured calf muscle and sitting in street clothes on the bench, the ETSU men’s basketball team built a 22-point second half lead and ultimately held off a furious Morehead State rally in the closing minutes to post a 75-72 win over the Eagles Wednesday evening inside Freedom Hall.

The Buccaneers – who improve to 6-6 on the year – were led by junior guard T.J. Cromer (Albany, Ga.), who scored a game high and career best 25 points, while senior guard Deuce Bello (Greensboro, N.C.) came off the bench to net 12 points in the winning effort. Meanwhile, Morehead State dropped to 6-6 on the year and got a team high 20 points from Xavier Moon.

“I thought we came out with really good defensive intensity in the first half and we maintained a double-digit lead for most of the game,” said ETSU head coach Steve Forbes, whose team was playing its final home non-conference game of the year and will open its Southern Conference schedule at Western Carolina on Saturday at 2 p.m. “They just started making some shots at the end of the game and that made it closer than you like it to be. We never gave up the lead and got it done, so we’re ready to move on to conference play.”

ETSU fell behind by a score of 9-4 just four minutes into the game, but at that point the Bucs turned on the offensive jets with a 19-3 run that made it 23-12 with just under eight minutes left in the half. The lead grew to as many as 18 late in the first half, and at the break it was 39-21 in favor of the Bucs.

The defensive effort by ETSU was the key to its first-half success, as Morehead State shot just 28 percent from the floor and committed nine turnovers. ETSU outscored the Eagles 8-0 off those turnovers and held a 17-8 advantage in bench points.

After holding Morehead State to that low shooting percentage in the first 20 minutes, the Bucs watched the Eagles shoot an impressive 56 percent from the floor in the second half to help power their rally. After falling behind 56-34 with 12:58 left in regulation, the Eagles ultimately outscored ETSU 38-19 the rest of the way.

Morehead got to within five points at 70-65 with 23 seconds left, and later made it 72-68 with 17 seconds remaining, but ETSU connected on enough foul shots at the end to hold on. Morehead State’s Corban Collins ended the game with an uncontested 3-pointer at the buzzer to post the final score of 75-72.

The Bucs will return to action on the road in Cullowhee, N.C. on Saturday, as they open Southern Conference play against Western Carolina at 2 p.m.