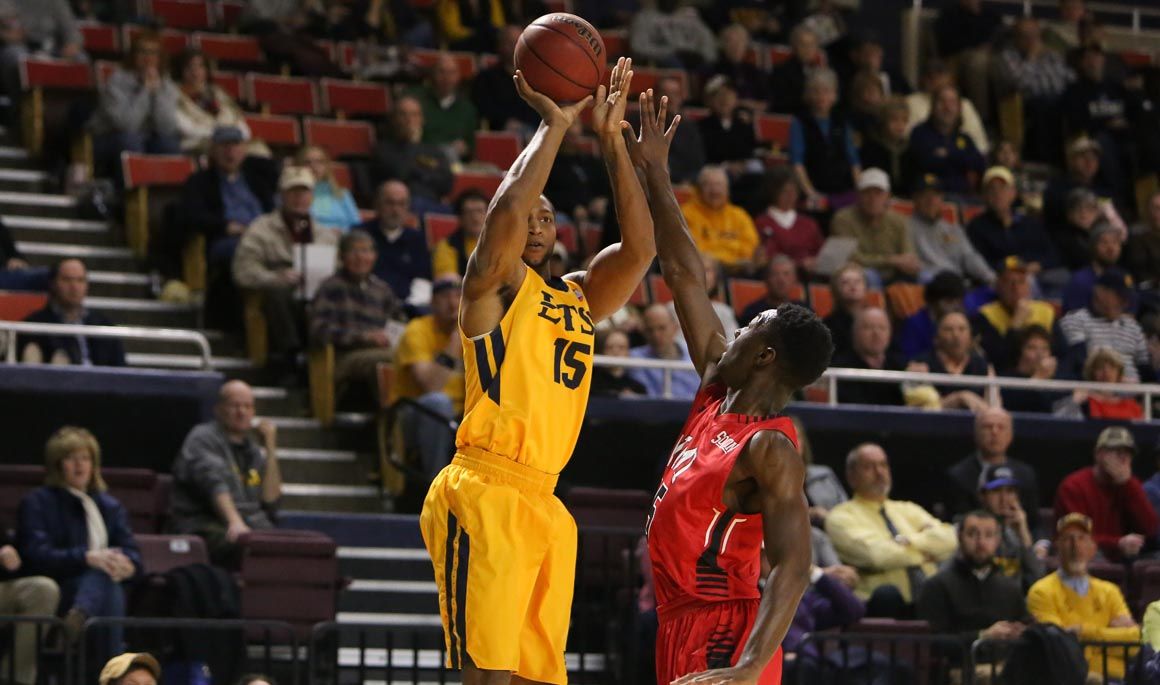 JOHNSON CITY, Tenn. (Jan. 11, 2016) – Connecting on a school record 15 3-pointers for the second straight game, the ETSU men’s basketball team raced out to a large lead in the first half and then rolled to a convincing 88-51 win over VMI in Southern Conference play Monday evening at Freedom Hall.

Junior guard T.J. Cromer led the way, tying the school record for single game 3-point shooting percentage by going 6-of-7 (86 percent) from beyond the arc and scoring a game high 23 points. Meanwhile, senior forward Lester Wilson (Knoxville) had 16 points on a 4-of-7 clip from 3-point range, while sophomore guard Desonta Bradford (Humboldt) added an 11-point effort.

As a team, the Bucs were 15-of-31 from 3-point range as they improved to 10-6 overall, 3-0 in SoCon play. With Wofford’s loss Monday night to Chattanooga, the Bucs are now in sole possession of first place in the league. Meanwhile, VMI dropped to 5-10, 0-4.

“I thought tonight we had a lot of energy after an emotional game on Saturday and really shot the ball well,” said ETSU head coach Steve Forbes, whose team has now won five games in a row. “Our guys moved the ball tonight and it says a lot about your team when you have 18 assists on 30 made shots. The guys are really starting to trust each other, care about each other and playing together. It was great to see.”

The Bucs dominated the game statistically, shooting 49 percent from the field and 48 percent from beyond the arc. They also out-rebounded the Keydets 46-26 and held VMI to 34 percent shooting from the floor.

In the first half, the Buccaneers wasted little time putting on an impressive shooting display, going 10-of-16 from 3-point range on their way to building a 47-22 halftime lead. Five different ETSU players hit from long range in the opening 20 minutes, led by three each from Wilson and Cromer.

After the break, VMI rallied momentarily and cut the ETSU lead to 16 at 48-32. However, at that point the Bucs started working the ball inside to Isaac Banks (New Orleans, La.), who scored seven of ETSU’s next 12 points as the lead increased to 60-35. From there, the Bucs continued to build their advantage and ultimately tied the school record for threes when guard Stetson Moore connected from outside with less than a minute remaining.

For VMI, Julian Eleby was the lone player in double figures with 10 points.

The Bucs will now hit the road for a pair of Southern Conference games later this week, beginning with a matchup at Samford University in Birmingham, Ala., on Thursday night. Tip for that matchup with the Bulldogs is 8 p.m. (EST). For more on ETSU men’s basketball throughout the 2015-16 season, visit ETSUBucs.com and click on the men’s hoops link.