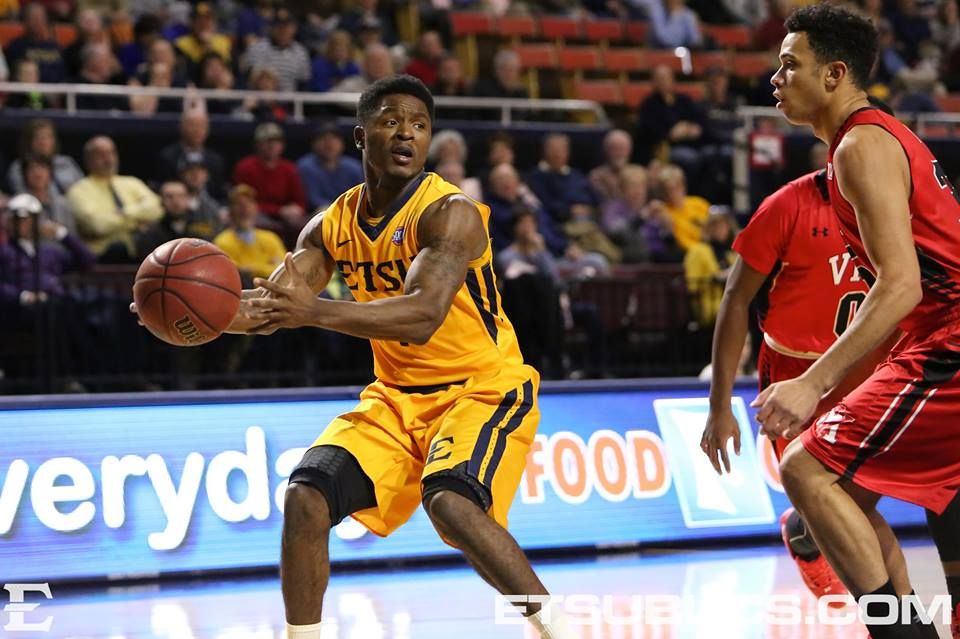 Despite the loss, senior Petey McClain and the rest of the Buccaneers are still tied for first place in the loss column of the Southern Conference standings.
McLean’s career high 29 lifts UTC past ETSU, 94-84
ETSU at Chattanooga | January 16, 2016
Related Links

CHATTANOOGA, Tenn. (Jan. 16, 2016) – Chattanooga’s Tre’ McLean scored a career high 29 points and the Mocs opened the second half with a decisive offensive run to take a 94-84 win over the ETSU men’s basketball team in a matchup of Southern Conference rivals Saturday evening inside McKenzie Arena.

With the loss, ETSU drops to 11-7 overall, 4-1 in SoCon play, but remains tied for first place in the loss column of the league standings. Meanwhile, the Mocs improved to 16-3, 5-1.

Chattanooga was powered by a 54 percent shooting percentage from the field, a 55 percent clip from 3-point range, and an 81 percent effort from the foul line. While the Bucs out-rebounded the Mocs 34-32 and committed just 11 turnovers for the game, ETSU head coach Steve Forbes said Chattanooga’s shooting numbers were just too much to overcome.

“Give credit to Chattanooga, they played well tonight,” said Forbes, whose team saw its six-game winning streak snapped. “When a team shoots it that well you aren’t going to win those games. I thought we fought the whole way, but we struggled with their 1-3-1 zone in the second half, and I think that was a big key to the game. We need to handle that better.”

The first half was an entertaining scoring fest for both sides. While the Bucs initially started out slowly and fell behind 24-14, they used a 20-6 run midway through the half to take a 34-30 advantage with five minutes left before the break. UTC recovered at that point, regaining the advantage at 45-43 by the intermission.

Even though Chattanooga led the game at that point, the Bucs had shot 55 percent from the floor in the first half and a trio of dunks by Bello left the pro-UTC crowd stunned. In addition, the Bucs held an 18-12 advantage in rebounding, but did commit eight critical turnovers in the opening 20 minutes that led to easy scores by UTC.

Unfortunately for the Bucs, UTC came out on fire in the second half, opening with an 11-0 offensive run to build a 13-point lead at 56-43 with 15 minutes left in the game. While ETSU attempted to cut into the lead and got to within eight points at 81-73 with four minutes left in regulation, the Bucs were unable to get any closer the rest of the way.

The Bucs will now return home for a pair of games at Freedom Hall, hosting Mercer at 7 p.m. on Thursday, Jan. 21, followed by a visit from The Citadel on Saturday, Jan. 23. For more on ETSU men’s basketball throughout the 2015-16 season, visit ETSUBucs.com and click on the men’s hoops link.