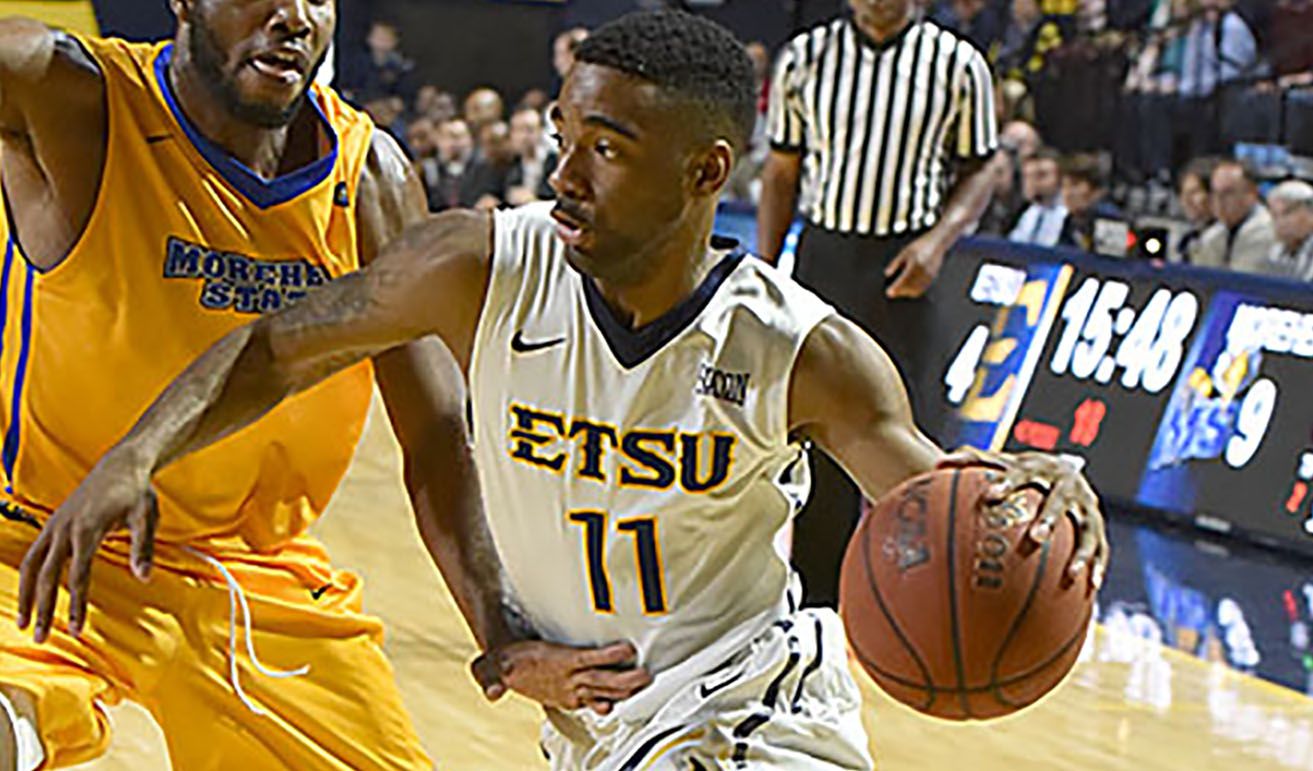 SPARTANBURG, S.C. (Jan. 28, 2016) – With a defensive effort that held the ETSU men’s basketball team to a season low three 3-pointers and using a 28-7 offensive run to close out the first half, the Wofford Terriers dropped the Buccaneers 87-73 Thursday evening inside Benjamin Johnson Arena.

“We just didn’t play well,” said ETSU head coach Steve Forbes. “They hurt us on the offensive boards in the first half and just outplayed us most of the night. I was happy that we kept fighting at the end, but to win on the road we have to play much better than that.”

The Bucs did play well in the early going, building a 21-16 advantage over the first 12 minutes of game play. However, at that point, the game seemed to turn after ETSU failed to grab a defensive rebound and Wofford’s Jaylen Allen was fouled after making a 3-point shot. While Allen missed the free throw, the ball was rebounded once again by Wofford’s Ryan Sawvell, who then scored to give the Terriers a five-point swing on one possession, making it 21-21.

The Terriers used that sequence to launch what would become a 28-7 run over the final eight minutes of the half and ended with Wofford leading 44-28 at the break.

After the intermission, the Bucs scored seven straight points and cut the lead to 12 at 47-35, but ETSU’s defensive effort was still lacking as the Terriers answered with its own offensive run and ultimately moved back ahead by as many as 21 at 70-49 with 8:15 left in regulation.

ETSU battled back with a full-court press defense and got to within 11 at 81-70 with 1:56 left, but that would be as close as the Bucs could get to the Terriers.

A bright spot for ETSU was the play of sophomore guard Desonta Bradford (Humboldt), who finished with a career high 17 points on 7-of-9 shooting from the floor. Meanwhile, senior guard Ge’Lawn Guyn (Lexington, Ky.) finished with a team-high 18 points, while both seniors Lester Wilson (Knoxville) and Petey McClain (Mobile, Ala.) had 10 points apiece.

ETSU will be back on the road Saturday when they face SoCon foe Furman at 4 p.m. in Greenville, S.C. For more on ETSU men’s basketball throughout the 2015-16 season, visit ETSUBucs.com.