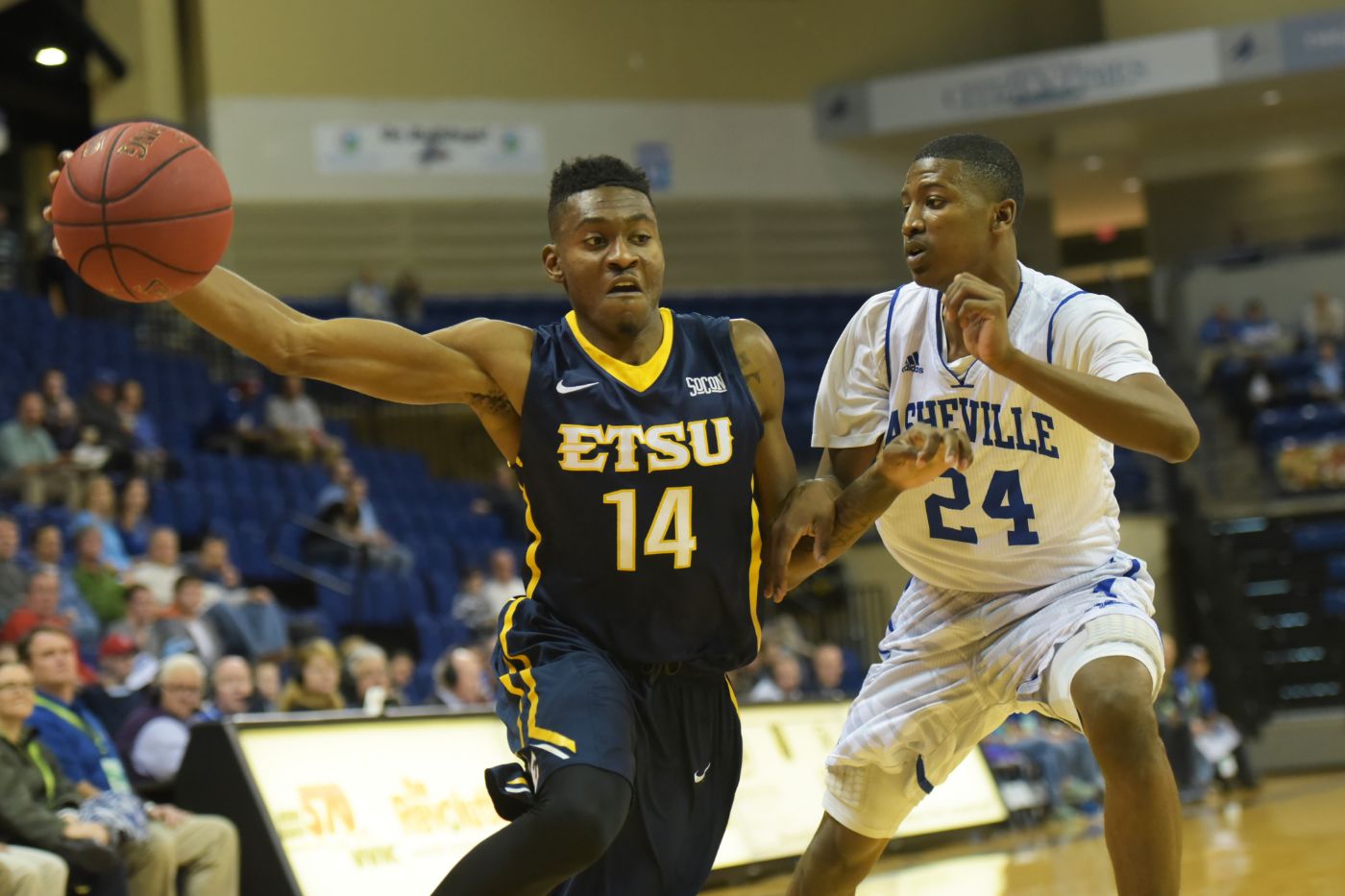 The ETSU men’s basketball team’s senior guard – who grew up in Greensboro, N.C. – scored 10 of the Buccaneers’ final 15 points, helping power a game-defining 15-3 run to close out the contest and give ETSU a remarkable 68-65 comeback win over Southern Conference foe UNC Greensboro Saturday afternoon inside Fleming Gym.

The Bucs, who trailed by nine points at 62-53 with 3:36 left in regulation, went to their full-court, pressure defense in the final minutes to secure the win and move to 15-9 overall, 8-3 in SoCon play. Meanwhile, UNC Greensboro dropped to 9-15, 5-6.

During the final ETSU surge, Bello’s order of scoring plays included a made 3-pointer, a dunk, another made 3-pointer, and another dunk off a miss by fellow senior guard Ge’Lawn Guyn (Lexington, Ky.) that made it 68-65. On the possession prior to Bello’s final dunk, Guyn had given the Bucs the lead thanks to a traditional and-one play as he hit a layup, was fouled, and then sank a foul shot to make it 66-65.

“What an unbelievable homecoming for Deuce,” said ETSU head coach Steve Forbes. “All of us on the coaching staff told him after the game that we’ve coached full-court pressure for a long time and he’s as good as any player I’ve ever coached at it. He’s unbelievable.

Unlike the first half of Thursday’s game at VMI, the Bucs did not get off to a slow start offensively in this matchup. Opening the game with 3-pointers from Guyn and Cromer, the Bucs also used a 13-2 offensive run midway through the half to open a 10-point lead at 21-11.

While the Bucs shot 52 percent from the field and 63 percent from 3-point range, out-rebounded the Spartans 17-13, and led for much of the opening 20 minutes, UNCG did get back-to-back 3-pointers from Demetrius Troy in the closing minute of the half to cut the Bucs’ advantage to just 33-30 at the intermission.

In the second half, the Bucs moved ahead by seven at 39-32, but at that point UNCG went on a 19-3 run to take a 51-42 lead with just over 11 minutes left in regulation. The Bucs could not cut into the Spartans’ lead until going to the press defense in the final 3:36.

For the Spartans, Francis Alfonso matched Bello with 16 points, while and Kayel Locke finished with 14 and 13 points, respectively.

After going 2-2 on this four-game road swing through the SoCon, the Bucs will finally return home for the first time in nearly three weeks when they host Samford at Freedom Hall on Thursday, Feb. 11. Tip for that matchup with the Bulldogs is set for 7 p.m., and will be the first of three straight at home for the Bucs. For more on ETSU men’s basketball throughout the 2015-16 season, visit ETSUBucs.com and click on the men’s hoops link.