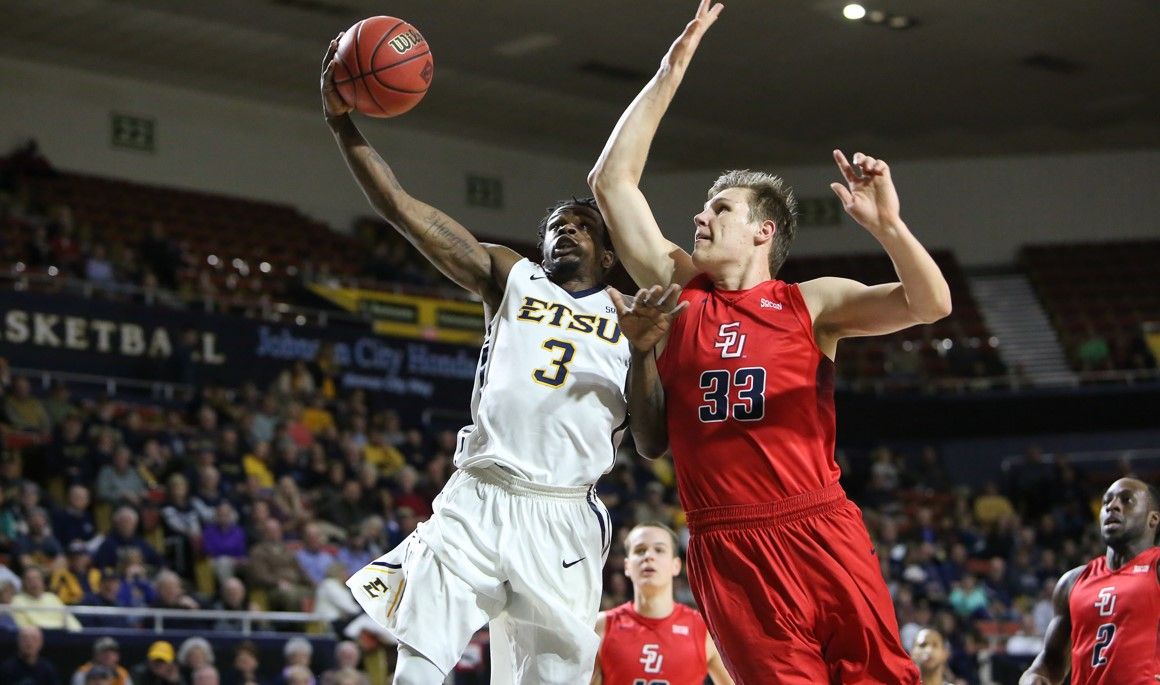 Win over Bulldogs, Chattanooga loss to Western Carolina sets up battle for first place with Mocs Saturday at Freedom Hall

Despite watching Samford’s freshman post Wyatt Walker score a career high 30 points and basically take over the game in the second half, the Buccaneers overcame that individual performance by placing four of their own players in double figures, led by a team high 25 points from senior guard Ge’Lawn Guyn (Lexington, Ky.). Guyn finished the game with nine of the Bucs final 11 points in overtime and hit four straight free throws in the waning seconds to ice the win.

Combined with Chattanooga’s loss to Western Carolina later in the evening, the Bucs – who improved to 16-9 overall, 9-3 in SoCon play – will be playing for a share of first place in the league standings when the Mocs visit Freedom Hall at 4 p.m. on Saturday. Meanwhile, Samford dropped to 12-15 overall, 3-11 in league play.

“Give Samford credit because they didn’t go away,” said ETSU head coach Steve Forbes, whose team has now won three straight overtime games at home. “I thought we played a nice first half with 10 assists on 16 made shots and we were leading by 11. But we aren’t good enough to just show up and expect to win, and that’s what we did in the second half. To our guys’ credit, we made plays down the stretch and got the win, and now we have the opportunity to play a meaningful game here at home. We know this game means a lot to our fans.”

Along with Guyn, the Bucs got 17 points from junior guard T.J. Cromer (Albany, Ga.), 12 from junior post Isaac Banks (New Orleans, La.) and 10 from sophomore guard Desonta Bradford (Humboldt). For the Bulldogs, Walker was joined in double figures by teammate Christen Cunningham with 26 points and Matt Rose with 10.

In the first half, the Bucs offense was clicking – especially from beyond the 3-point line. Shooting 62 percent from outside the arc (8-of-13) and 52 percent from the field (16-of-31), ETSU methodically built an 11-point lead of 44-33 by the intermission.

The second half got off to a nightmarish start for the Bucs, as Walker scored 11 points to power a 19-6 offensive run and give the Bulldogs a 52-51 lead with 13 minutes left in regulation. Samford still led by one at 54-53 with 12:37 left in the game when ETSU responded to the threat with a 16-5 run of its own over the next five minutes of game play to make it 69-59.

Samford did not go away and battled back to tie the game at 79 with another score from Walker with 48 seconds left in regulation. The Bucs then came up empty on an offensive possession and Samford had a final opportunity to win at the buzzer, but Cromer managed to swoop in behind Walker to steal a pass and force OT.

In overtime, both teams traded a pair of baskets before a 3-pointer and two free throws from Guyn made it 88-83 in favor of ETSU. Samford still kept the game within two points from there, but Guyn made four straight at the line to keep the Bucs ahead.

ETSU finished the game shooting 50 percent from the field and 55 percent (11-of-20) from the 3-point line. At the foul line, the Bucs were equally good, hitting 76 percent of their shots (19-of-25) at the charity stripe compared to a 68.3 percent mark for the Bulldogs.

The Bucs will continue with their “Rivalry Week” trio of home games when they host Chattanooga on Saturday at 4 p.m. inside Freedom Hall. Ticket demand for this game between the first-place Mocs and second-place Bucs has been high, and fans are encouraged to purchase their seats in advance by visiting ETSUBucs.com or contacting the ETSU ticket office by phone at 423-439-ETSU (3878).