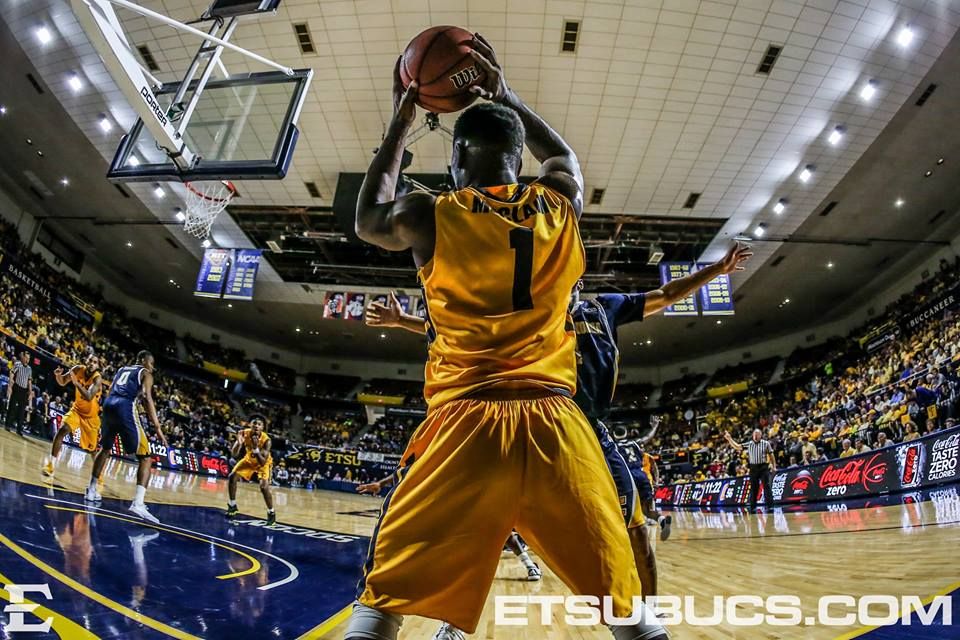 JOHNSON CITY, Tenn. (Feb. 14, 2016) – After losing a rivalry matchup with Chattanooga on Saturday afternoon, the ETSU men’s basketball team faces the challenge of needing to refocus and regroup quickly to stay in the conference race as Western Carolina visits Freedom Hall on Monday night.

Tip for the Buccaneers and Catamounts is set for 7 p.m., and the game will be aired by the American Sports Network, which will broadcast the game on several affiliated televisions across the country, as well as via live web streaming at the americansportsnet.com site.

In addition to the American Sports Network broadcast, the Buccaneers Sports Network will have the live radio feed on its affiliated stations, and ETSUBucs.com will also carry the live audio feed of the contest. Across the region, the Bucs’ flagship radio station is AM 640 WXSM, and the game can also be heard on FM 104.9 NASH Icon.

This matchup with Western Carolina will wrap up the Bucs current three-game, “Rivalry Week” home stand. ETSU defeated the Catamounts earlier this season 82-66 in Cullowhee, N.C.

JOHNSON CITY, Tenn. (Feb. 13, 2016) – Playing in front of the largest crowd for a Southern Conference game this season, the ETSU men’s basketball team was unable to rally in the final minutes and fell 76-68 to rival Chattanooga inside Freedom Hall. ... A crowd of 5,601 fans looked on as the Buccaneers dropped to 16-10 overall, 9-4 in SoCon play, while the Mocs improved to 23-4, 12-2. ... Chattanooga built a lead of as many as 16 points at 59-43 with 10:57 left in the game, but to the Bucs’ credit, they rallied to pull to within seven at 69-61 with 1:58 left on the clock. However, throughout that rally ETSU had several plays not go their way or bounces deflected to the advantage of the Mocs. In the end, it was too much to overcome. ... For the game, the Bucs were led by a team-high 24 points from senior guard Ge’Lawn Guyn (Lexington, Ky.), while junior post Isaac Banks (New Orleans, La.) finished with 14. For the Mocs, Tre’ McLean had a game-high 25 points, while teammates Greg Pryor and Dee Oldham had 10 points apiece. ... In the first half, both teams traded baskets early on and the Bucs maintained a small lead at 19-17 with just over eight minutes left before the break. Unfortunately for ETSU, the Mocs went on a 9-0 run over the next three minutes of play and then closed the half on another 11-3 spurt to make it 37-26 UTC at the break. ... After the break, the Mocs held the advantage throughout and kept ETSU at bay. For the game, the Mocs enjoyed a 37-30 advantage on the glass and shot 81 percent from the foul line (25-of-31), holding a significant advantage on the Bucs at the charity stripe, as ETSU shot just 63 percent from the line and went only 12-of-19 for the contest.

The series vs. Western Carolina

ETSU leads the all-time series 49-24 and had won 17 straight matchups with the Catamounts before losing to Western Carolina 67-61 in the first round of the 2015 SoCon Tournament. ... The Bucs avenged that loss with an 82-66 win over the Catamounts in Cullowhee, N.C. earlier this year.

Last time out against Western Carolina

CULLOWHEE, N.C. (Jan. 2, 2016) – The ETSU men’s basketball team opened its 2016 Southern Conference schedule in style, putting together one of its most complete efforts of the season in an 82-66 road win over Western Carolina at the Ramsey Center. ... Offensively, the Buccaneers (7-6 overall, 1-0 in SoCon play) built a 21-point first-half lead and finished the game shooting 53 percent from both the field and 3-point range. Defensively, ETSU held the Catamounts (5-9, 0-1) to 32 percent shooting from the field and just 11 percent from beyond the arc. The Bucs also posted a season-high 19 assists. ... The Bucs got a team-high 16 points from junior guard T.J. Cromer (Albany, Ga.), while senior guards Deuce Bello (Greensboro, N.C.) and Ge’Lawn Guyn (Lexington, Ky.) pitched in 15 and 10 points, respectively. On the inside, junior forward Isaac Banks (New Orleans, La.) had a strong game with 10 points and a team-high seven rebounds. ... The first half script played out perfectly for the Bucs. With a balanced inside-outside offensive attack and a lockdown defensive effort, ETSU shot 63 percent from the floor and forced the Catamounts into nine turnovers, racing out to a quick double-digit lead in the opening minutes of the game.’ ... The Bucs’ advantage ultimately grew to as many as 21 points at 41-19 before Western tried to respond with a 10-3 run in the waning minutes of the half, cutting the ETSU lead to 15 at 44-29. However, by the end of the half, the Bucs still led by 16 at 48-32. ... In the first 20 minutes, the Bucs got a team-high 10 points and four rebounds from Banks, while Cromer and senior forward Lester Wilson (Knoxville) each had eight in the opening half. ... After the intermission, ETSU increased its lead to 19 at 53-34, but Western Carolina rallied to put together a quick 11-2 burst and make it 55-45 with 12 minutes left in regulation. ETSU weathered rally well, and ultimately ended the game with the same 16-point advantage it held at halftime.

SoCon POTW Ge’Lawn Guyn doing it all for Bucs

The SoCon player of the week for Jan. 19-25, senior guard Ge’Lawn Guyn’s game-winning shots at Georgia Tech (11/22) and at home in the Bucs’ win over Mercer (1/21) are just two of the most obvious indictations of the play and leadership he has displayed so far at ETSU ... Heading into the UTC matchup, Guyn leads the Bucs in scoring (17.9 ppg), blocks (0.8 bpg) and steals (1.2), and is third on the team in rebounding (4.0 rpg), and assists (1.8 apg) ... In the Bucs’ wins over UNC Greensboro (twice), Mercer and The Citadel, Guyn made several clutch shots, including game-saving baskets in regulation and game-winning scores in overtime.

When transfer junior guard T.J. Cromer (Albany, Ga.) joined the Buccaneers, he was touted as a scoring threat and a player that would provide some offensive bunch ... He has lived up to that billing, and is currently second on the team with 15.4 points per game and is leading the team with 3.0 assists per contest ... Recently, Cromer hit the game-winning shot against UNC Greensboro (1/9), scoring 20 points and dishing out a career high six assists ... He then followed up that performance with a game-high 23 points and tied the school record for 3-point field goal percentage in a game with a 6-of-7 effort (.875) from outside the arc in the win over VMI (1/11).

Dishing out the assists

As the Bucs adjust and learn the new offensive system of first-year head coach Steve Forbes, the “buy-in” is starting to show up on the stat sheets ... In an eight-game stretch from 12/30 to 1/21, the Bucs enjoyed an efficient offensive approach, dishing out a total of 114 assists, for an average of 14.2 assists per game during that time. ... Prior to those eight outings, ETSU had averaged just over 12 assists per game. ... The team dished out a season-high 19 assists against Western, followed by 16 against N.C. Central, and 18 each in wins over UNCG and VMI.

It was a slow start to the year for senior forward Lester Wilson (Knoxville), but fortune has taken a turn for the veteran player in recent games ... Scoring 92 points in his last 12 games, Wilson is averaging just under 9.0 points per contest and has hit 27 3-pointers in that span, regaining an opportunity to become the program’s leader in 3-point baskets ... With a total of 253 makes from Wilson finds himself 23 makes behind the program leader Courtney Pigram (Memphis), who had 276 3-pointers during his career from 2005-09 ... Wilson has averaged 70 makes a year during his previous three seasons at ETSU, but was averaging just 1.0 3-pointer a game prior to his last eight outings ... Now, his average has moved up to 1.7 a game

Powering up in the Paint

Rebounding concerns weighed on the Buccaneers earlier this season, but in recent games the Bucs have appeared to make significant strides on the glass ... In particular, ETSU dominated the paint in the 88-51 win over VMI, outrebounding the Keydets 46-26 ... In that game, the Bucs held a 33-21 on the defensive glass and a 13-5 advantage on the offensive boards ... In the Bucs’ 16 wins this season, the team holds an overall +4.4 rebound advantage, compared to a -7.6 margin in their nine losses.

It is a new day for the ETSU men’s basketball program, as the Buccaneers welcome first-year head coach Steve Forbes and his assistant coaching staff to the program for the 2015-16 season ... Forbes, a highly successful assistant coach at the Division I level at programs such as Tennessee, Wichita State and Texas A&M, wasted no time revamping the ETSU roster, as the program’s lineup has not seen this much restructuring since the start of the 1997 season ... Returning just six players from last season’s squad, Forbes and company have utilized their vast recruiting ties to bring in 10 new players to the program … This group of 10 will include four transfers from Division I programs, along with four junior college transfers and two incoming high school prospects.

While Merriweather, McClain, Wilson and Bradford return in the backcourt, the Bucs have also added a wealth of talent at those positions with the addition of a pair of Division I senior transfers Ge’Lawn Guyn (Lexington, Ky.) from Cincinnati and Deuce Bello (Greensboro, N.C.) from Missouri … Both Guyn and Bello completed their degrees at their previous schools, meaning both are eligible to compete immediately at ETSU, and both are expected to play extensive minutes this season … In addition, junior college transfer T.J. Cromer (Albany, Ga.) joins the Bucs after a successful career as a point producer at Columbia State, and true freshman Shemar Johnson (Columbus, Miss.) brings exceptional height to the wing position at 6-foot-6 … In the frontcourt, Banks is the lone returning player but is joined by 7-foot center Peter Jurkin (Juba, South Sudan), who sat out last season with ETSU after transferring from Indiana … Along with those two, the Bucs have also added help for the inside game this season by signing junior college transfers Nigel Holley (Wilmington, N.C.) and Abednego “Benny” Lufile (Burlington, Ontario, Canada), as well as true freshman post Toriano Stokes (Memphis, Tenn.) … The Bucs have also added Indiana transfer Hanner Mosquera-Perea (Istmina, Colombia) and Wichita State transfer Tevin Glass (Greensboro, N.C.) who will miss this season due to NCAA transfer rules.