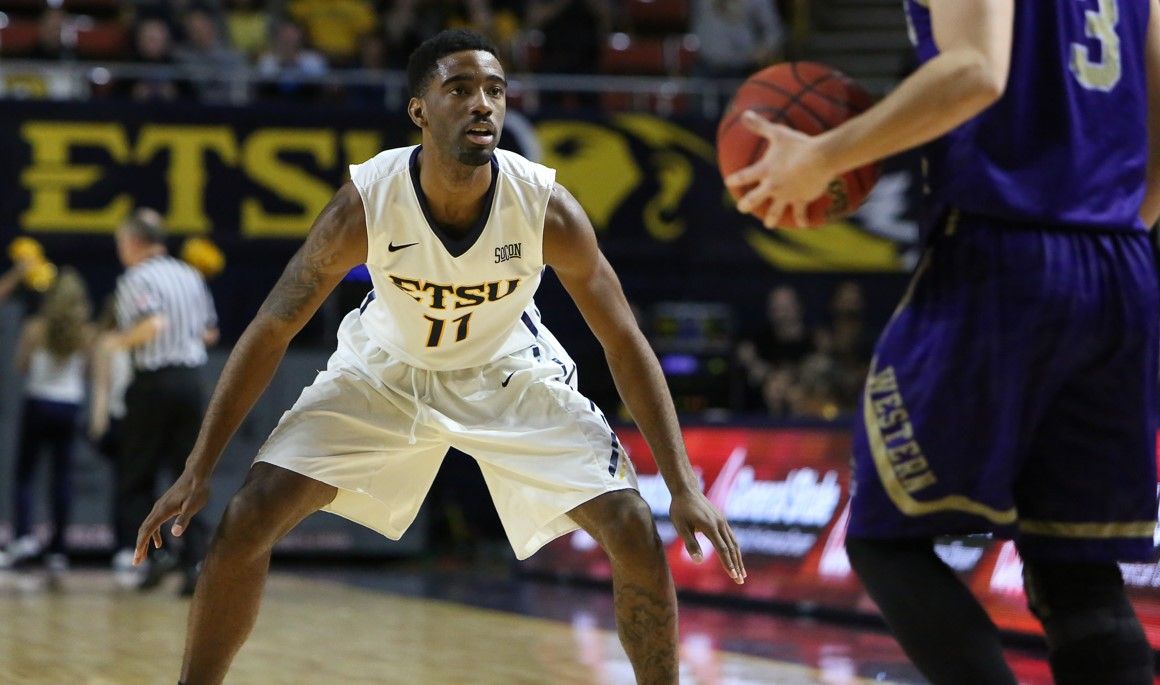 Sophomore guard Desonta Bradford scored a career high 18 points -- including 15 during one critical stretch in the second half -- to help power ETSU to the win.
New trio lifts Bucs past Western Carolina, 83-77
Western Carolina at ETSU | February 15, 2016
Related Links

JOHNSON CITY, Tenn. (Feb. 15, 2016) – The usual suspects gave way to a trio of breakout performances on Monday night, as the ETSU men’s basketball team overtook Western Carolina in the second half and dropped the Catamounts 83-77 in Southern Conference action at Freedom Hall.

Bradford’s night was particularly impressive, as he scored 15 of the Bucs’ 23 points during one stretch in the second half, helping ETSU overcome the Catamounts’ 48-42 lead and turn the score into a 65-59 game in favor of the Bucs. With the loss, WCU dropped to 11-16 overall, 6-8 in league play.

“I thought we had some great individual efforts from guys like Deuce Bello, Desonta Bradford and Peter Jurkin tonight,” said ETSU head coach Steve Forbes. “Deuce played with great energy, defended, rebounded and scored, and Desonta broke the game open in the second half with his effort. We’ve talked a lot about how good Desonta could be and I think we saw a glimpse of that today. This was a scary game for us coming off the emotions of Saturday and the Chattanooga game, so getting this one was big.”

Along with Bello, Bradford and Jurkin, the Bucs also got 14 points from senior guard Ge’Lawn Guyn (Lexington, Ky.), while junior guard T.J. Cromer (Albany, Ga.) added 11. The Bucs out-rebounded the Catamounts 34-24 and shot 55 percent from the field and 42 percent from 3-point range for the game.

For Western Carolina, Mike Brown finished with a team high 18 points, while Torrion Brummitt had 17 and Justin Browning added 14.

The Bucs led for much of the first 20 minutes of play, but Western Carolina closed the half on a 14-4 run to take the lead at 38-35 by the break. Unfortunately for the Bucs, the half ended when the Catamounts’ Browning sank a three-quarter court shot with 1.1 seconds left that was little more than an desperation heave, giving WCU the three-point advantage at the intermission.

In the second half, the Western Carolina lead grew to as many as eight points at 52-44 before the Bucs rallied to grab a 74-63 advantage with 2:18 left on a 3-pointer by Guyn. However, WCU did manage to cut the lead back to four points late in the game, but the Bucs hit enough foul shots to ice the win.

After going 2-1 during their three-game Rivalry Week home stand, the Bucs will now hit the road for two games this weekend beginning Thursday night at 6 p.m. against The Citadel in Charleston, S.C. ETSU will then head to Macon, Ga., to face Mercer on Saturday at 4:30 p.m. For more on ETSU men’s basketball throughout the 2015-16 season, visit ETSUBucs.com and click on the men’s hoops link.