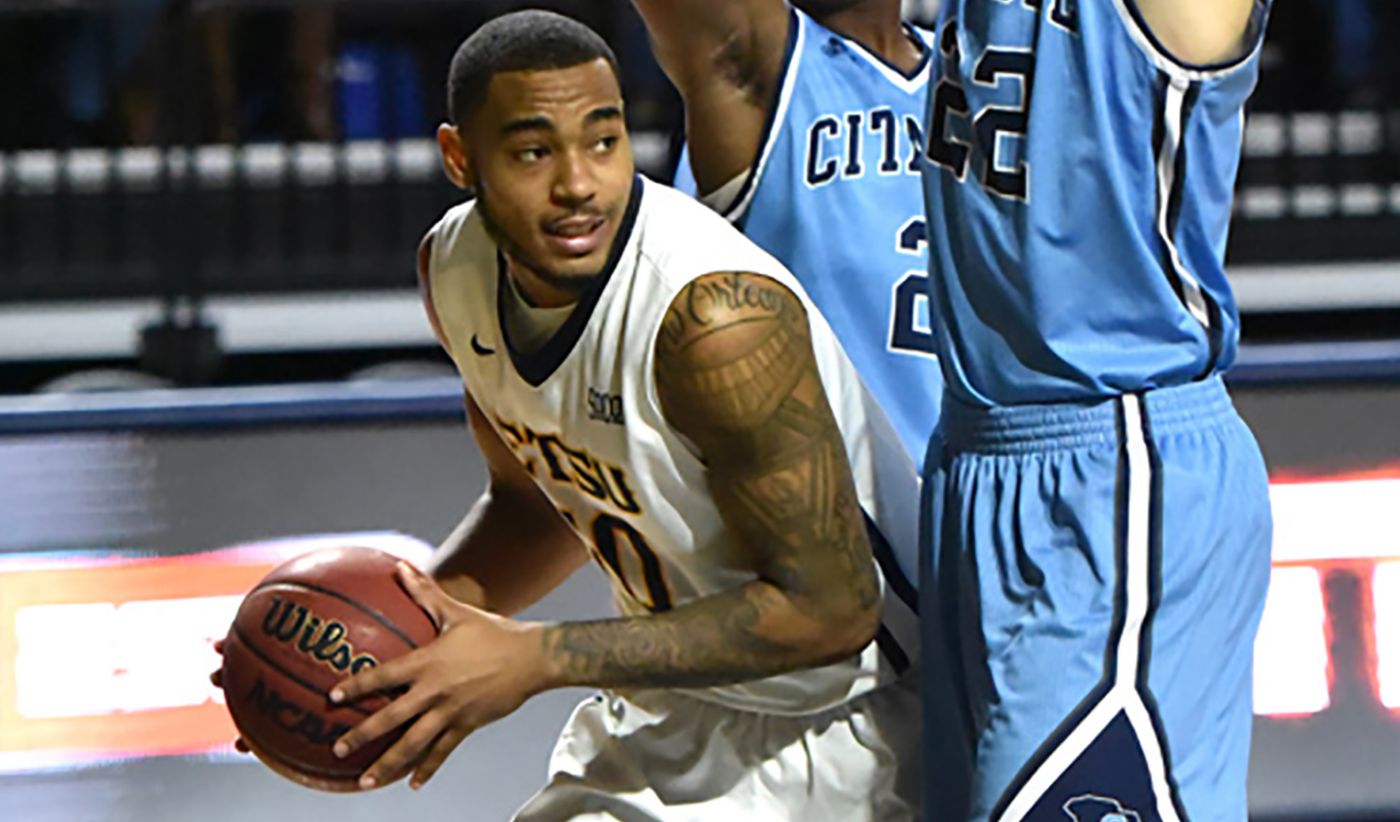 Junior post Isaac Banks posted a career high 18 rebounds and 10 points in the win over The Citadel
Defensive effort lifts Bucs past The Citadel, 67-51
ETSU at The Citadel | February 18, 2016
Related Links

CHARLESTON, S.C. (Feb. 18, 2016) – With the top two scoring teams in the Southern Conference facing off Thursday night at McAlister Fieldhouse, one may have expected a shootout. Instead, the ETSU men’s basketball team put together a defensive gem.

Holding The Citadel 20 points below its lowest point production of the season and 37 points below its scoring average – which leads the country at 88.1 points per game – the Buccaneers rolled to a defensively impressive 67-51 win over the Bulldogs.

“Well, we won a game defending and we changed some things up from the first time we played them,” said ETSU head coach Steve Forbes, whose team needed overtime to beat The Citadel 101-92 back in January. “We went over their screens and pressured their dribble handoffs, and I think that really effected their ability to get shots or turn the corner. And in defensive transition we were stellar tonight.”

The game ended with a truckload of lop-sided statistics for the Bucs, who out-rebounded the Bulldogs 58-36, held a 26-3 advantage in second chance points, and outscored The Citadel 28-14 in the paint. ETSU also held the Bulldogs to just 27.9 percent shooting from the floor and a 17 percent clip from 3-point range.

The Citadel was stymied by the Bucs’ defense early and often in the first half. ETSU held the Bulldogs to just 27 percent shooting from the floor and only 2-of-12 from 3-point range, outrebounding The Citadel 32-18 prior to the intermission. That defensive effort resulted in a solid half for the Bucs, who finished the first 20 minutes with a 33-23 lead on the Bulldogs’ home floor.

After the break, The Citadel showed some life offensively early in the second half, outscoring ETSU 9-2 to cut the Bucs’ lead to 37-34 with 16 minutes left in regulation. However, at that point the Bucs’ defense clamped down again, holding the Bulldogs scoreless over the next five minutes of game play and pulling back ahead by 11 at 46-35.

While The Citadel once again cut the Bucs’ lead to four at 52-48, Banks responded with four straight points and Cromer followed with five straight to power a 9-3 run for the Bucs and make it 59-48 with less than four minutes left in the game. ETSU was not threatened the rest of the way. For the Bulldogs, Quayson Williams and Derrick Henry were the only players to reach double figures with 11 points apiece.

The Bucs will now stay on the road to take on Mercer in Macon, Ga., on Saturday at 4:30 p.m. For more on ETSU men’s hoops, visit ETSUBucs.com and click on the men’s hoops link.