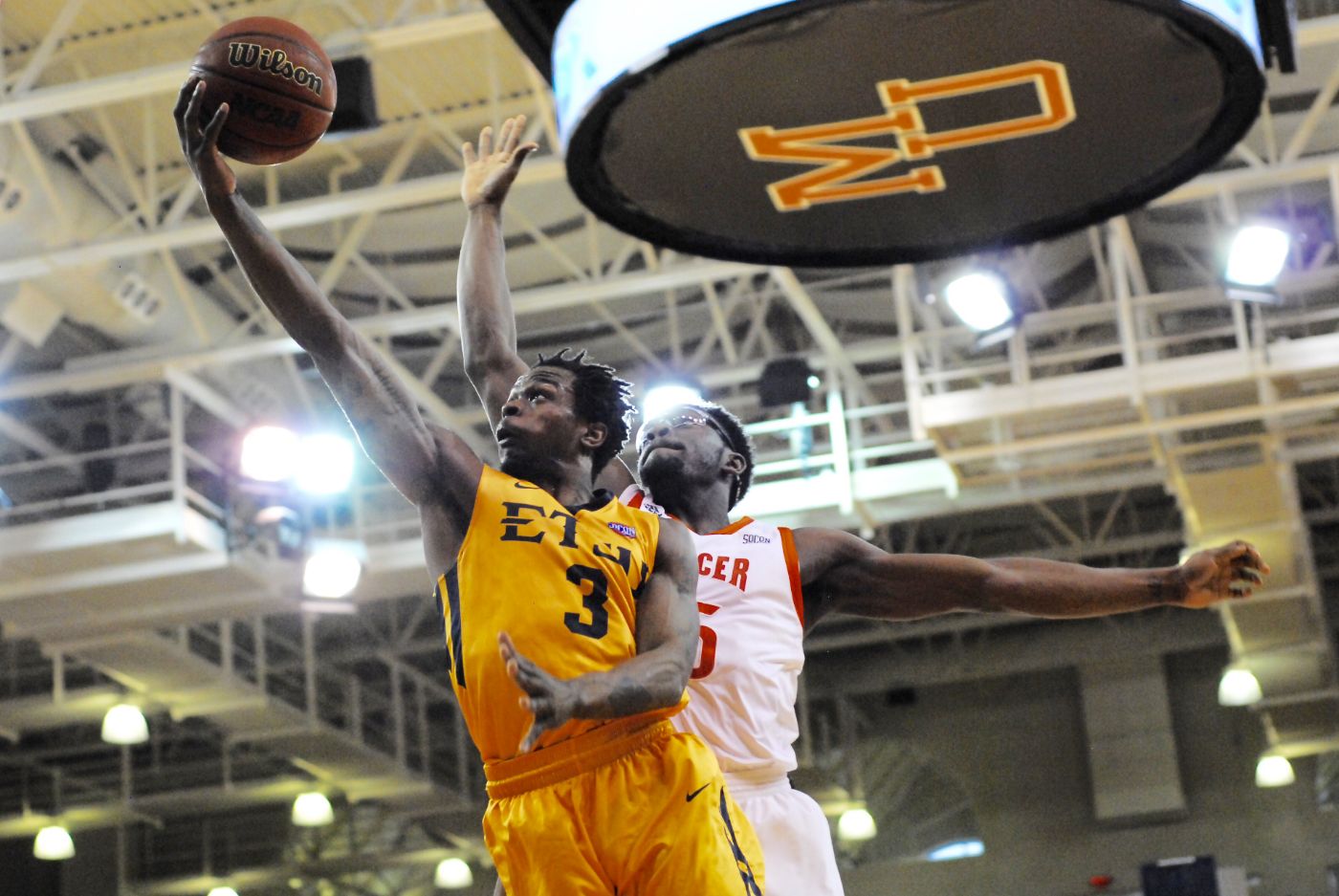 With the win, the Bucs enjoyed their first victory at Mercer and their first season sweep of the Bears since the 2010-11 season, while also improving to 19-10 overall and 12-4 in league play this year. Meanwhile, Mercer dropped to 18-11, 8-8.

The Bucs, who trailed by four at 70-65 with 3:16 left in the game, got nine straight points from Bradford in the final minutes, including a game-tying layup and go-ahead 3-pointer, and he also collected two blocks – both of which occurred on Mercer’s final two possessions. Meanwhile, Guyn’s 32 points came on a 7-of-11 shooting night from 3-point range.

“This is the best win we’ve had here since I’ve been the head coach at East Tennessee State,” said ETSU head coach Steve Forbes. “What a great effort by our team to come into a hostile environment, against a team with their backs to the wall, we stuck it out, kept with it and won the game. When you win a game like this you have to have individuals step up and both Ge’Lawn and Desonta did that today. They were unbelievable.”

It was a game of offensive runs in the first half, as ETSU opened up an early 11-4 lead thanks to three straight 3-pointers. From there, Mercer used several four- and five-points spurts, along with one 9-0 run to build its largest lead of the half at 33-22 with 4:39 left on the clock. Fortunately for the Bucs, they managed some defensive stops in the final minutes of the half and ended on a 15-4 run of their own to tie the game at 37 at the break.

Mercer head coach Bob Hoffman was then called for a technical foul with .5 seconds left on the clock before the intermission, giving the Bucs the opportunity to tie the game. Most of the Bears’ offensive damage came in the paint (16-8) and courtesy of a 20-8 advantage on the boards. While ETSU shot 67 percent from 3-point range (8-of-12), Mercer’s bench outscored the Bucs 18-0 in the opening 20 minutes.

After the break, Mercer once again put together a 7-0 run to make it 44-37 with 18 minutes left in regulation. The Bears maintained their lead until Cromer put the Bucs up at 54-53 with a layup. After the Bears regained the 70-65 advantage, the Bucs began utilizing their pressure, full-court defense and it was effective.

Several Mercer turnovers and two defensive stops by the Bucs led to a 10-1 ETSU run than made it 75-71 with 1:28 left. While Strawberry hit a 3-pointer to get it to 75-74 and the Bears got a steal on the Bucs’ next possession, Bradford came through again by blocking a layup attempt by Strawberry with 24 seconds left.

After Guyn was fouled and hit two free throws, Mercer again had an opportunity to tie with 16.7 seconds left. However, three attempts from 3-point range missed the mark for the Bears and ETSU escaped with the win. Bradford again had a block on that final possession.

The Bucs will now return home for their final home stand of the year, a two-game stretch that begins Thursday, Feb. 25 against Furman at 7 p.m. inside Freedom Hall. For more on ETSU men’s hoops, visit ETSUBucs.com and click on the men’s hoops link.