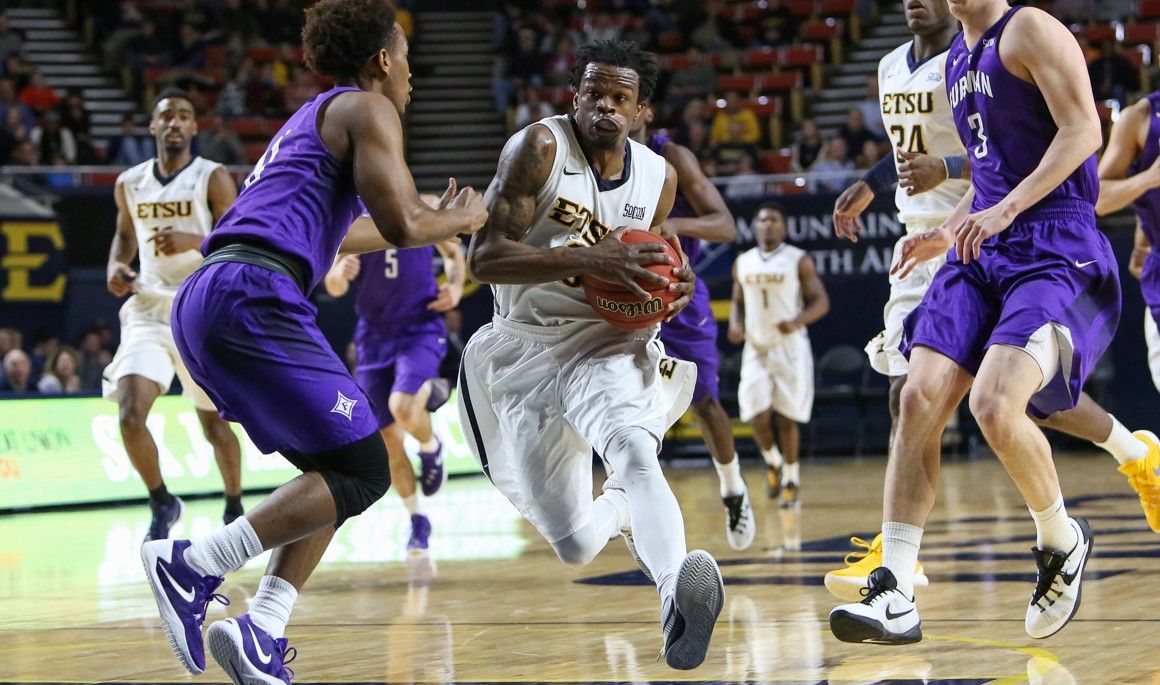 JOHNSON CITY, Tenn. (Feb. 25, 2016) – Building a 19-point halftime lead thanks to arguably its best opening 20 minutes of play this season, the ETSU men’s basketball team ultimately held off a second-half rally by Furman to take an 80-75 win over the Paladins in Southern Conference action Thursday at Freedom Hall.

With the win, the Bucs collected their sixth 20-win season since the 2002-03 campaign, improving to 20-10 overall, 13-4 in SoCon play. In addition, ETSU clinched second place in the league standings and still have a chance at first place, sitting one game back of league-leading Chattanooga entering this weekend’s play. Meanwhile, Furman dropped into a tie for third place in the league at 17-13, 11-6.

“What a great first half. Probably the best first half we’ve played this season,” said ETSU head coach Steve Forbes. “Our press was phenomenal and I think we turned them over nine times in a row at the start of the game. I’ve never had a team do that. The tale of the second half was they exposed us inside and started scoring in there, and then we came down and couldn’t make shots. When you don’t make shots you can’t get into your press, and that was a bad recipe for us.”

Certainly, the first half was perhaps the best 20 minutes of basketball this season for the Bucs, as their full-court, pressing defense forced Furman into 16 turnovers and resulted in a 23-6 advantage for ETSU in points off turnovers. A 19-3 offensive run early in the half combined with a 57 percent shooting percentage from the field and a 50 percent mark from 3-point range helped ETSU build a lead of as many as 22 points at 46-24, as the Bucs ended the first half up 19 at 48-29.

After the break, Furman did a much better job of possessing the basketball and ETSU’s offense struggled to find a rhythm, which allowed the Paladins to outscore the Bucs 28-11 over the first 12 minutes of the second half and pull to within two points at 59-57.

ETSU clung to the lead over the next five minutes of play before Bello scored eight of his 12 points to power a 10-0 burst for the Bucs and make it 74-60 with 3:36 left in the game. Furman did not go away though, scoring 11 straight of its own to make it 74-71 in the final minute. Fortunately for the Bucs, they hit enough foul shots down the stretch to ice the game.

For the game, ETSU shot 50 percent from the field and 47 percent from 3-point range. Furman held a 31-23 edge in rebounding, but the Bucs forced 21 turnovers for the Paladins in the game.

The Bucs will return to Freedom Hall for their final regular season home game of the season on Saturday, hosting Wofford at 4 p.m. as part of Senior Day festivities. For more on ETSU men’s hoops, visit ETSUBucs.com and click on the men’s hoops link.