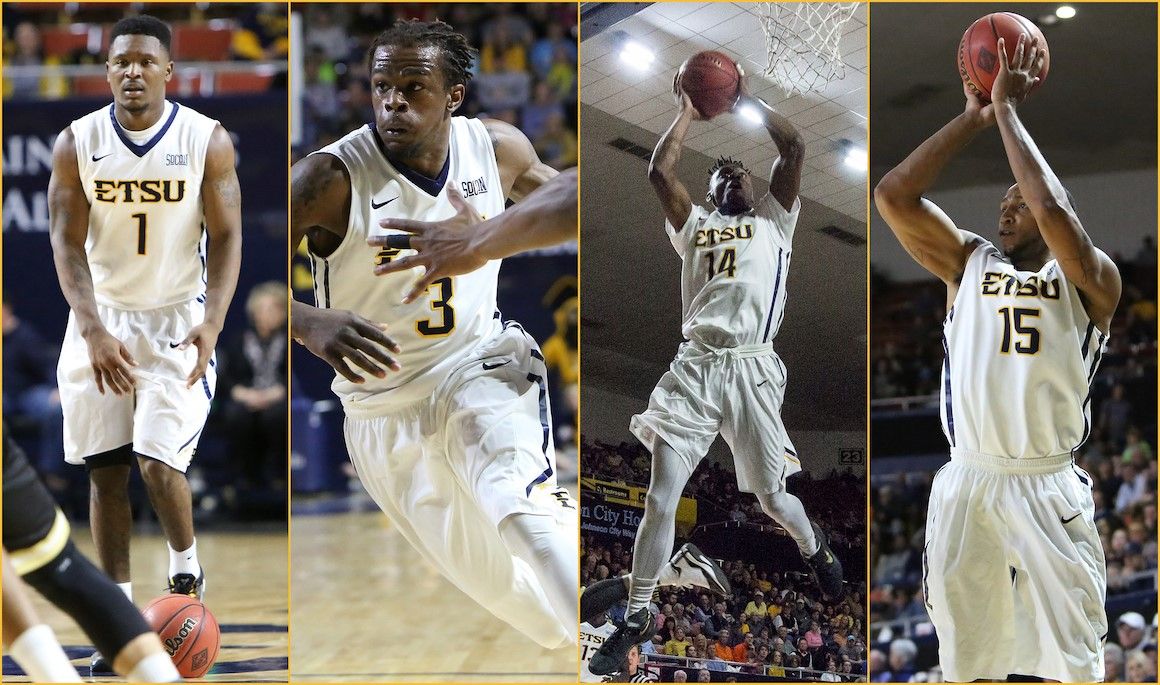 JOHNSON CITY, Tenn. (Feb. 27, 2016) – Did the fans of ETSU’s men’s basketball team expect anything else in the final regular season home game of the season?

In a year highlighted by the Buccaneers winning close games at home, ETSU battled through to a victory once again Saturday on Senior Day at Freedom Hall, as the Bucs sent their senior class out in style with a 71-66 win over Southern Conference foe Wofford.

With the victory, the Bucs improved to 21-10 overall, 14-4 in SoCon play and will be the No. 2 seed in the SoCon Tournament next week in Asheville, N.C., by virtue of Chattanooga’s win over Samford on Saturday. The Bucs – who could still earn a share of the SoCon regular season title with a Chattanooga lose at VMI on Monday – will play in the 6 p.m. game on Saturday, March 5 against the winner of the No. 7 and No. 10 seed game on Friday. Meanwhile, the Terriers dropped to 15-16, 11-7 and will be the No. 4 seed in the tournament.

“What a great atmosphere, a tremendous crowd, a great energy in the building today, and a fantastic way for our seniors to go out,” said ETSU head coach Steve Forbes, whose team posted the second most regular season SoCon wins in program history with 14. “I couldn’t be more proud of our seniors. They are so happy right now, and that was important to us. We wanted them to have a season like this in our first year here, and 14 conference wins is a testament to this team.

On a night when seniors Petey McClain (Mobile, Ala.), Lester Wilson (Knoxville), Ge’Lawn Guyn (Lexington, Ky.) and Deuce Bello (Greensboro, N.C.) were honored, it was juniors Peter Jurkin (Juba, South Sudan) and A.J. Merriweather (Jackson) that took their share of the headlines.

Jurkin finished with a career high eight rebounds and four blocks, but also scored eight points that included a pair of free throws with 15 seconds left to put the Bucs up three at 69-66. Then, Merriweather – who returned from a hand injury for the first time since a win over North Carolina Central back on Jan. 4 – battled to rebound a missed 3-point attempt by Wofford’s Eric Garcia and called timeout as he fell to the floor with seconds left in the game, essentially wrapping up the win for the Bucs.

For the game, Guyn finished with a team high 20 points, while junior guard T.J. Cromer (Albany, Ga.) had 16 and sophomore guard Desonta Bradford (Humboldt) pitched in 10. For Wofford, freshman guard Fletcher Magee had a game-high 22 points, including three 3-pointers in the second half that kept the Terriers in the contest.

In the first half, the Bucs got off to a fantastic start for the second straight game, using their full court press defense to build a 17-4 lead eight minutes into the contest. Unfortunately, the Bucs were not able to maintain that pace due to foul trouble and Wofford used the rest of the half to pull to within one at 38-37.

The opening 20 minutes were marred by a plethora of calls from the referees, as the two teams combined for 31 fouls before the intermission.

After the break, the Bucs again pulled ahead by eight points at 49-41, but Wofford would not go away, ultimately outscoring ETSU 14-4 over the next six minutes of play to take the lead at 55-53. The game stayed tight the rest of the way until Jurkin’s free throws in the final seconds gave the Bucs a one-possession lead.

For the game, ETSU shot 51 percent from the floor and held the Terriers to a 35 percent clip. The Bucs enjoyed a 32-16 advantage on points in the paint and a 14-2 edge in fast break points.

ETSU will now enjoy a week-long break before opening play in the Southern Conference Tournament next Saturday, March 5 in Asheville, N.C. For more on ETSU men’s hoops, visit ETSUBucs.com and click on the men’s hoops link.