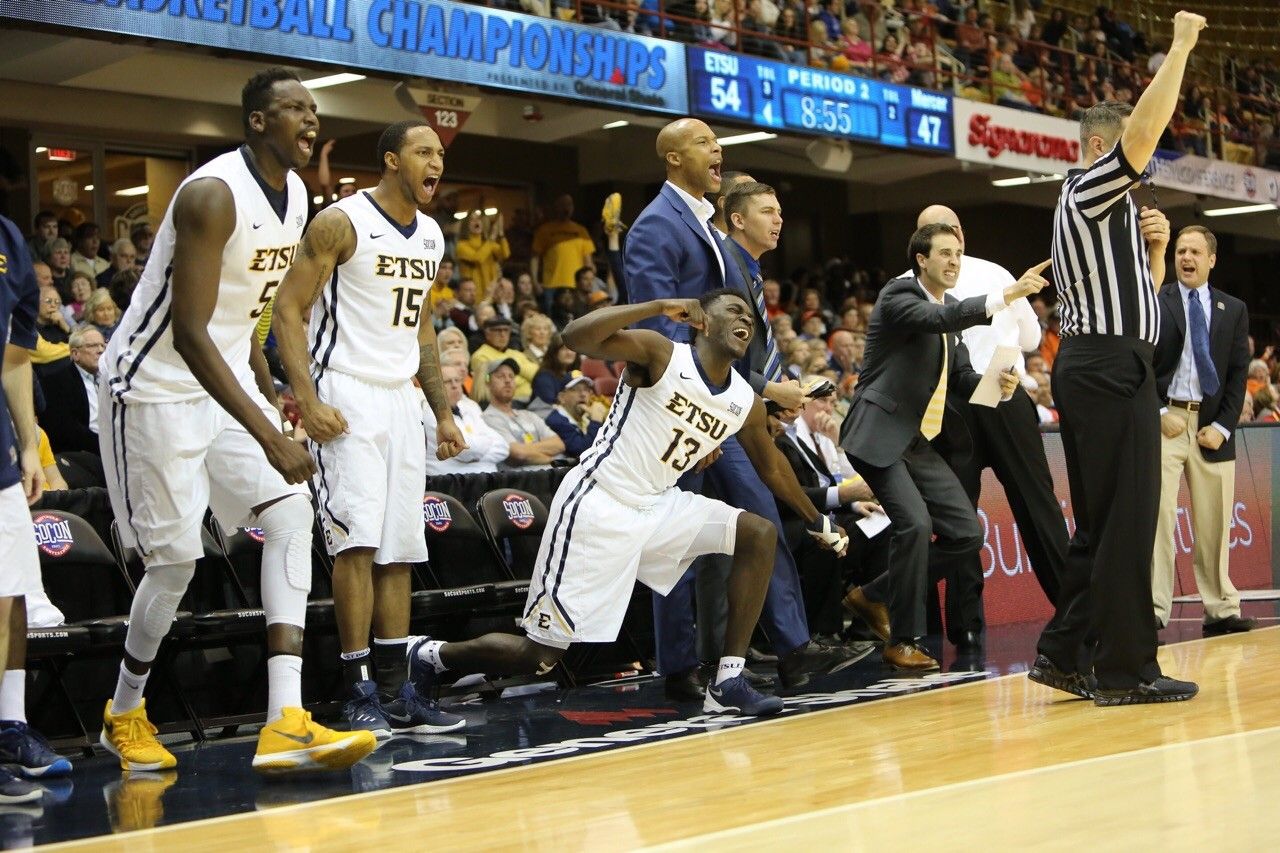 The ETSU bench celebrates as the Bucs wrap up an 81-65 victory over Mercer Saturday night in the SoCon quarterfinals.
ETSU drops Mercer 81-65 to advance to SoCon semis
Mercer at ETSU | March 05, 2016
Related Links

ASHEVILLE, N.C. (March 5, 2016) – With a defensive effort that held the Mercer Bears to 37 percent shooting for the game, the No. 2 seeded ETSU men’s basketball team pulled away in the second half to capture an 81-65 win Saturday evening in the quarterfinals of the Southern Conference Tournament presented by General Shale at the U.S. Cellular Center.

With the win, the Bucs picked up their sixth straight victory, improved to 22-10 on the year, and defeated Mercer for the third time this season. Most importantly, ETSU survives and advances to play Furman in Sunday's semifinal at 7:30 p.m. The Paladins advanced with a win over UNC Greensboro in Saturday's nightcap.

"I knew we were in good shape at halftime, because I thought they threw everything they had at us in the first half,” said ETSU head coach Steve Forbes. “The difference was our defensive effort. We were making shots, but it’s when we calmed down and started getting stops that we pulled away. Holding them to 37 percent shooting says something about that effort.”

The first half got off to a great start for the Bucs, as ETSU went to its full court press defense right out of the gate and disrupted the Bears’ offensive game plan. The Bucs’ offense thrived during that span and the result was a 17-5 lead five minutes into the contest.

Unfortunately for ETSU, the Bears regrouped quickly and the Bucs’ offensive rhythm dissipated. The result was an 18-0 run for the Bears, as ETSU went scoreless for over six minutes of game play and found themselves trailing 23-17 with nine minutes left in the first half.

While the Bucs ultimately trailed by as many as six points at 30-24, ETSU outscored Mercer 13-5 to close the half and led 37-35 at the break. The Bucs are now 16-0 on the season when leading at halftime.

In the second half, the Bucs methodically built a lead of 54-45 with 9:57 left in regulation, thanks in part to back-to-back 3-pointers from Cromer and a strong defensive effort from junior post Peter Jurkin (Jubah, South Sudan), who posted four blocks in the opening 30 minutes of game play. From there, the Bucs gradually built their lead until taking an 18-point advantage at 77-59 on a 3-pointer by Guyn with less than three minutes left in the game.

It was a memorable and historic win for the Bucs. After winning 14 straight games in this venue from 1989 to 1993 and capturing four straight titles in Asheville, this marked the first win for ETSU in the U.S. Cellular Center since the 1995 tournament. For more on ETSU men’s basketball throughout the SoCon Tournament, visit ETSUBucs.com and click on the men’s hoops link.