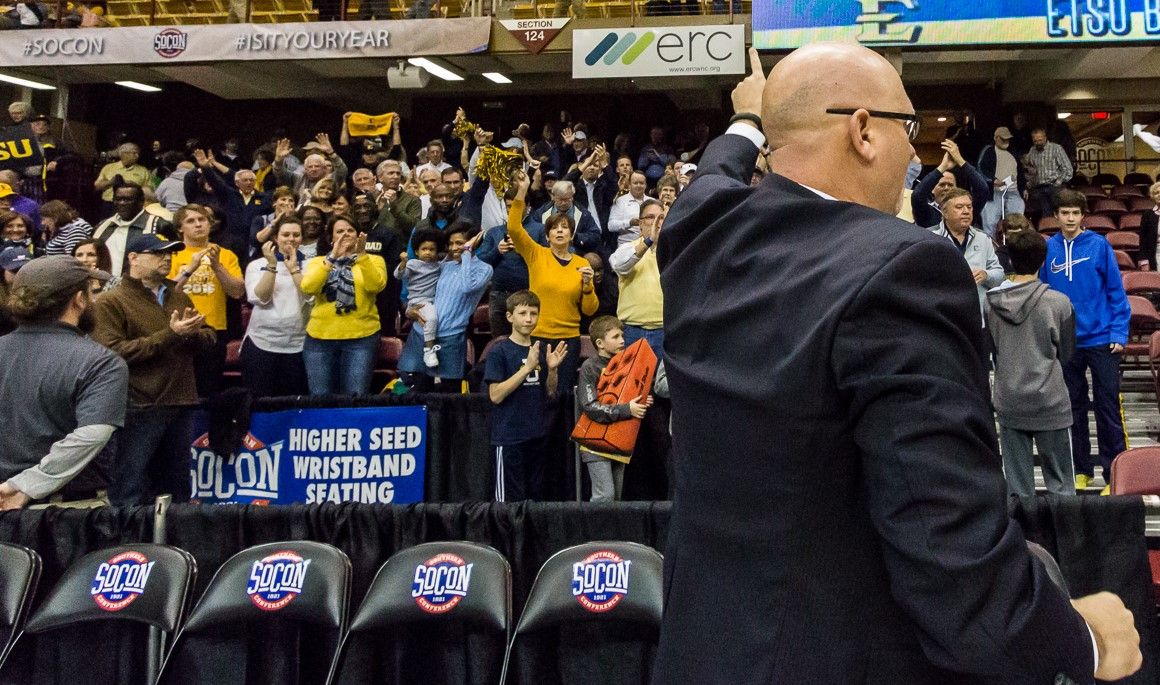 ASHEVILLE, N.C. (March 6, 2016) – The Southern Conference is getting its dream matchup.

Holding SoCon player of the year Stephen Croone to single-digit scoring for the first time in the past 22 games, the No. 2 seeded ETSU men’s basketball team’s defensive effort was championship caliber, as the Buccaneers raced past No. 3 seed Furman 84-76 Sunday evening in the semifinals of the Southern Conference Tournament at the U.S. Cellular Center.

With the win, the Bucs improved to 23-10 on the season, but most importantly earned a spot in the SoCon title game against arch rival Chattanooga Monday night at 9 p.m. on ESPN2. The Mocs made it to the final by virtue of a 73-69 win over Western Carolina in the day’s other semifinal.

“When you think about it, we started the year on ESPN2 and now we are playing on ESPN2 again tomorrow night,” said ETSU head coach Steve Forbes, whose team has won seven straight and 18 of its last 22 contests. “That says a lot about where this team has come from and what they’ve accomplished this year. Our defensive effort tonight was great and it’s been that way the last two games in the tournament.”

The story of the first half – and truly the whole game – was the Bucs defensive effort on Croone. He was held scoreless in the opening 20 minutes, primarily by the man-to-man defense applied by ETSU’s senior guard Petey McClain (Mobile, Ala.).

Even with Croone out of the picture offensively, Furman still led 25-20 with seven minutes left in the half. However, at that point the Bucs closed on an 18-6 run and hit six of their last seven shots to lead 38-31 at the intermission. ETSU shot 58 percent from the field and 56 percent from 3-point range in the first half.

After the break, the Bucs methodically built on their halftime lead and ultimately held a 15-point advantage at 66-51 with eight minutes left in the contest. However, at that point Furman made a move with nine straight points to make it 66-60. ETSU answered, as Bradford stopped the momentum with a bucket and ignited a quick 7-0 run for the Bucs. For Bradford, 13 of his 15 points came in the decisive second half.

For the game, ETSU shot 54 percent from the field and for the second straight game went 24-of-27 from the charity stripe (89 percent). In addition, Banks and junior post Peter Jurkin (Juba, South Sudan) were excellent offensively on the inside, going 9-of-12 from the field.

The Bucs will now move on to face the Mocs in the championship. ETSU is 8-3 all-time in conference title games, including a 3-2 record against Chattanooga. The Bucs are 6-2 in SoCon title games. For more on ETSU men’s basketball throughout the SoCon Tournament, visit ETSUBucs.com and click on the men’s hoops link.