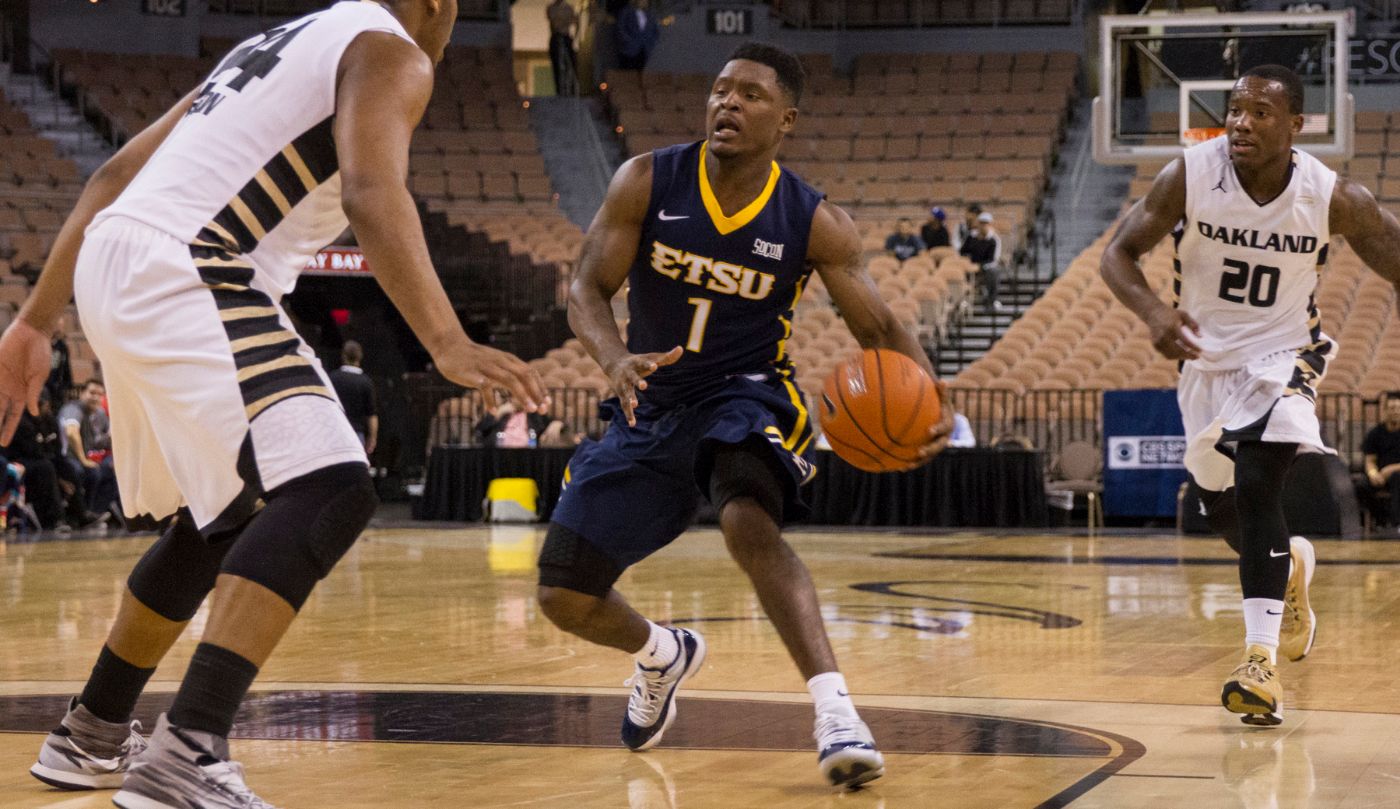 Senior Petey McClain and the Bucs had their season come to a close Tuesday night in a loss to Oakland. Photo courtesy of Jeremy Rincon.
Late run lifts Oakland past ETSU in Vegas 16 semis
ETSU at Oakland | March 29, 2016
Related Links

Facing an Oakland squad that has averaged a nation’s best 86.4 points per game this season, the Buccaneers still led 53-52 early in the second half, but looked on as the Golden Grizzlies scored 42 points over a decisive 11-minute stretch and ran away with an 104-81 victory Tuesday night in the semifinals of the Vegas 16 at Mandalay Bay.

With the loss, ETSU’s season comes to a close at 24-12, while Oakland improves to 23-11 and moves on to face Old Dominion in the Vegas 16 finals Wednesday night.

“Oakland has a very good team and they just beat us tonight,” said ETSU head coach Steve Forbes. “Not a lot of teams have an opportunity to end the season with a win and we had that chance in this tournament. It didn’t work out for us, but that doesn’t take anything away from what this team accomplished. 24 wins is the third most in our program’s history and that’s saying something. This team was a lot of fun to coach and they really set a standard for what we want to build here.”

Oakland was led by Horizon League player of the year Kay Felder, who finished with a triple-double on the night thanks to 29 points, 10 rebounds and 10 assists. Meanwhile, teammate Max Hooper lived up to his reputation as one of the nation’s top 3-point shooters, as he hit eight shots from beyond the arc in the game and finished with 28 points. In all, Oakland went 15-of-34 from long range on the night.

In the first half, Oakland took an early lead but an 11-0 run by the Bucs made it 13-6 in favor of ETSU with 14 minutes left before the break. At that point, Hooper hit four 3-pointers and scored 13 of the Golden Grizzlies next 22 points to put Oakland back on top at 28-27.

From there, ETSU methodically regained the advantage after eight straight points from Bradford and a layup courtesy of Merriweather made it 37-30 with 4:57 left in the half. Unfortunately for the Bucs, ETSU went scoreless the rest of the way and allowed Oakland to end the half on a 9-0 offensive run to lead 39-37 at the break.

After the intermission, ETSU battled back and forth with Oakland and actually led 53-52 following a 3-pointer by Wilson. However, the Golden Grizzlie offense took off at that point, scoring 42 points over the next 11 minutes of play to take a 94-74 lead and never look back.