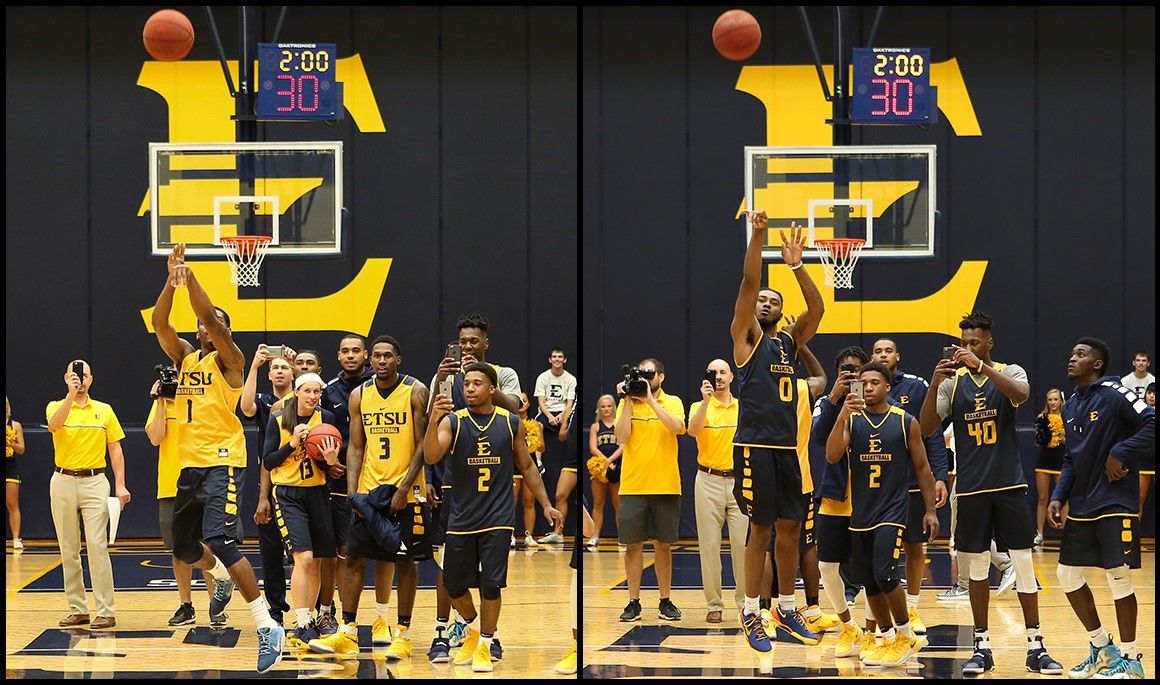 The highlight of the night came at the end of the event, as senior T.J. Cromer (Albany, Ga.) and junior Devontavius Payne (Carbondale, Ill.) made ETSU students Garrett Pack and Jeremiah Pearson the happiest two people on campus. After being selected to attempt a half-court shot for free tuition, Pack and Pearson’s attempts both missed the mark. However, ETSU Director of Intercollegiate Athletics Dr. Richard Sander stepped in and offered one more attempt, telling the students they could pick a player to take the shot.

Pack selected Payne, who stepped to the line first, guaranteed he would make it, and then proceeded to sink the shot. A wild celebration ensued around the court, with other students joining in. Not to be outdone, Cromer made the same guarantee to Pearson and followed through again, sinking a second shot from midcourt. The Brooks Gym crowd erupted once more.

“What a great way to end a great event,” Sander said.

At the end of the annual event, the Buccaneer faithful erupted once again as the ETSU women’s basketball team lined-up at half-court and showed off their dancing skills to the raucous crowd.

While the free tuition shots stood out, Bluenanza once again treated fans to special contests, dunk exhibitions, impromptu dancing performances from both teams, and a brief scrimmage by the men’s basketball team.

“This is a great opportunity for us to thank our fans and build more excitement for the season,” said men’s basketball head coach Steve Forbes. “Our team enjoys a chance to come out here, relax and enjoy this event with the people that support us throughout the year.”

Women’s basketball head coach Brittney Ezell said it’s all about relationships and building loyalty with the Buccaneers’ fan base.

“Bluenanza is a fantastic opportunity for us to connect with our fan base,” Ezell said. “Tonight is all about welcoming our fans into the ETSU basketball community. It was a great show.”

The event, which was free to the public, featured both programs in traditional 3-point shooting challenges, dunk exhibitions, and intra-squad workouts. Fans also had the opportunity to hear from both Forbes and Ezell about their expectations for the upcoming season.

For more on ETSU men’s and women’s basketball throughout the 2016-17 season, visit ETSUBucs.com and click on the basketball links.