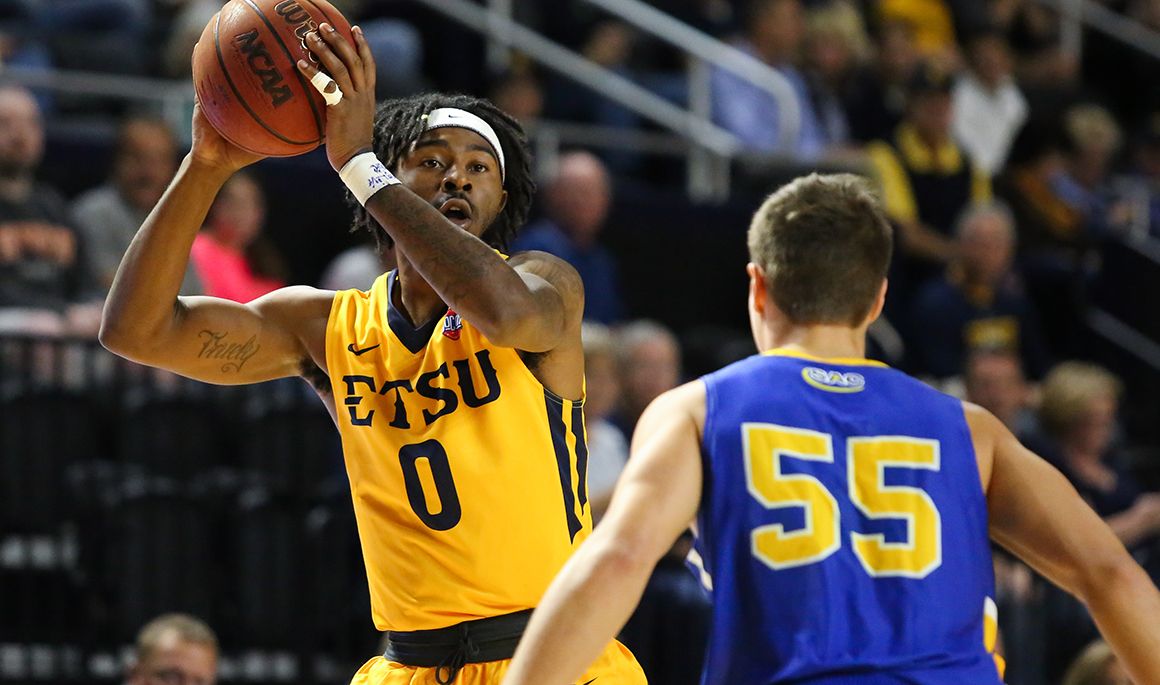 Senior T.J. Cromer and the Bucs are set to open a new season after a 24-win campaign a year ago.
Men's hoops set for season opener Friday vs. Fordham
Fordham at ETSU | November 11, 2016
Related Links

JOHNSON CITY, Tenn. (Nov. 11, 2016) – The wait will finally be over for ETSU men’s basketball fans on Friday night,  as the 2016-17 regular season will open inside a newly-renovated Freedom Hall when the Buccaneers host Atlantic 10 Conference foe Fordham. Tip is set for 7 p.m.

After a successful debut season that ended with 24 wins and a postseason tournament berth, ETSU head coach Steve Forbes enters his second campaign on the Bucs’ bench with high expectations. Forbes’ team has been picked by both the Southern Conferences’ coaches and media to finish second in the league and challenge defending champion Chattanooga for a conference crown.

Veterans and active military are encouraged to attend Friday night’s game and will receive a free ticket with their military ID, as the Buccaneers celebrate Veterans Day with a special appreciation offer for those that have served our country.

Following Friday’s game, the team will continue with a second straight home contest to open the season, hosting Detroit Mercy on Monday evening at 7.

Tickets for both games can be purchased by contacting the ETSU athletics ticket office at 423-439-ETSU (3878) or by visiting ETSUBucs.com and clicking on the tickets link.

In his first season as head coach of the ETSU men’s basketball program, Steve Forbes wasted little time reinvigorating the Buccaneers’ program with an energetic style of play, an engaging approach with the fan base, and plenty of success on the court … In all, the Bucs finished the 2015-16 season with 24 wins – which marks the program’s third highest win total in the modern era – and collected 14 victories in Southern Conference play, which is second only to the 15 collected by the Bucs’ 2003-04 squad … ETSU also reached the Southern Conference Tournament finals, which marked the 12th time the program has played in a conference championship game, and the team also earned a postseason tournament berth for the 14th time with an invite to the inaugural Vegas 16 Tournament … Heading into the 2016-17 season, the Bucs will be losing players such as first-team All-SoCon performer Ge’Lawn Guyn (Lexington, Ky.), 1,000-point club member Lester Wilson (Knoxville), high-flying dunk specialist Deuce Bello (Greensboro, N.C.), and steady point-guard presence Petey McClain (Mobile, Ala.) … Last year, Guyn averaged 18.3 points per game, while Bello and Wilson combined for another 16 points a contest … However, not all of the production from a year ago is gone, as All-SoCon selection T.J. Cromer (Albany, Ga.) returns after averaging 14.9 points and a team high 3.1 assists per game a year ago … In addition, players such as All-SoCon Tournament selection Desonta Bradford (Humboldt), who averaged 7.6 points and 2.9 rebounds a year ago, and veterans like A.J. Merriweather (Jackson) and Isaac Banks (New Orleans, La.) will be back on the court for the Bucs … Post Peter Jurkin (Juba, South Sudan) will also return after a season in which he showed marked improvement throughout and finished averaging 5.3 points and 3.1 rebounds per game … Fans will also get to see two new players on the floor this year that sat out as redshirts a year ago … This duo includes transfers Hanner Mosquera-Perea (Istmina, Colombia) from Indiana and Tevin Glass (Norcross, Ga.) from Wichita State … Perea and Glass are both post players who will quickly add depth and talent in the paint … Along with these eight returning players, the Bucs will also be adding six new recruits to the team, a group that includes a couple of Junior College All-Americans and a great deal of offensive firepower … The class is comprised of guards Devontavius Payne (Carbondale, Ill.), Julian Walters (Madison, Wis.), Jason Williams (Detroit), Jermaine Long (New Orleans) and transfer Kanayo Obi-Rapu (Greensboro, N.C.), along with forward David Burrell (Milwaukee).

The series vs. Fordham

This is the first meeting between the Bucs and the Rams.

JOHNSON CITY, Tenn. (Nov. 5, 2016) – Using a frenetic pace on offense to shoot 59 percent from the floor, dish out 20 assists and put four players in double figures, the ETSU men’s basketball surged in the second half and cruised to a 104-67 win over Mars Hill in exhibition basketball action Saturday afternoon inside Freedom Hall. ... Junior guard Devontavius Payne (Carbondale, Ill.) and senior post Hanner Mosquera-Perea (Istmina, Colombia) enjoyed their Buccaneer debuts, as Payne scored a team-high 17 points and Mosquera-Perea added 14 points and five rebounds. Meanwhile, senior guards A.J. Merriweather (Jackson) and T.J. Cromer (Albany, Ga.) collected 12 and 11 points, respectively, while senior guard Desonta Bradford (Humboldt) dished out a game-high six assists without a turnover. ... Indeed, early on the Lions made it interesting, as the first half was a scoring fest for both teams. The Bucs shot 59 percent0from the field and 42 percent from beyond the arc in the opening 20 minutes. Meanwhile, the Lions were equally on target, posting a 56 percent clip from the field and 50 percent mark from 3-point range. The result was a 51-43 halftime score. ... In fact, Mars Hill led much of the first half and held a 35-28 advantage with 7:28 left before the intermission. At that point, Payne scored 10 of the Bucs next 14 points to spark a 14-2 ETSU run and take the lead at 42-37. The Bucs ultimately outscored Mars Hill 21-8 over the last seven minutes of the half and enjoyed a 51-43 cushion into the break. ... After the intermission, the Bucs came out on fire offensively and clamped down on the Mars Hill offense, going on a 16-4 run to open the half and lead 67-47 with just under 16 minutes left in regulation. The ETSU advantage ultimately grew to as many as 38 by the end of the game. ... For the contest, the Bucs were an impressive 16-of-16 from the charity stripe and out-rebounded Mars Hill, 32-27. ETSU also collected 12 steals off 20 Lions’ turnovers for the game, while holding Mars Hill to just 31 percent shooting from the floor and a 17 percent clip from 3-point range in the second half. ... The Lions were led by a game-high 18 points from Bennett Wilson, while Valentin Bauer netted 12.

Connections between the Bucs and Rams

In a Basketball Times’ story by Tony Jimenez earlier this year, ETSU head coach Steve Forbes and his staff are were praised for their recruiting efforts at the junior college level. ... In fact, the Bucs’ 2016-17 recruiting class -- which includes JuCo first team All-Americans -- was ranked No. 2 in the nation behind only Southeastern Conference member Arkansas ... The Bucs ranked ahead of schools such as Kent State, Houston and Utah ... In all, the Bucs’ seven-player recruiting class for this year included five junior college additions.

The wait is over: Mosquera-Perea, Glass set for debut

For the last year, ETSU fans have waited patiently as they watched senior posts Hanner Mosquera-Perea (Istmina, Colombia) and Tevin Glass (Norcross, Ga.) sitting on the ETSU bench ... The two transfers -- Mosquera-Perea from Indiana and Glass from Witchita State -- are now eligible and the anticipation to see the two athletic players on the floor is growing ... Both will give the Bucs added size and depth on the inside this season, joining returning players such as senior posts Isaac Banks (New Orleans) and Peter Jurkin (Juba, South Sudan).

SPARTANBURG, S.C. (Oct. 26, 2016) – The ETSU men’s basketball team was picked to finish a close second behind Chattanooga in both the preseason coaches and media polls released Wednesday by the Southern Conference. ... ETSU was slotted second (74) and received two first-place votes in the coaches poll, along with four first place votes in the media poll. Head coach Steve Forbes led the Bucs to a 24-12 mark in his first season at ETSU. The Bucs went 14-4 in league play and advanced to the title game of the league tournament. ETSU advanced to the postseason in 2016 and participated in the Vegas 16 tournament. ... In addition, the Buccaneers’ placed senior guard T.J. Cromer (Albany, Ga.) and senior post Hanner Mosquera-Perea (Istmina, Colombia) on the preseason All-SoCon team. Cromer was an all-conference selection a year ago, while Mosquera-Perea is entering his first season with the Bucs after starting at center for Big 10 Conference power Indiana earlier in his college career. ... Eight of the 10 Southern Conference teams will take the floor Nov. 11 to start the regular season. The 2017 Southern Conference Championship presented by General Shale will be held March 3-6 at the U.S. Cellular Center in Asheville, N.C.

JOHNSON CITY, Tenn. (Nov. 2, 2016) – Following the success of last season’s Johnson City Honda “So You Think You Can Sing?” Challenge, the ETSU Department of Intercollegiate Athletics announced Wednesday two new, in-game competitions that will begin with the season openers for the Buccaneers’ men’s and women’s basketball programs later this month. ... The Johnson City Honda “So You Think You’ve Got Talent?” Challenge will once again be comprised of one-on-one competitions between two contestants at halftime of men’s basketball games. In addition, the Johnson City Honda “So You Think You Can Shoot?” Challenge will feature one ETSU fan in a shooting competition at halftime of women’s basketball games. ... The “So You Think You’ve Got Talent” (#ETSUTalent) competition will feature a tournament-style bracket with winner’s advancing and one person ultimately being crowned the winner at the end of the regular season. The finalist for the #ETSUTalent competition will win a $4,000 grand prize, while the shooting competitors will vie for individual cash prizes at each game. There will also be special opportunities for contestants to double their money with randomly-selected shots. ... Fans interested in attempting to compete in the “So You Think You’ve Got Talent?” contest can call for more information and submit their audition tapes to Reed Darden by e-mailing [email protected] or by calling 423-439-5286. Submissions should be made no later than Nov. 9, two days prior to the men’s basketball season opener versus Fordham on Nov. 11. Meanwhile, competitors for the “Shooting” contest will be selected via social media when they comment on ETSU athletics via Facebook, Twitter or Instagram and use the hashtag #IThinkICanShoot. ... While the “Shooting” competition will be determined on the floor, the #ETSUTalent competition winners at each game will be selected by ETSU fans. Following each performance, fans will be able to vote for their favorite performer for up to 24 hours following ETSU basketball games by visiting the ETSU Athletics Facebook page and “liking” their favorite performance via Facebook Live. ... For more on ETSU basketball and promotions throughout the year, visit ETSUBucs.com and click on the basketball links.