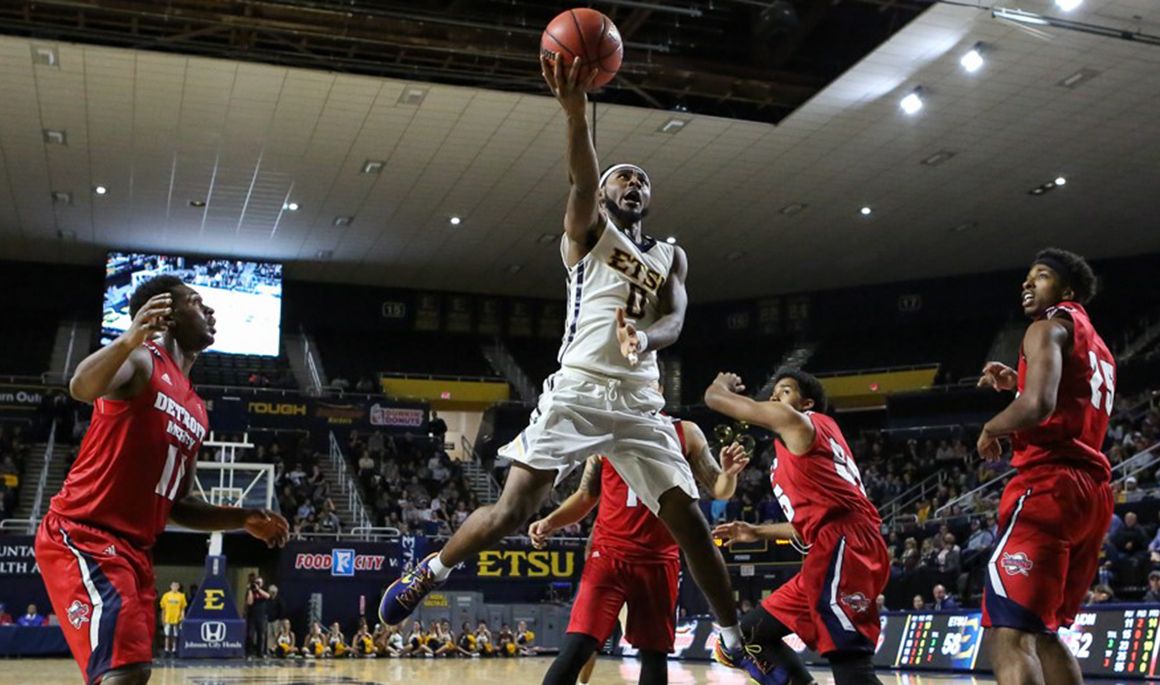 JOHNSON CITY, Tenn. (Nov. 14, 2016) – Shooting 68.3 percent from the floor and outscoring Horizon League foe Detroit Mercy by 19 in the second half, the ETSU men’s basketball team rolled to its second win of the season 107-78 Monday evening inside Freedom Hall.

“I’ve never had a team shoot like that in back-to-back games at any level,” said ETSU head coach Steve Forbes, whose team has eclipsed 60 percent shooting from the floor in both games this season and nearly bested the ETSU single-game record for shooting percentage (68.8 percent) on Monday. “It’s hard to be unhappy with another 30-point win, but we need to be more consistent defensively and with our effort.”

It was hard to find any disappointing statistics for ETSU. The Bucs outscored the Titans 56-24 in the paint, 47-21 in bench points, blocked six shots, and dished out 21 assists on the night. The only issue for the Bucs were 15 turnovers, most of which came in the early part of the game.

In the first half, the Titans hung around thanks to those untimely turnovers and the Bucs’ off-the-mark shooting from beyond the arc. However, after holding a slim one-point lead at 22-21, junior guard Julian Walters (Madison, Wis.) ignited ETSU by coming off the bench to hit back-to-back 3-pointers and make it 28-21 in favor of the Bucs with six minutes left before the half.

From there, the Bucs lead grew to as many as 12 before ETSU ultimately took a 43-33 advantage into the halftime locker room. In the first half, ETSU shot 68 percent from the floor and was led by 13 points from Cromer.

Much like the Bucs’ opener against Fordham on Friday night, ETSU raced out of the gates offensively in the second half and never looked back. While the Titans did pull to within six at 48-42 early in the half, a 12-4 run at that point and another 16-0 surge midway through the half made it 84-62 in favor of the Bucs with seven minutes left in regulation.

The Bucs’ run was highlighted by multiple dunks from players such as Desonta Bradford (Humboldt), the outside shooting of Payne, and the high percentage shooting of inside players like Banks, Mosquera-Perea, and junior forward David Burrell (Milwaukee). Mosquera-Perea also picked up his second straight game with four blocks, while Cromer added to his offensive night with a game-high six assists.

The Titans, who dropped to 1-1 on the year, were led by a team-high 25 points from guard Josh McFolley, while fellow guard Jaron Williams added 16 in the losing effort.

The Bucs will now hit the road for four straight games, beginning Sunday at UNC Wilmington. For more on ETSU men’s hoops throughout the 2016-17 season, visit ETSUBucs.com and click on the men’s hoops link.