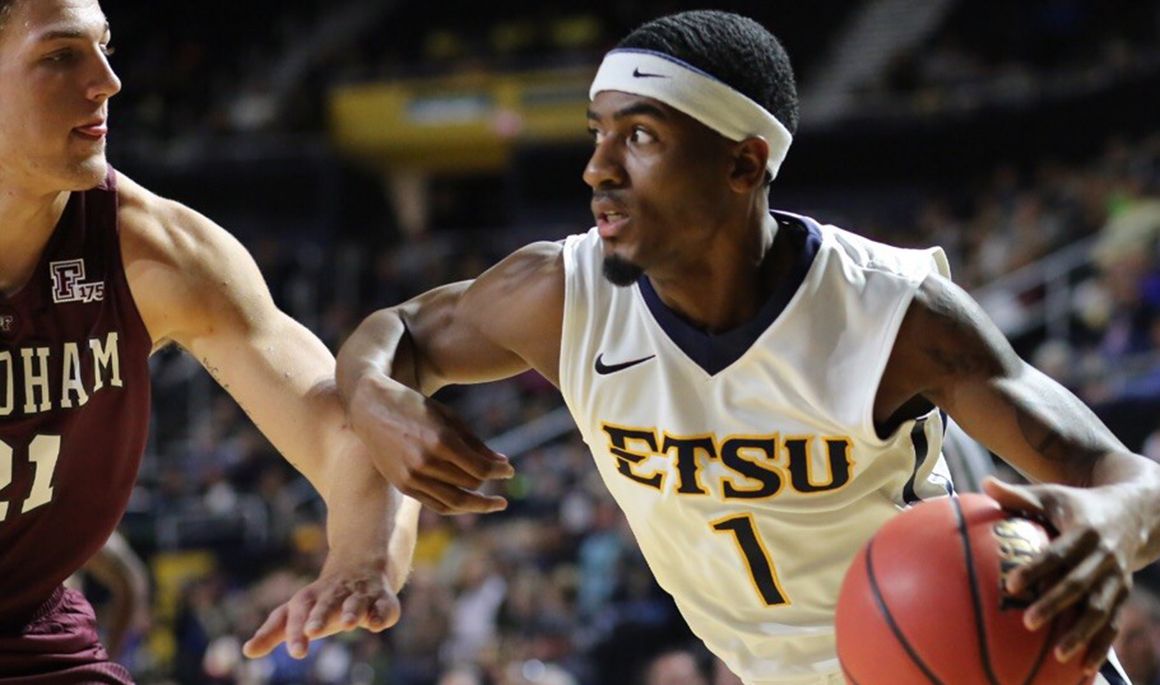 JOHNSON CITY, Tenn. (Nov. 19, 2016) – The ETSU men’s basketball team will put its perfect 2-0 start on the line Sunday, as the Buccaneers travel to face a challenge from the defending Colonial Athletic Association champion UNC Wilmington. Tip is set for 3 p.m. inside Trask Coliseum.

The Bucs and Seahawks met last year, with UNCW taking a 94-73 win in Johnson City, and showing the talent that led the team to a CAA title and a first-round near upset of ACC power Duke in the NCAA Tournament. This matchup Sunday will feature two teams currently ranked in the CollegeInsider.com Mid-Major Poll, with the Bucs ranked 21st and UNCW ranking 6th.

This will be the first game of four-straight away from home for the Bucs, who will travel later this week to participate in the three-game Sanford Pentagon Showcase hosted by South Dakota State in Sioux Falls, S.D.

In his first season as head coach of the ETSU men’s basketball program, Steve Forbes wasted little time reinvigorating the Buccaneers’ program with an energetic style of play, an engaging approach with the fan base, and plenty of success on the court … In all, the Bucs finished the 2015-16 season with 24 wins – which marks the program’s third highest win total in the modern era – and collected 14 victories in Southern Conference play, which is second only to the 15 collected by the Bucs’ 2003-04 squad … ETSU also reached the Southern Conference Tournament finals, which marked the 12th time the program has played in a conference championship game, and the team also earned a postseason tournament berth for the 14th time with an invite to the inaugural Vegas 16 Tournament … Heading into the 2016-17 season, the Bucs will be losing players such as first-team All-SoCon performer Ge’Lawn Guyn (Lexington, Ky.), 1,000-point club member Lester Wilson (Knoxville), high-flying dunk specialist Deuce Bello (Greensboro, N.C.), and steady point-guard presence Petey McClain (Mobile, Ala.) … Last year, Guyn averaged 18.3 points per game, while Bello and Wilson combined for another 16 points a contest … However, not all of the production from a year ago is gone, as All-SoCon selection T.J. Cromer (Albany, Ga.) returns after averaging 14.9 points and a team high 3.1 assists per game a year ago … In addition, players such as All-SoCon Tournament selection Desonta Bradford (Humboldt), who averaged 7.6 points and 2.9 rebounds a year ago, and veterans like A.J. Merriweather (Jackson) and Isaac Banks (New Orleans, La.) will be back on the court for the Bucs … Post Peter Jurkin (Juba, South Sudan) will also return after a season in which he showed marked improvement throughout and finished averaging 5.3 points and 3.1 rebounds per game … Fans will also get to see two new players on the floor this year that sat out as redshirts a year ago … This duo includes transfers Hanner Mosquera-Perea (Istmina, Colombia) from Indiana and Tevin Glass (Norcross, Ga.) from Wichita State … Perea and Glass are both post players who will quickly add depth and talent in the paint … Along with these eight returning players, the Bucs will also be adding six new recruits to the team, a group that includes a couple of Junior College All-Americans and a great deal of offensive firepower … The class is comprised of guards Devontavius Payne (Carbondale, Ill.), Julian Walters (Madison, Wis.), Jason Williams (Detroit), Jermaine Long (New Orleans) and transfer Kanayo Obi-Rapu (Greensboro, N.C.), along with forward David Burrell (Milwaukee).

The series vs. UNC Wilmington

The Bucs and Seahawks are tied 5-5 in the all-time series, with UNC Wilmington having evened the record thanks to a a 94-73 win a year ago back in Johnson City on Nov. 28, 2015.

Last time out vs. UNC Wilmington

JOHNSON CITY, Tenn. (Nov. 28, 2015) – Committing a season-high 21 turnovers and being out-rebounded 39-24 for the game, the ETSU men’s basketball team had no answers for an undefeated UNC Wilmington squad in a 94-73 loss to the Seahawks inside Freedom Hall ... A crowd of 2,557 looked on as the Buccaneers, who dropped to 3-3 on the year, tried to make a game of it early in the second half when junior guard T.J. Cromer (Albany, Ga.) connected on a 3-pointer to pull ETSU to within eight points at 48-40. However, UNCW responded to that threat with a lightning quick 13-0 offensive run to make it 61-40 and the Seahawks

never looked back. With the win, UNC Wilmington improves to a perfect 4-0 onthe year. ... Along with the turnover and rebounding numbers, the Seahawks also shot an impressive 58.6 percent from the field and 37 percent from 3-point range. UNCW was led by Chris Flemmings 18 points, while four other teammates reached  double figures. ... The Seahawks lived up to their reputation in the first half, utilizing an aggressive full court defense and a torrid offensive pace to force 12 ETSU turnovers and shoot 53 percent from the field. UNCW also held a decisive advantage on the glass before the break, out-rebounding the Bucs 21-13. Those numbers helped the Seahawks build a lead of as many as 18 points at 48-30 with 1:54 left before the intermission. ... At that point, ETSU answered with a 7-0 run and finished the half within striking distance at 48-37. ... After the break, Cromer’s 3-pointer made it 48-40 with less than a minute gone in the half, but from there the Bucs were outscored 46-33 the rest of the way.

JOHNSON CITY, Tenn. (Nov. 14, 2016) – Shooting 68.3 percent from the floor and outscoring Horizon League foe Detroit Mercy by 19 in the second half, the ETSU men’s basketball team rolled to its second win of the season 107-78 Monday evening inside Freedom Hall. ... The Buccaneers (2-0) were led by a career-high 27 points from senior guard T.J. Cromer (Albany, Ga.), while junior transfer Devontavius Payne (Carbondale, Ill.) collected 18 points. In addition, senior posts Isaac Banks (New Orleans) and Hanner Mosquera-Perea (Istmina, Colombia) netted 12 and 10 points, respectively, with Banks going a perfect 6-of-6 from the field. ... It was hard to find any disappointing statistics for ETSU. The Bucs outscored the Titans 56-24 in the paint, 47-21 in bench points, blocked six shots, and dished out 21 assists on the night. The only issue for the Bucs were 15 turnovers, most of which came in the early part of the game. ... In the first half, the Titans hung around thanks to those untimely turnovers and the Bucs’ off-the-mark shooting from beyond the arc. However, after holding a slim one-point lead at 22-21, junior guard Julian Walters (Madison, Wis.) ignited ETSU by coming off the bench to hit back-to-back 3-pointers and make it 28-21 in favor of the Bucs with six minutes left before the half. ... From there, the Bucs lead grew to as many as 12 before ETSU ultimately took a 43-33 advantage into the halftime locker room. In the first half, ETSU shot 68 percent from the floor and was led by 13 points from Cromer. ... Much like the Bucs’ opener against Fordham on Friday night, ETSU raced out of the gates offensively in the second half and never looked back. While the Titans did pull to within six at 48-42 early in the half, a 12-4 run at that point and another 16-0 surge midway through the half made it 84-62 in favor of the Bucs with seven minutes left in regulation. ... The Bucs’ run was highlighted by multiple dunks from players such as Desonta Bradford (Humboldt), the outside shooting of Payne, and the high percentage shooting of inside players like Banks, Mosquera-Perea, and others.

Following their season-opening win over Fordham and a victory over Detroit Mercy, the Bucs are currently ranked 21st in the most recent CollegeInsider.com Mid-Major Poll ... The Bucs face the No. 6 team on that list when they travel to UNCW.

Banks, Burrell and others shooting well this season

The Bucs have posted high shooting percentages in their first two games, and much of that is due to the accurate efforts of the team’s inside players ... For instance, entering the UNCW game, senior post Isaac Banks (New Orleans) is 11-for-11 from the field this season, while junior forward David Burrell (Milwaukee) is a perfect 10-of-10 on the year ... Burrell is also a perfect 4-for-4 from 3-point range ... In addition, senior transfer Hanner Mosquera-Perea (Istmina, Colombia) is 6-of-8 so far this season.

Entering Sunday’s game with UNCW, the Bucs lead the nation in field goal percentage, shooting a blistering 66 percent from the floor two games into the season ... With a 68.3 percent clip in the last game against UDM, ETSU came up just half a percentage shy of the program’s single game record ... Other categories where the Bucs are excelling include assists per game, rebound margin, scoring margin and scoring offense, among others ... A complete list of the Bucs’ current position in the national statistics can be found in the column to the left of this note.

While much was made of newcomers such as David Burrell (Milwaukee) and Devontavius Payne (Cardondale, Ill.) in the win over Fordham in the season opener ... Seniors T.J. Cromer (Albany, Ga.), A.J. Merriweather (Jackson) and Isaac Banks (New Orleans), as well as junior Desonta Bradford (Humboldt) combined to score 49 of the Bucs’ 96 points on the night. ... In addition, Bradford collected six assists and Cromer dished out three, while Banks, Merriweather and Bradford collected 10 rebounds as a group ... While the Bucs have high hopes for their eight new recruits, these numbers prove that the team’s returning players can also provide valuable production. ... That production continued in the Bucs’ second game of the season, with Cromer scoring a career high 27 points in the win, while newcomer Payne posted 18 points.

In a Basketball Times’ story by Tony Jimenez earlier this year, ETSU head coach Steve Forbes and his staff are were praised for their recruiting efforts at the junior college level. ... In fact, the Bucs’ 2016-17 recruiting class -- which includes JuCo first team All-Americans -- was ranked No. 2 in the nation behind only Southeastern Conference member Arkansas ... In all, the Bucs’ seven-player recruiting class for this year included five junior college additions.

SPARTANBURG, S.C. (Oct. 26, 2016) – The ETSU men’s basketball team was picked to finish a close second behind Chattanooga in both the preseason coaches and media polls released Wednesday by the Southern Conference. ... ETSU was slotted second (74) and received two first-place votes in the coaches poll, along with four first place votes in the media poll. Head coach Steve Forbes led the Bucs to a 24-12 mark in his first season at ETSU. The Bucs went 14-4 in league play and advanced to the title game of the league tournament. ETSU advanced to the postseason in 2016 and participated in the Vegas 16 tournament. ... In addition, the Buccaneers’ placed senior guard T.J. Cromer (Albany, Ga.) and senior post Hanner Mosquera-Perea (Istmina, Colombia) on the preseason All-SoCon team. Cromer was an all-conference selection a year ago, while Mosquera-Perea is entering his first season with the Bucs.