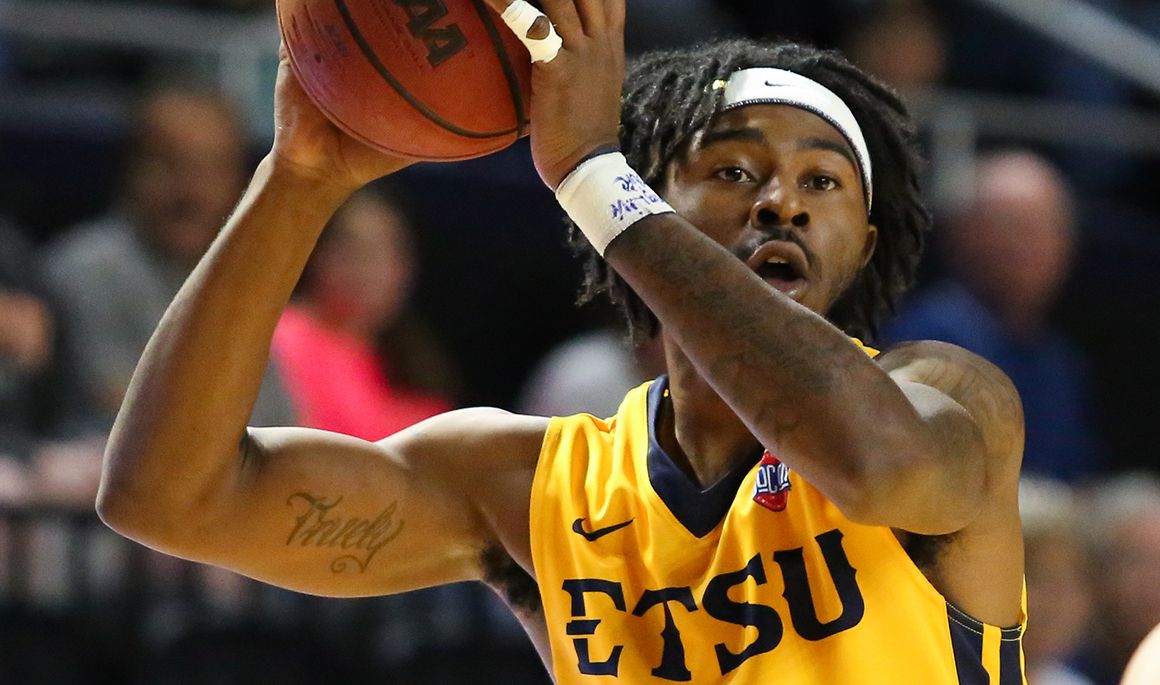 WILMINGTON, N.C. (Nov. 20, 2016) – A year ago, UNC Wilmington came to Johnson City and bested the Buccaneers by 21 points inside Freedom Hall. The Bucs made a better effort of it this season, but still came up short on the road against the defending Colonial Athletic Association champion.

Despite their best defensive effort of the season Sunday at Trask Coliseum, the Bucs committed 20 turnovers on the offensive end and scored 42 points below their season average, falling behind by as many as 18 points early in the second half. While ETSU did manage to rally and close to within five points of the Seahawks with four minutes left in regulation, the comeback stalled and the Bucs fell 68-59.

The Seahawks, a team that gave Atlantic Coast Conference power Duke a scare in the first round of the NCAA Tournament back in March, improved to a perfect 3-0 on the year with the victory. Meanwhile, the Bucs dropped to 2-1 on the young season.

“We were good enough defensively to win the game, but we played bad offense and couldn’t handle the ball,” said ETSU head coach Steve Forbes. “We knew we needed to defend and control the glass to have a chance to win today and we did that today. But having 20 turnovers and going 5-of-14 from the free throw line is not good. You can’t win on the road when you do that.

“This was a tough game and we want to schedule these kinds of teams early in the year. It will make us better. We came here to win and were good enough to win, but we just didn’t execute. This team has a lot of upside and I hope people see that.”

In the first half, the Bucs’ inside game kept the Seahawks in check and helped ETSU stay close at 12-12 with 11 minutes left before the break. However, at that point UNCW’s traditional pressure defense caused plenty of problems, forcing the Bucs into 11 turnovers for the half which powered a 23-11 run and gave the Seahawks a 35-23 advantage heading into the intermission.

Entering the game as the nation’s top field goal percentage team at 66.1 percent on the year, the Bucs shot just 35.7 percent from the field in the first half and did not have a player reach double figures. On the positive side for ETSU, the Bucs outrebounded the Seahawks 20-14 in the first half, with Mosquera-Perea putting up solid numbers with eight points and seven rebounds.

After the break, UNCW scored six straight points to pull ahead by 18 at 41-23, but the Bucs battled back by methodically cutting into the Seahawks lead and making it 61-56 with four minutes left in regulation. However, at that point another pair of turnovers and a 3-pointer by Flemmings ended the Bucs’ rally.

In the second half, the Bucs improved their shooting percentage and hit on 53.6 percent of their shots, and ultimately out-rebounded the Seahawks 39-29 for the game. However, ETSU also struggled at the free throw line, shooting 35.7 percent (5 of 14).

Defensively, the Bucs did hold the Seahawks to 21 percent shooting from the 3-point line and forced 11 turnovers.

ETSU will return to action on Friday at the Sanford Pentagon Classic in Sioux Falls, S.D., beginning that three-game event with a matchup against Milwaukee. Tip is set for 6:30 p.m. (EST). For more on ETSU men’s basketball throughout the 2016-17 season, visit ETSUBucs.com and click on the men’s hoops link.