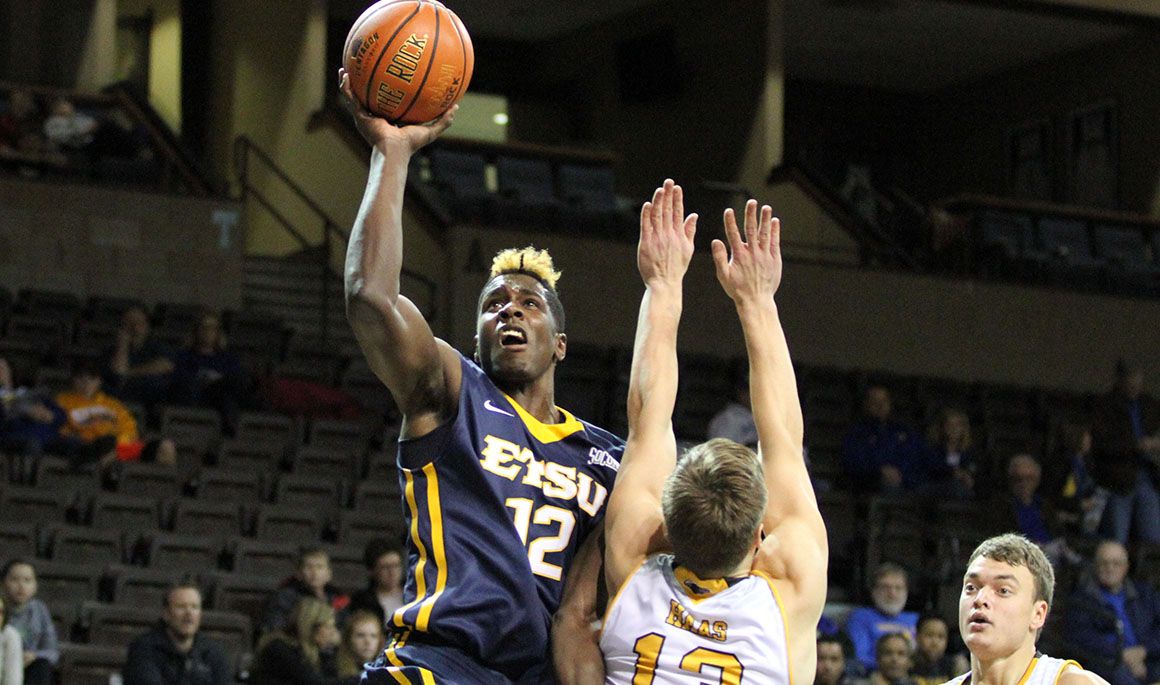 After going 1-of-6 from the free throw line and allowing the Milwaukee Panthers to shoot 63 percent from the field in the first half, the ETSU men’s basketball team improved to 15-of-21 from the charity stripe and held the Panthers to 18 percent shooting in the second half, as the Buccaneers cruised to an 86-62 win on the opening day of the Sanford Pentagon Showcase.

With the win, the Bucs improve to 3-1 on the season, while the Panthers dropped to 1-3. ETSU will move on to face South Dakota State on Saturday with game time set for 5:30 p.m. inside the Sanford Pentagon.

"I thought we went in at halftime and made some good adjustments – especially defensively,” said ETSU head coach Steve Forbes. “Our big guys started to control the rim too. We were blocking shots and playing the way we want to play. We were a little too three happy offensively in the first half, and I think once we started to settle down and play inside out that made the difference. We are capable of making threes, but the strength of our team is inside and that’s where the ball has got to go. We did that more as the game progressed.”

The Bucs indeed found their rhythm on both ends of the floor after the break, as the lockdown defense led to a 21-9 edge in points off turnovers, while the inside strength led to a dominating 46-22 advantage for points in the paint. ETSU ultimately finished with six players in double figures and every player on the Bucs’ bench scored points in the game.

However, despite shooting 55 percent from the field, the Bucs issues at the free-throw line allowed the Panthers to stay close. In fact, a 3-pointer from guard Brock Stull with five seconds left in the half made it 41-38 at the break. For the half, Milwaukee matched the Bucs hot shooting from outside by hitting on 63 percent of its shots.

After the break, the Bucs turned up the heat on defense, going to an aggressive 1-3-1, trapping zone defense to force multiple Milwaukee turnovers. ETSU cashed in on the offensive end, putting together an 11-1 run highlighted by a pair of 3-pointers from Payne, and building its lead to 58-42.

From there, the Bucs continued to stymie the Panthers’ offense, while also improving on their free throw shooting, going 11-of-12 at the line over the next eight minutes to build a 71-51 lead with seven minutes left in regulation. The Bucs never looked back at that point and went on to enjoy the 24-point victory.

ETSU will play again in the Sanford Pentagon Showcase on Saturday, facing host South Dakota State at 5:30 p.m. The third and final game of the event will be on Sunday, as the Bucs take on UC Irvine at 12:30 p.m. For more on ETSU men’s basketball throughout the 2016-17 season, visit ETSUBucs.com and click on the men’s hoops link.