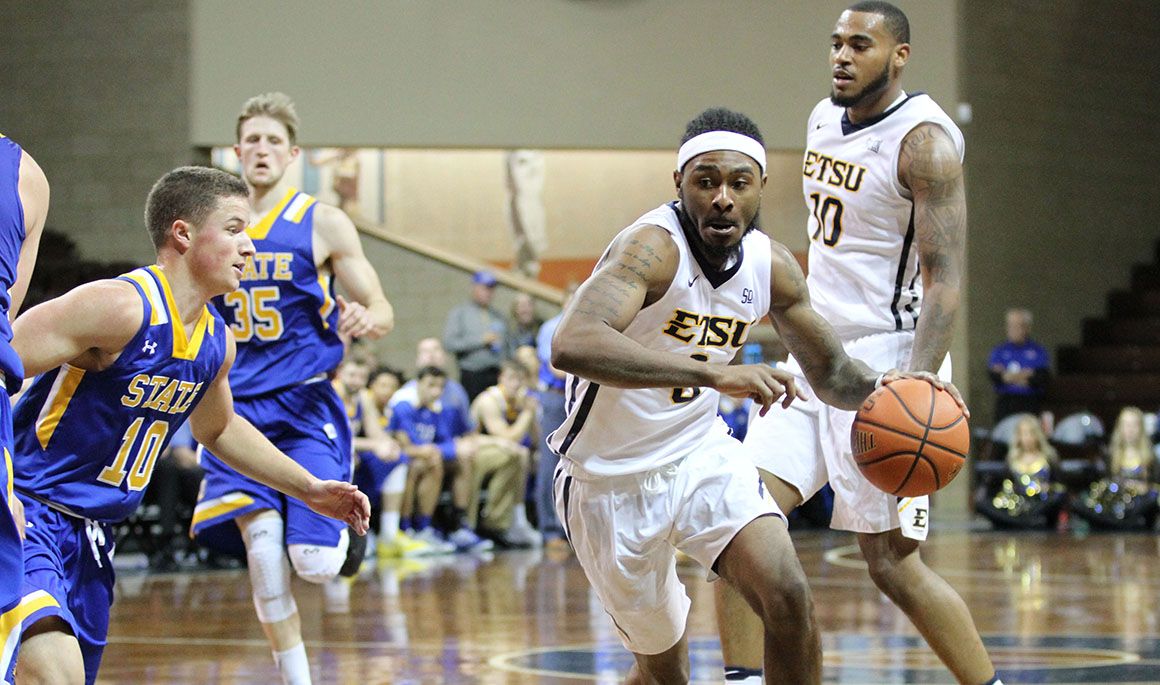 Led by a double-double effort from senior post Isaac Banks (New Orleans), a game high 22 points from senior guard T.J. Cromer (Albany, Ga.), and nine assists courtesy of junior guard Desonta Bradford (Humboldt), the Buccaneers built a 26-point second-half lead and held off a late rally by South Dakota State to take a 71-59 win over the Jackrabbits Saturday evening inside the Sanford Pentagon.

The Bucs, who are now 4-1 on the season, led wire-to-wire and have won two straight games at the Sanford Pentagon Showcase. The team will look to go undefeated in the event when they take on UC Irvine at 12:30 p.m. on Sunday. Meanwhile, nearby South Dakota State dropped to 1-6 overall.

“I’m really proud of our team because this was really a road game tonight,” said ETSU head coach Steve Forbes, whose team forced 20 turnovers and outscored the Jackrabbits 33-8 in points off turnovers. “We completely shut them down in the first half, and the shots they made in the second half came after we were up 26. When you are down like that you’re a bit more fearless with your shots. On the offensive end, I thought we did a good job of attacking their defense and it paid off.”

In the first half, the Bucs hit their first four attempts from 3-point range and built a quick 14-4 advantage, ultimately leading by as many as 13 before the intermission. However, despite the fast start, ETSU began to struggle with the Jackrabbits’ 1-3-1 defense and cooled off from the field, finishing with 10 turnovers before the intermission.

Even with those struggles offensively, the Bucs still shot 44 percent from the field and played solid defense for the second straight day, holding South Dakota State to a 26 percent clip shooting in the first half. Those efforts on the defensive end were key to the Bucs holding a 32-22 edge at the break.

In the second half, the Jackrabbits cut the ETSU advantage to seven at 33-26, but at that point the physical play led to a string of technical fouls on one play, with the Bucs getting one and the Jackrabbits being hit twice for overly aggressive behavior. Cromer hit both technical free throws and ETSU went to a full court defense, powering a stretch where the Bucs outscored the Jackrabbits 25-8 to lead 60-34 with 10:18 left in regulation.

Unfortunately for the Bucs, South Dakota State did not go away, putting together its own 18-2 run to pull to within 10 at 62-52 with 4:05 left. After going nearly six minutes without a field goal, the Bucs finally got back on the scoreboard in the final two minutes to pull away, 71-59.

For South Dakota State, sophomore post Mike Daum, who is considered an NBA prospect, paced his squad with 17 points and 10 rebounds.

ETSU will play for the final time in the Sanford Pentagon Showcase on Sunday, as the Bucs take on UC Irvine at 12:30 p.m. For more on ETSU men’s basketball throughout the 2016-17 season, visit ETSUBucs.com and click on the men’s hoops link.