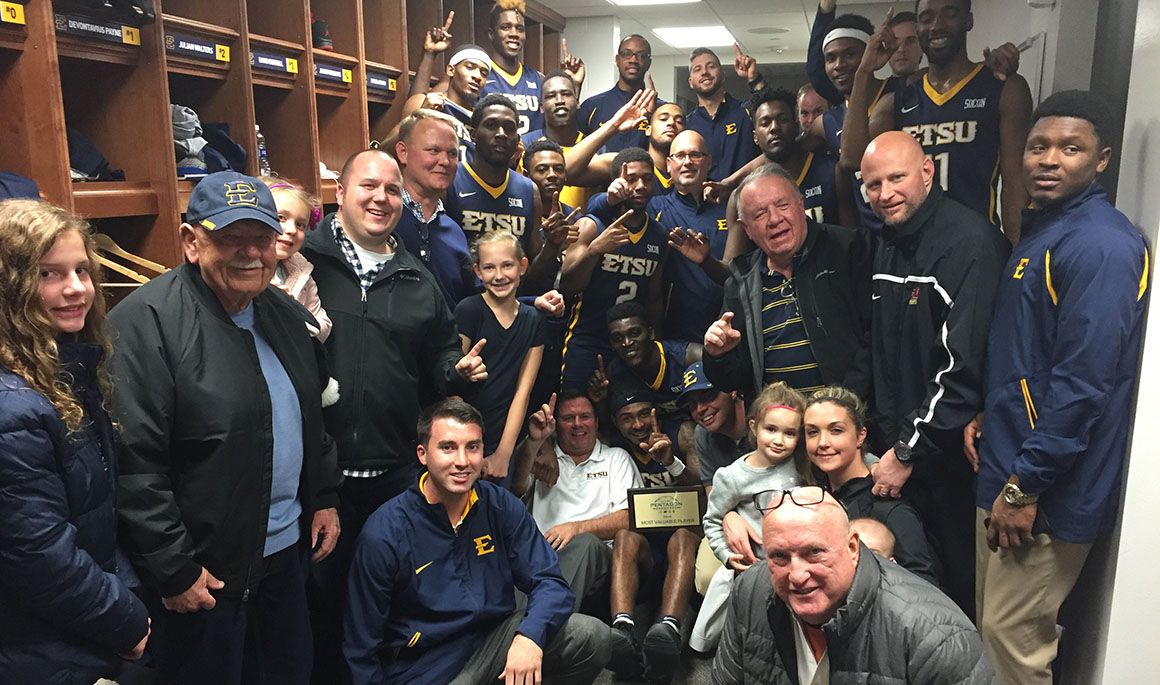 SIOUX FALLS, S.D. (Nov. 27, 2016) – It was not easy, but the ETSU men’s basketball team will return from South Dakota with a three-game sweep of the Sanford Pentagon Showcase.

After cruising to wins on the first two nights of the holiday event, the Buccaneers needed to grind out a win on Sunday, overcoming an eight-point second half deficit to put away UC Irvine 72-66 at the Sanford Pentagon. The Bucs were led by 15 points from senior guard T.J. Cromer (Albany, Ga.), while junior guard Desonta Bradford (Humboldt) and senior post Tevin Glass (Norcross, Ga.) added 14 and 11 points, respectively.

With the win, the Bucs will return home from South Dakota with victories over Milwaukee, South Dakota State and UC Irvine, along with a 5-1 overall record on the season. Meanwhile, the Anteaters drop to 3-4 on the year.

“It was definitely a grind them out game today,” said ETSU head coach Steve Forbes. “UC Irvine has a good team and I told our guys that today. They came out and played hard. They took it to us early, but we battled and battled, and we turned it up in the second half with the press. That made a big difference I think, just getting the game up and down the floor. We turned them over 18 times and that was a key for us.”

The Bucs saw Cromer named most valuable player of the event, while Bradford earned all-tournament honors.

Having struggled offensively in their first two games at the Sanford Pentagon Showcase, the Anteaters shot an impressive 57 percent from the field and 83 percent from 3-point range in the first half against the Bucs. Those surprising numbers allowed the Anteaters to hold a 34-31 lead at the halftime break, marking only the second time this season that the Bucs have trailed an opponent after 20 minutes of play.

In the first half, Glass stood out for the Bucs, scoring a team high 10 points, while grabbing two steals and collecting three rebounds against UC Irvine’s imposing post players.

After the break, the Anteaters stretched their advantage to their largest of the game at 41-33, but from there the Bucs went to a full-court defense to try and pick up the pace of the game. The strategy worked, as the Bucs outscored UC Irvine 17-6 over the next seven minutes of play to retake the lead, 50-47.

Later on with the game tied at 55, the Bucs went on an 11-3 run to pull ahead by eight at 66-58. While the Anteaters managed to get back to within one possession at 66-63 with 30 seconds left in regulation, the Bucs hit their foul shots and made defensive stops down the stretch to ice away the win.

For the game, ETSU shot 47 percent from the field, but were just 23-of-35 from the foul line. Those numbers at the charity stripe did improve in the second half, going from 50 percent in the first half to 73.9 percent after the break. The Bucs also got a lift off the bench from junior guard Julian Walters (Madison, Wis.), who hit three clutch 3-pointers throughout the game and finished with a career high nine points.

For the Anteaters, Ioannis Dimakopoulos led all scorers with 21 points, while Jaron Martin added 19 in the losing effort.

After four straight games away from home, the Bucs will return to Freedom Hall to host Lees-McRae College on Thursday night at 7 p.m. For more on ETSU men’s basketball throughout the 2016-17 season, visit ETSUBucs.com and click on the men’s hoops link.