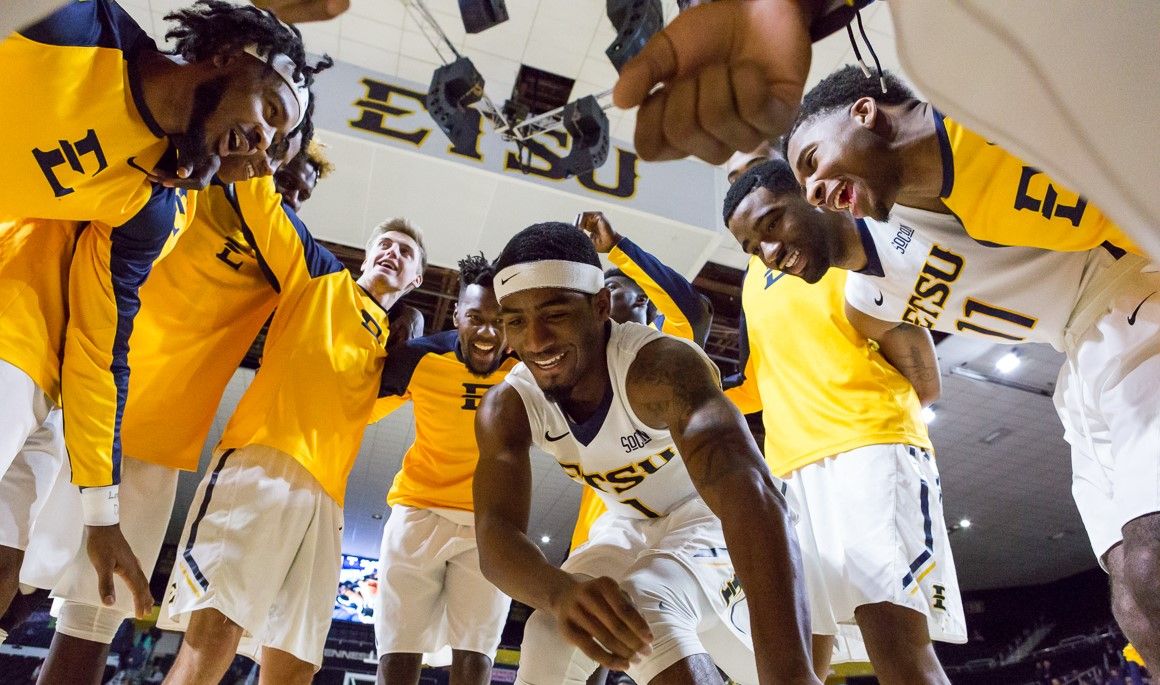 In the huddle with the Bucs prior to Sunday's game with Limestone.
Bucs off to best start since’90-’91, blast Limestone, 85-57
Limestone at ETSU | 0,
Related Links

With an 85-57 win over Limestone College Sunday afternoon inside Freedom Hall, the 2016-17 Buccaneers moved to 7-1 on the season, marking the program’s best start to a year since the 1990-91 squad opened at 14-1. Senior guard T.J. Cromer (Albany, Ga.) led the way for ETSU on this day, scoring a game high 21 points, while fellow seniors A.J. Merriweather (Jackson) and Isaac Banks (New Orleans) added 11 and 10 points, respectively.

“I thought our guys played really well today,” said ETSU head coach Steve Forbes. “There was a lot more attention to detail out there tonight and we stayed really focused. After not playing very well on Thursday, I thought our preparation over the last two days was good and we were locked in today.”

After having trailed Lees-McRae at halftime on Thursday night, the Bucs fared much better against their second straight opponent from Conference Carolinas. This time, the Bucs jumped ahead early and led by as many as 16 late in the half, taking a 41-30 advantage into the intermission.

Before the break, the Bucs shot 50 percent from the field and were led by nine points each from Cromer and Merriweather. ETSU also outscored the Saints 24-10 in the paint and 12-3 in points off turnovers, while holding a 19-14 rebounding margin prior to the break. A 4-of-10 clip from 3-point range helped Limestone keep the Bucs within range.

In the second half, a barrage of four straight 3-pointers from Cromer ignited the Bucs offense and put ETSU up 53-40 with 13 minutes left in regulation. From there, the lead stayed relative unchanged until the Bucs put together a 10-0 run with six minutes left to extend the advantage to 72-48 and put the game on cruise control.

For the contest, the Bucs held advantages in most every statistical category, including points in the paint (36-24), points off turnovers (17-14), second chance points (22-4), fast break points (19-4), and bench points (51-29). ETSU also outrebounded Limestone 46-26, shot 49 percent from the floor, 46 percent from 3-point range and 87 percent at the foul line. Individually, junior guard Desonta Bradford (Humboldt) dished out a game-high eight assists, while Cromer provided four as well. In addition, Banks and senior post Tevin Glass (Norcross, Ga.) had a team high seven rebounds each.

Limestone was led by 12 points from Macoumba Kane and 11 from Shaun Stewart. The Saints shot 39 percent from the floor and just 43 percent at the charity stripe on the night.

The Bucs will now hit the road for three straight games, beginning Dec. 10 at Atlantic 10 foe Dayton, followed by games at SEC opponent Mississippi State (Dec. 14) and Ohio Valley Conference member Morehead State (Dec. 17). The team will be back home again on Dec. 22 to host SEC foe and in-state rival Tennessee in a long-awaited matchup with the Volunteers. For more on ETSU men’s basketball throughout the 2016-17 season, visit ETSUBucs.com and click on the men’s hoops link.