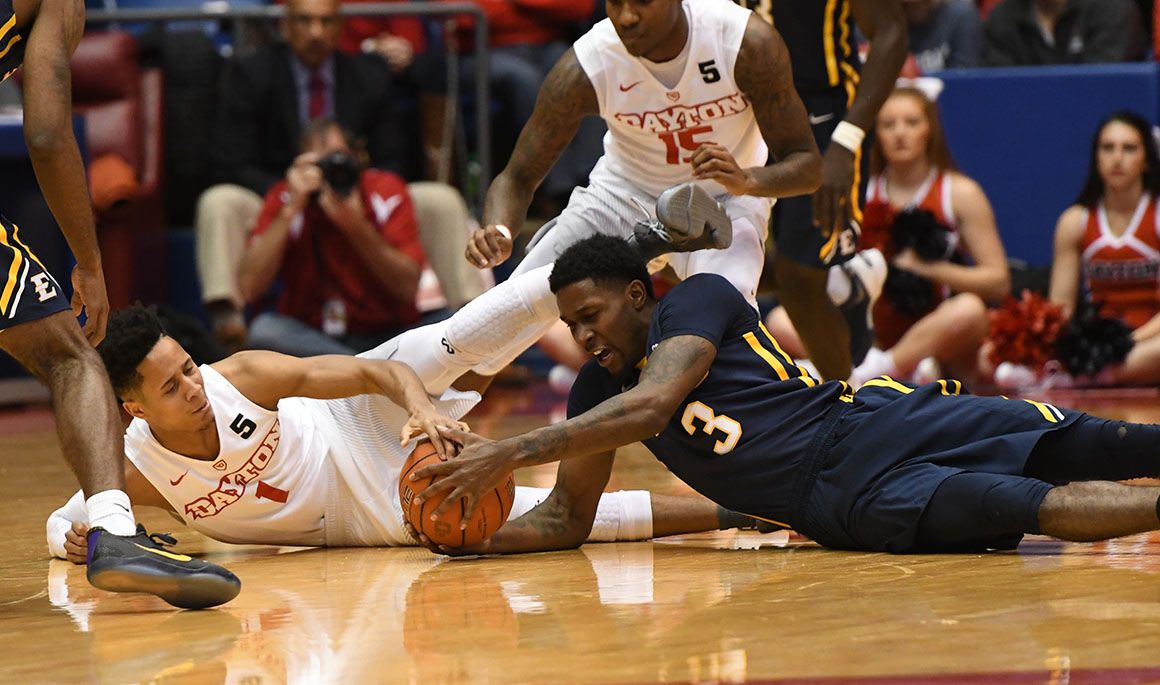 DAYTON, Ohio (Dec. 10, 2016) – There is a reason the Dayton Flyers were the preseason pick to win the Atlantic 10 Conference.

Forcing 18 turnovers and holding the ETSU men’s basketball team to 36 percent shooting on the night, the Flyers glided past the Buccaneers 75-61 Saturday afternoon inside the UD Arena. With the loss, the Bucs dropped to 7-2 on the season, while Dayton improved to 7-2.

“Our turnovers led to too many transition scores for them and we didn’t respond well to their physicality,” said ETSU head coach Steve Forbes. “That was the story of the game. We defended them well in the half court, but they kept getting down the court for transition scores. Those are atomic bombs when you let them do that.”

The Bucs, who won 73-68 when they last visited UD Arena back on Dec. 1, 2010 and are now 1-2 all-time against the Flyers, did not fare as well on this night. Dayton’s Charles Cooke finished with a game-high 24 points and teammate Kendall Pollard posted a double-double courtesy of 12 points and 12 rebounds, as the Flyers built a 12-point halftime lead, shot 50 percent from the floor for the game, and never looked back from there.

For ETSU, juniors Desonta Bradford (Humboldt) and David Burrell (Milwaukee, Wis.) were the only players to reach double figures with 12 points each. The Bucs finished the game being outscored 50-24 in the paint, 21-10 off turnovers, and 23-7 in fast break points.

In the first half, the Bucs struggled with ball control and getting back in transition defense. The result was a 26-10 advantage in the paint and 14-7 edge in points off turnovers for the Flyers. In all, ETSU committed 12 turnovers in the first half and shot just 32 percent in the opening 20 minutes of play.

While it was close at 16-15 following a basket by Burrell at the 11:12 minute mark, the Bucs would go nearly four minutes without a field goal at that point. The result was a pair of 7-0 runs that pushed the Flyers up by as many as 15 at 37-22. The Bucs managed to close the half with a 3-pointer by junior guard Devontavius Payne (Carbondale, Ill.) to trail 37-25 at the break.

After the intermission, Dayton showed no signs of letting up and the Bucs continued to struggle offensively with three more turnovers over the first three minutes. The Flyers took advantage to push ahead with its largest lead of the game at 46-27 with 15:59 left in regulation.

The Dayton lead would increase to as many as 24 with 8:29 left in regulation, but at that point the Bucs put together a 7-0 run and had a 3-pointer rim out that would have cut the Flyers’ advantage to 13 with six minutes left. Instead, Cooke nailed a 3-pointer to end any ETSU hopes of a miraculous comeback.

For the game, Dayton out-rebounded the Bucs 39-33, while committing 16 turnovers. One bright spot for the Bucs was a 30-20 advantage in bench points.

The Bucs will move on and continue with the second of three straight road games on Wednesday, Dec. 14, when they travel to face Southeastern Conference foe Mississippi State at 8 p.m. in Starkville, Miss. For more on ETSU men’s basketball throughout the 2016-17 season, visit ETSUBucs.com and click on the men’s hoops link.